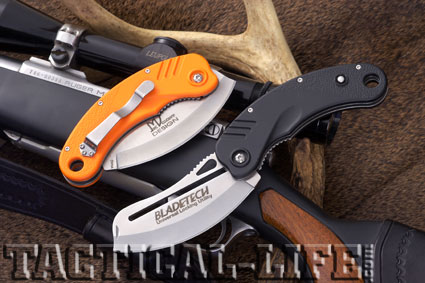 Try sitting in a deer stand on a cold and crisp morning and you will soon find your mind wandering from one thought to another. There are those who claim that hunting today is nothing more than a blood sport and some even say it is a barbaric pastime that should be outlawed. However, many of us find hunting season as a time when our souls are at peace and we can bind with those who have gone before us by practicing the same traditions. This past season brought me a little closer to those who once depended on the hunt to survive long enough to evolve for better or worse, into modern man. I was field-testing a knife design that dates back more than 3,000 years. To add a bit of spice to the adventure, the knife I was testing was a marriage of an old design to the latest innovations of cutlery technology. 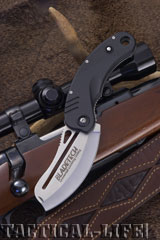 Traditional Inuit Knife
Blade-Tech recently introduced their “Universal Locking Utility knife,” ULU for short. To anyone who has studied knives, the name Ulu may seem somewhat familiar. The Ulu is a knife associated with the Inuit people of Alaska and Canada and dates back to when blades were made of stone and handles were wood, ivory or bone. The design of the Ulu is rather unusual by today’s patterns but it makes perfect sense after you study it for a few minutes. You have a curved cutting surface with nothing more than a handle of natural material attached to the top to aid in grasping. Think about it and you will realize that is only one step beyond the time when man used nothing more than a shard of stone for his knife. One point to bring out is the mistake I just made. The translation of the word Ulu is “woman’s knife.” Men may have been the hunters, but women were the ones doing all the work. The Inuit “bubba” would go out and bag his seal or walrus but once he got it home, the women would handle skinning and butchering. Then they prepared the meat and hides using their favorite tool, the Ulu. The lifestyle of the Inuit people is an interesting subject and deserves further research, but I have a new knife to review and limited time and print space.

The Blade-Tech ULU keeps the blade pattern of the old but expands on the handle utility by offering you two modes of use. First, you can swing the blade out of the handle, using the thumbhole for one-handed opening, and it will lock in place with a stout liner-lock mechanism. In this mode you have what you and I would consider a traditional liner-lock knife. The 4-inch blade has a wide curve providing a substantial belly to the knife. Although somewhat blunt in appearance, the blade does have a small usable tip.

For a more traditional Ulu configuration, simply open the blade to the point where it is just about ready to lock in place. Then slide the blade back into the handle. Thankfully, the enclosed instructions give a much better description on this process. To complete the package, the scales are aluminum with a rubber coating and pocket clip. The rubber coating comes in black, gray and orange and the blade comes razor sharp.

It was obvious that you could have fun playing with the opening mechanism but Blade-Tech had more in mind when they designed this knife. The original Ulu knives were designed as a utility tool by a group of people that took outdoor life seriously. They either knew the skills to survive or they died in the wilderness. Since the Inuit people still exist, they must have known more than I about the wilderness, but I was about to have my chance to test their cutlery knowledge. A week of hunting allowed a direct comparison to tasks these people probably faced every day.

Deer Hunting Field Test
The second day of the gun season brought a volley of shots from one end of the valley to the other. By midday, three out of the four of us hunting had a deer in need of processing. My father-in-law had no objections to my cleaning his deer and Mike, my hunting partner of more years than either of us wants to admit, set out for a little direct comparison of this new knife to a couple of more conventional knives I was testing for another article. The Blade-Tech ULU was used both in the style of a traditional liner lock and opened as a true Ulu pattern. I did notice that for the skinning, the Ulu style performed rather well. It did take a little adjustment for us, using a knife with the handle directly above the blade. It felt odd at the beginning, but it wasn’t long before we found ourselves handling the knife with a little more confidence. In making deep cuts around the backstraps the knife worked much better in the traditional liner-lock mode. If you desire to flesh out a hide, the Ulu style is the only way to go. You can supply an equal amount of pressure to both ends of the blade to prevent slicing through the skin. After a couple of deer, about the only advantage another knife had over the Ulu was the fact that I was more familiar with using a traditional hunter.

As much as I would like it to be different, hunting and butchering deer is only a part of life. In the evenings we used the ULU in the kitchen for about everything we could imagine. Slicing vegetables was a breeze with the large curve in the blade and after butchering a few deer, cutting steaks was no problem. If it felt awkward in one mode, a simple pull would transform it back into another shape. Trying to spread butter with an Ulu can be a messy operation but then, I doubt the Inuit use butter. While the deer had failed to dull the blade, it didn’t take long before the ceramic plates took their toll. I was happy to find that only a few strokes on a set of crock sticks brought the knife right back to factory sharpness.

Real Utility Work
The next few days brought forth tasks from cutting rope to hacking small limbs. In one mode or another the ULU performed. In fact, stabbing is about the only chore I found difficult to perform. The finish on both the blade and handle scales showed no signs of wear and after a little cleaning, the two samples could be sold as new. I will admit to removing the pocket clip on one of the knives. It just felt better to me but a lot of that has to do with the fact that I’m left-handed. Opening the knife with either hand was no problem, but if you’re a lefty, you’ll need two hands to close it.

The Blade-Tech ULU may look a little odd compared to your standard hunting knife but it proved to be a versatile tool. With a retail price of $49.95 it is also a great value. You don’t need to tell your wife that Ulu means “woman’s knife” and I wouldn’t suggest that you go out and bag your deer, drag it home and flop it before your wife with the words “fix it, woman.” But I will suggest that if you feel the urge to relate to the past without giving up the features of the present, try out the Blade-Tech Universal Locking Utility Knife.