0
SHARES
26
VIEWS
Share on FacebookShare on Twitter
One of the more memorable moments in my writing career happened at the SHOT show a decade or so ago when I had the chance to meet Mikhail Kalashnikov (the AK-47 designer), Eugene Stoner (creator of the M-16), Col. Rex Applegate and Bill Jordan, all in the same booth. Being able to sit down and talk shop about firearms with this legendary group made me feel a little like a high school football player discussing the sport as an equal with a group of retired Green Bay Packers. 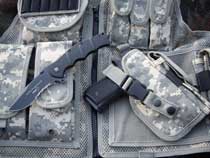 For all the millions of AK-47 and AKM-47 rifles, RPK squad autos, and belt-fed PK machine guns produced around the world, Kalashnikov has never received a single Russian ruble in royalties. In the beginning he was only too happy to do his part in defeating the German army (Yes, I know the war was over before the AK-47 went into production. Kalashnikov began work on the project while the battle was still raging and he had no way of knowing when, or even if, the Allies would prevail). In recent years, he has been forced to search for ways to supplement his modest military pension. One of these ventures has been to lend his name to several knife lines produced by the German company Boker.