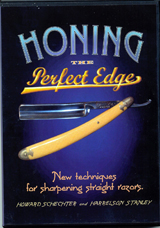 I’ve been told old fashion straight razors are seeing something of a revival among shavers. It is a fact that a properly sharpened razor can offer one of the smoothest, cleanest shaves around. But unlike modern disposal blades, if you are going to use a straight razor, you are going to be required to learn how to hone it yourself.

For those not familiar with the DVD’s creators, Howard Schechter operates “The Perfect Edge” website, specializing in Belgian coticules sharpening stones and Harrelson Stanley is the U.S. importer of Japanese Shapton waterstones. Taking a rusty, antique straight razor with a chipped edge, they restore the blade to perfect condition by working their way from a 1,000 grit Shapton hone up to an incredibly fine 30,000 grit hone. To prove that point, at the end, Stanley uses the blade to shave off two weeks worth of beard.

Though it is hard to argue with the final results, I wish they had spent more time on explaining the edge-to-stone angle they were using with the razor. From years of experience sharpening blades, I think I understand how the razor was being worked across the hone, but I’m not sure everyone would. I also found it interesting the blade was not finished on a leather strop. Apparently the 30,000 grit hone alone produces a functional shaving edge.

Even if you never intend to take up shaving with a straight razor, it is impressive to see what the Shapton waterstones are capable of. Just think what they would do for your other cutting tools! 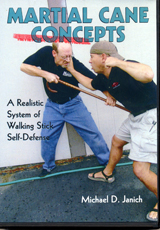 As most people trained in Filipino martial arts will tell you, there is a close relationship between blade and stick work. It is also a fact that a long stick tends to be the ideal weapon for confronting a short knife. Probably the main problem with carrying a cane for self defense is that it is hard for anyone under 50—lacking obvious physical impairments—to justify it to the authorities.  On the other hand, once a person reaches a certain age, federal law is totally on the side of the individual that feels they require a walking aid.

I have noticed that “cane-fu” has become something of a fad with senior citizens. The down side is that many of these martial arts schools seem overly complicated for their intended students. Using a “keep it practical” approach, Mike Janich offers a cane based self-defense system specifically geared toward anyone with physical limitations including limited strength, reflexes and speed.

After observing that traditional stick-fighting methods require training and abilities beyond the grasp of the average cane user, Janich teaches an uncomplicated sequence of techniques that can be applied in a wide range of street situations. There is no fancy stuff in “Martial Cane Concepts,” no throws, flips or locks. Just solid information on choosing the best cane for self defense and how to most efficiently strike, thrust and block with it. Predators single out the weak and vulnerable. Having a heavy walking stick and giving the impression you are ready and willing to use it is going to make many street animals look elsewhere for prey.

Emergency: This Book Will Save Your Life
by Neil Strauss 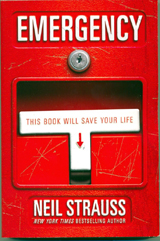 Neil Strauss had a strange epiphany during the aftermath of hurricane Katrina and its destruction of New Orleans. Unlike many urban liberals who simply blamed it on the president, he suddenly realized that there were some emergencies that were simply too large for the government to effectively deal with. The experts he subsequently interviewed were also in total agreement that he should be ready to survive on his own for an unknown period of time before any help could reasonably be expected. With that in mind, the author decides to go on a quest for the knowledge to weather any and all possible calamites.

While Strauss seems a little fixated on obtaining a second passport from another country as a last ditch escape route, many of the schools and training programs he graduates from will be very familiar to Tactical Knives readers. Gunsite teaches him to shoot a handgun, Kevin McClung (Mad Dog Knives) gives him private classes on making and using knives, Tom Brown and Christopher Nyerges teach outdoor survival, and Kelly Alwood escape techniques. Eventually, he also earns emergency medical technician certification and works on a Los Angles city ambulance.

Although I certainly don’t agree with the author’s seeming willingness to flee the U.S. in any major national emergency, it is interesting reading his perspective on these various training programs and the people that run them. It is also worth noting he feels his training was of value simply for the resulting peace of mind it provided. It is far better to be prepared for trouble and never use it than be totally at the mercy of others when problems arise.