If you have been reading Tactical Knives very long, you are probably aware that many writers have made a near religion out of the cutting tools used by the celebrated outdoor and camping writers “Nessmuk” (George Sears) and Hoarse Kephart. And as I’ve pointed out at least once in the past, Nessmuk published his only how-to-book, Woodcraft and Camping, 125 years ago! Kephart is a little more recent but most of his books were released in the early part of the 20th century. Given a choice, I personally would prefer to use something just a little more contemporary for a guide book. Writers like John Jobson, Bill Riviere, Calvin Rutstrum, Sigurd Olson and Bill Mason have long been some of my favorites but they to have all passed on now. But another of the classic camping and canoeing writers is still very much alive and kicking. His name is Cliff Jacobson. 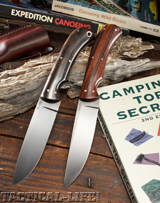 The Bibles of Wilderness Canoeing
Rereading Cliff’s Canoeing Wild Rivers and Expedition Canoeing has long been my first step when planning any of our own wilderness paddling adventures. Not only is Cliff a true backwoods expert, he comes from a forestry background like myself (he once worked in the woods around Coos Bay, Oregon) and he likes knives! When others were fixating on the perfect “Nessmuk trilogy,” I was following the evolution of Cliff’s preferences in outdoor knives.

If you go to the knife section of Canoeing Wild Rivers (copyright 1984), you find Cliff was then favoring a Puma “Plainsman” folding lock-back. This was the (now discontinued) wood handled version of the 4-7/8-inch closed Puma Prince, which in turn is a clone of the Buck 110. Like TK contributor John Larsen has pointed out in the past, some users considered the Puma superior to the 110 because of the lanyard hole in the butt of the handle. I also found it interesting that at that time, Jacobson considered stainless steel was the way to go on a canoeing knife. He has since changed to a die-hard carbon steel user.

In Expedition Canoeing (copyright 2001) he states that he converted from the folder to a series of fixed-blade sheath knives after reading the works of Canadian canoe legend Bill Mason. Bill long felt that a sheath knife was safer than a folder because it didn’t require opening during a boating emergency. Cliff’s first sheath knife seems to have been the classic Gerber Armorhide Shorty (there is a newer model called the “River Shorty” but this is a different knife all together) with a 4-¾-inch tool steel blade.

Peanut Butter Controversy
I think it was during this period that Cliff made what has become one of his most controversial statements on cutlery. While discussing suitable blade length, Cliff suggested that a sheath knife should be “long enough to reach the bottom of a peanut butter jar.” Hoards of self-proclaimed wilderness experts instantly started ridiculing the idea of anyone having something as mundane as peanut butter on a canoeing trip (I’m not sure what these individuals do eat in the woods, but I’m sure it must be something like fresh killed buffalo hump roasted on a stick over an open fire). From what I understand, Cliff was simply pointing out there are limits to how short a practical field knife can be.

Cliff’s next two sheath knives were the flat-ground version of the Grohmann/D.H. Russell Canadian Belt Knife and Idaho Mountain Knifeworks “Cliff.”  Jacobson was instrumental in convincing Grohmann to first flat-grind the Russell Canadian, a design variation that has since been offered in several other of the company’s models. Like Cliff, I feel a flat-grind cuts with less resistance on flesh, hide, fish, wood and the other materials normally found in the wilds. In fact, I later convinced Grohmann to flat grind their Model 4 Survival model!

Idaho Mountain Knife Works’ Cliff was more inspired by the original Gerber Shorty. The flat-ground 15N20 “sawmill bandsaw” high-carbon steel blade is 4-¼-inches long  and is offered in a variety of hardwood handles. The standard model is 3/32-inch thick but there is also a heavier 1/8-inch thick “Hunter” version for those that feel they require more strength.

Enter John Bradley
While all of these are totally functional field knives, I was intrigued when I recently noticed that Piragis’s Boundary Water Catalog was offering yet another knife designed with Jacobson’s input. The new knife is handforged by Mastersmith John Bradley from 52100 carbon steel. Its 4-½-inch blade is of a slightly dropped-point pattern and handled in a choice of light or dark hardwood. All knives come in a hand-stitched leather sheath. Piragis is modestly cataloging this item as their “World’s Finest Camp Knife.”

When I contacted Bradley about doing an article on the knife, he also included a second version with a slightly different point style he personally liked better. Frankly, I don’t see enough difference to worry about it. The Bradley/Jacobson model’s blade is very close to the Idaho Mountain Knife’ Works Cliff but is 1/8-inch thicker than the standard model from IMKW. Picking between the two might depend on how you personally balance thin-bladed cutting performance against strength. The 4-¼-inch long handle offers a more contoured grip than the Cliff and, despite its rather short length, felt very comfortable in my hand. At 7 ounces, the knife also seemed right for hikers and backpackers. Piragis catalogs the model at $275.

52100 Steel
As most serious knife lovers know, 52100 ball bearing steel was first made famous by Mastersmith Ed Fowler as his personal choice in blade material for his handforged blades. While a lot more goes into a superior knife than simply having the right steel, it is always an excellent building block. Running the Bradley knife through my standard battery of cutting tests, I was immediately impressed with its edge geometry. To give a comparison to evaluating hunting rifles, if you accept that 2.5-inch groups at 100 yards are “adequate” for game at normal ranges, this knife is the equivalent of a 1-inch grouper. I found I could easily slice about three quarters of the way through a 1-inch manila rope with a single pass. It also passed all of my whittling tests on both green and seasoned hardwood. If you need to make a large pile of shavings to start a fire quickly or rough out an emergency canoe paddle from hand-hewn maple plank, this is the knife for you.

Picking a Wilderness Knife
Cliff’s comments on knives in Camping’s Top Secrets 2nd Edition (copyright, 1998) set down certain criteria for a camping and canoeing knife. He felt the blade should be between 4 and 5 inches in length to allow it to slice meat, cheese and “reach to the bottom of a peanut butter jar.” It should also be thin. One-eighth-inch is the maximum spine thickness he is willing to accept. He seems to prefer lower Rockwell hardness levels, something around 56 to 59 is suggested as ideal and he has no use for serrated edges. Other than those loose specs, he still thinks something along the same lines as the Gerber Shorty is still near perfect. The Idaho Mountain Knife Works Cliff was obviously designed with that in mind and the Bradley knife’s blade follows the same general pattern.

If you are trying to pick a wilderness canoeing and camping knife, whose advice would you rather take? Someone that has been an outdoor professional for close to 50 years, published over a dozen books on the subject, serves as a wilderness consultant for agencies in both the U.S. and Canada and continues to guide wilderness canoeing and camping trips? Or the guy that goes by the web name “Grizzle Bear Scat” and has 12,367 posts on a cutlery forum?