4
SHARES
153
VIEWS
Share on FacebookShare on Twitter
In 2010 the Czech Armed Forces selected the CZ 805 Bren A1 assault rifle along with a new combination bayonet/tactical knife to arm their military forces. STEVE WOODS PHOTO

The bayonet has always been a frighteningly effective battlefield implement. It still is, as shown on 21 May, 2004, when two unarmored vehicles with approximately 20 Argyll and Sutherland Highlanders were ambushed by over 100 Mahdi Army militiamen about 55 miles north of Basra, Iraq. Forced to dismount and engage the numerically superior force firing machine guns, RPG’s and mortars from prepared positions, the British troops radioed for support from the main British base at Camp Abu Naji who responded by sending a few troops from the Princess of Wales regiment.

The specter of being overrun and annihilated loomed large as the supply of coalition ammunition ran low while the larger force of militia maintained a steady stream of direct and indirect fire on the British position. With few options left, over the cacophony of modern battlefield musketry Color Sergeants shouted the spine-stiffening command of “Fix…SWORDS!” For a short pause all that was heard was the slithering of steel on steel as bayonets clicked on to rifle barrels, and soldiers in the best traditions of the British Army who perfected the bayonet charge in the 18th century prepared once again to “go over the top.” At the command, “CHARGE!” for the first time in over 20 years the small British force leapt up, and as their ancestors did at Waterloo, Rorke’s Drift, Ypres and El Alamein, they faced the enemy blade-up and point-forward. The insurgents of the Mahdi Army reacted as most soldiers did when faced with British cold steel; they broke and ran, threw their hands up or were cut down where they stood. About 20 militiamen were killed in the 200-yard assault and subsequent hand-to-hand fighting—without any British deaths and only three wounded. 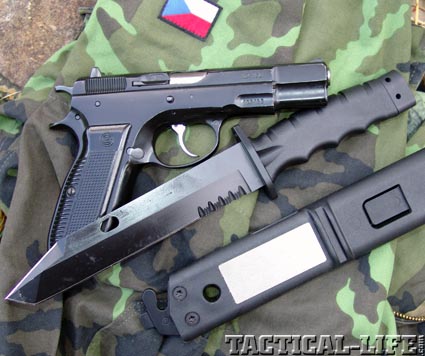 One story of how the bayonet was first used was in mid-17th century rural France where the peasants of the Southern French town of Bayonne, having run out of powder and shot during an armed engagement, placed the handles of hunting knives in the muzzles of their muskets. Hence the bayonet. Most armies realize that bayonet charges are not a primary element of modern warfighter strategy, so with few exceptions, the modern bayonet is wielded primarily as a multipurpose sheath knife. The newest modular (assault/combat bayonet or tactical knife) has an original design by Česká zbrojovka a.s., which brilliantly combines the necessary utility of a general-purpose edged tool and fighting knife with the ability to attach it to the Czech armed forces’ CZ 805 battle rifle. 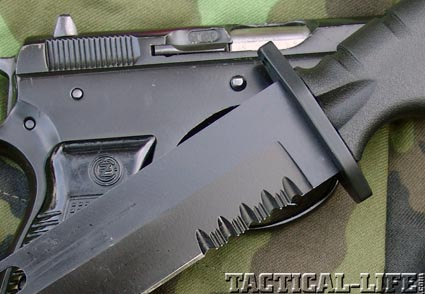 The CZ 805 Tactical Knife is a modular bayonet/knife made with high cobalt content steel. It has a thick, beautiful angular tanto blade that many prefer as best for both fighting and field work. The polymer handle has generous grooves and swells that position the hand for a very secure grip wet or dry, night or day. By removal of a short bolt in the butt of the bayonet, the butt, handle and guard can be slipped off to leave blade bare. That means the large ring guard meant to go around the CZ 805 flash suppressor with its butt attachment hardware can be swapped with a simple guard and plain butt when needed. That also means (and I like this a lot) that when the bayonet needs to be cleaned after immersion in water, there will be no trapped moisture underneath a riveted-on handle to start corrosion.

The CZ 805 Tactical Knife uses the latest Cobalt steel N690 formulation by the Austrian steel manufacturer Bohler. Its composition is chromium, carbon, molybdenum, cobalt, manganese, silicon and vanadium. The addition of Cobalt to the steel allows the creation of a very uniform structure and high hardness, while the Chromium and Vanadium enhance edge-holding capability similar to the formulations of ATS-55, VG-10 and 440C steel. When hardened to a factor of Rc 58-60, the super-fine grain of N690 blade steel provides for enhanced edge retention while maintaining its ability to be resharpened by the user when desired. At about thirteen and a half ounces, the CZ 805 Tactical Knife has the balanced heft to give its tanto point the inertia to go deep when needed. The 7.5-inch blade is long compared to some other combat sheath knives, but its length allows for more general applications like prying and chopping. The strength of a tanto blade is in its thick spine. The CZ 805 Tactical Knife has a quarter-inch thickness that ensures the blade will not flex in use and can be readily hammered to cut through a limb if needed. 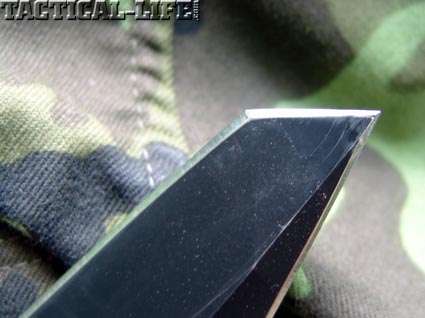 The tanto chisel-point design is one of the best for maintaining blade strength and point protection while being very effective for piercing even metal. That makes the blade useful for everything from chopping wood to close combat, or even cutting yourself out of an aircraft fuselage. The serrations near the base are useful to cut line, rope, or nylon ties. Altogether the blade design is nearly perfect. The CZ 805 Tactical Knife has a tang from the pommel all the way through the handle, so when a user gives it a great deal of side loads while prying or levering they don’t end up holding half a knife.

It also has a rubberized texture with finger grooves makes sure the holder knows by feel the orientation of the knife and the hand is positioned just where it needs to be for holding blade-up forward, blade-down backwards or for close in precise cutting. The CZ 805 Tactical Knife can be disassembled for detailed cleaning and lubrication, plus it has a protective anti-corrosive black coating that reduces unwanted glint.

The CZ 805 Tactical Knife has holes both in the pommel and guard for either securing a lanyard or to lash the bayonet/knife to a pole for use in survival situations or as needed in the field.

The CZ 805 Tactical Knife has a polymer sheath that can be carried or mounted in almost unlimited ways, but can be used as a wire cutter or flat head screwdriver. It also has a diamond dust sharpening steel mounted as an inset on the scabbard to make sure the blade always stays at its full potential. 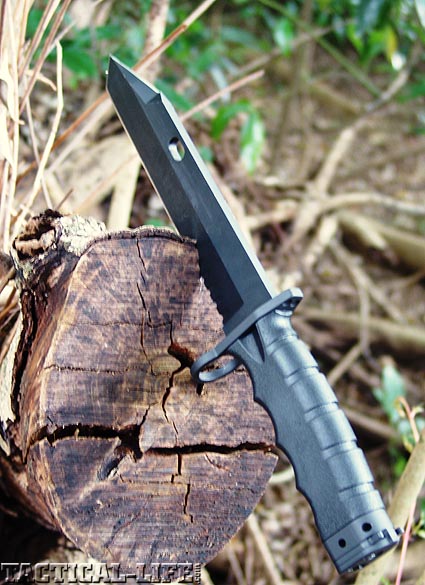 I found the 7.5-inch long, quarter-inch thick blade to be nicely balanced with the 5-inch long handle that makes a 12.5-inch overall length bayonet or knife. Its tanto point and edge-holding ability of N690 made short work of every task I performed with the blade. Mimicking the intended uses of the tactical knife, I started with chopping everything from wood (branches and limbs), water soaked rope to metal. After that I tried it as a bayonet in modern combat and successfully penetrated a ballistic vest to a depth that would be decisive in a hand-to-hand engagement. The chopping test resulted in easy severance of smaller branches and deep (over a ½-inch in green hardwood) cuts on limbs. A stabbing and twisting of the blade into a stout log did not result in any loss by breakage of the Tanto point. Cutting of the water soaked free-hanging, 1.5-inch diameter rope took only three strokes. I finally used the blade to pierce and rip aluminum siding; that was ridiculously easy but nice to know for people who ride in helicopters over water.

After use, I touched up the edge with the diamond-dusted sharpening pad attached to the multi-purpose sheath. As a result of the incredibly fine grain and uniformity of the steel due to the addition of Cobalt to the steel formulation, I was able to return the blade to its original sharpness with minimal time and effort. 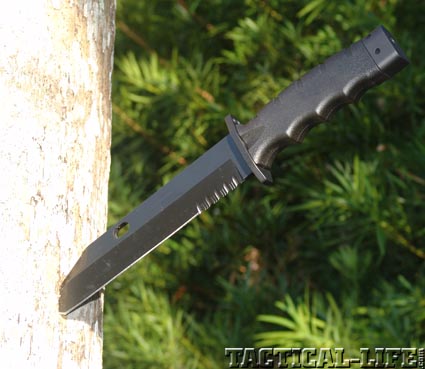 Overall, the CZ 805 Tactical Knife is an outstanding tool that grunts and operators will find useful. It will be very helpful for the many chores a warrior in the field faces, plus its use as a weapon. While using a bayonet is seldom trained on or included in battle fighting strategy, it is still in most army’s kits. Since the Somme, every soldier who has participated in a bayonet charge has thought that they were probably the last of the line to cross a field with cold steel affixed. In reality, that soldier may have yet to be born. Whoever that person turns out to be, they would only hope to use such a high-quality blade like the CZ 805 tactical knife to point the way.