0
SHARES
2
VIEWS
Share on FacebookShare on Twitter
Lyle Brunckhorst is one of those knife makers with talented hands and an artistic flair whose work spans art pieces to tactical knives. He is also the driving force behind the Northwest School of Knife Making and the Northwest Hammer In. He makes his own Damascus as well as working in stock removal. In short, he is a well-rounded maker with much experience. He also has an inventive mind, as evidenced by his patent-pending Xross Bar Lock. That lock and the Starfighter folder incorporating it are the focus of this article. 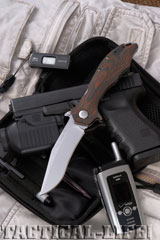 The Starfighter is an exotic-looking knife, looking a bit like something that might be standard field-issue—in the Klingon Star fleet. The 5.25-inch handle encloses a 4-inch blade. The 9/16-inch-thick handle consists of liners, scales and a back spacer. The screws that hold the scales and pocket clip to the frame are long, threaded into the spacer (not the liner), and all offset from each other. This superior construction method gets around the problems created by the short screws of scales and clips getting an insufficient “grip” on the few threads in a thin liner. The black/orange G10 scales are textured in a way I haven’t seen before. The longitudinal texture reminds me of sandblasted wood, with the grain raised.

Large But Light
In the hand, the knife feels pleasantly substantial. It’s neither light nor heavy, but you know it’s there, and you know by feel where it is in space. Since I am such a big proponent of the “simple is goodness” philosophy (in almost all things, especially knives), I expected not to like the elaborately shaped handle. It is swooped, angled, and scalloped, and seemingly has more curves than Jessica Simpson. But in the “you’re never too old to learn something” category, I was wrong. The Starfighter’s handle fell comfortably into my hand, with its arches and cambers mating to it like the cockpit of a Beemer melds to your body. More so, the knife stayed anchored to my hand as I manipulated it while using it. I haven’t felt this sensation too much before. As you use the knife and your hand naturally moves around, the Starfighter’s handle seems to “chase after” your hand and want to stay in contact with it. An unusual, but very pleasant sensation.

The recurved, 1/8-inch, flat-ground CPM 154CM blade was extremely sharp. I mean, I’m used to getting very sharp knives in here these days, ones that easily slice free-hanging paper. But the Starfighter was very sharp even by that standard. The fact that Lyle got this particular blade so sharp isn’t really surprising though, since he also operates a local sharpening business and sells sharpening equipment. Also, CPM 154CM isn’t the same as 154CM (a.k.a. ATS-34); while it’s the same composition, it’s made with the Crucible Particle Metallurgy (CPM) process. The Crucible Service Center describes the difference:

Conventional steelmaking begins by melting the steel in a large electric arc furnace. After refining, the molten metal is poured from the furnace into a ladle, and then teemed into ingot molds. Although the steel is very homogeneous in the molten state, as it slowly solidifies in the molds, the alloying elements segregate, resulting in a non-uniform microstructure with carbides precipitating to form a coarse, inter-granular network. In the CPM process the molten metal is poured through a small nozzle where high pressure gas bursts the liquid stream into a spray of tiny spherical droplets. This prevents the desegregation of the alloys and the resulting carbides which precipitate during solidification and are uniformily distributed troughout the steel matrix.

Thus, CPM steels have improved wearability, toughness and grindability. While ATS-34/154CM never really fulfilled its promise, the new generation of CPM steels seems to be, and CPM 154CM is one of the top steels in use today.

Xross Bar Lock
Despite these features, the Xross Bar Lock is what really makes the Starfighter unique. It’s based on an idea that Lyle had from Dan Perreault of “Thinking Blade,” an engineer and fellow knife maker, friend and partner of the Xross Bar Lock. At first, you could be forgiven for thinking that it’s the same thing as the Spyderco Compression lock. But it’s not. It does use a liner spring on the spine of the handle interfacing with the blade tang (in a more complex way) and with the opposite liner.

The Xross Bar Lock causes a male protrusion of the liner spring to pop into a female cavity in the blade tang and cross over into a slot in the opposite liner. The result is like having a chair wedged under a door handle and the floor (which is analogous to a liner lock) and a bolt across the door and the frame (which is analogous to the additional function that the Xross Bar Lock provides). Thus there are three points of resistance to the knife closing: on the rear bottom of the cavity with the rear bottom of the spring, at the top front of the spring and the top front of the cavity, and laterally across the locking spring. In fact, Lyle’s objective in designing this lock was to maximize the lock-up strength.

Lyle’s words on the subject: “Originally the lock used the slot in the lock receiver liner as the main lock and I introduced the tang slot as the secondary lock. This proved to work out as a hand-made knife but I could see it would be a problem in the event that someone might want to manufacture the knife. I now use the tang slot as the primary lock and this now gives us a bit of leeway in tolerances while allowing a very snug lockup and it is still redundant in nature, as any forces applied to the lock would be met by the second lock slot before any chance of permanent deformation could take place. [Also] the way that the lock works is not dependent on a radius of the tang and allows us to extend that tang as far as we like and this gives the knife far more lateral strength and also gives the lock more leverage. The lock has a similarity to a liner lock, in that part of the liner is sprung to the side, but works vastly different in design and I perceive it to be much safer and stronger. The lock has a 30-degree bend in the end to allow the lock to serve both the tang slot and the liner slot. The net result is that the lock bar firmly holds the rear end of the extended tang down in a locked position similar to a timber placed behind the castle gates and secured at both ends.”

In addition to the master-level craftsmanship and the unique lock, the Starfighter also incorporates 16 stainless ball bearings around each side of the pivot, for a total of 32, instead of the usual Teflon bushings. The blade can be tightened up for a more laterally stable knife and yet swing open with the flick of a finger. It also allows the blade to swing out far more smoothly than simple washer construction would. Making the knife so as to use a ball-bearing mechanism, and then assembling the knife with all those teensy-tiny ball bearings is something you don’t see too much on folders, for the obvious reasons, but what a difference it makes!

The Starfighter is one of Lyle’s “mid-tech” units, in that he uses some CNC-made parts (from his drawings) so as to keep costs and labor time reasonable, and construction repeatable. It uses a flipper-opening mechanism that couples with one of the knife’s distinctive downward swoops to form a full guard when opened. A ball bearing and detent setup keeps the knife securely closed.

Scary Sharp
I mentioned that the Starfighter comes extremely sharp. It was so sharp that it sliced little thin pieces of free-hanging newsprint! Because the edge was so sharp and smooth, I assumed that it wouldn’t cut fibrous materials like manila rope all that well without my putting a rougher (more micro-serrated), but just as sharp, edge on it. Well, I had a first here. The Starfighter was so sharp that its original edge went through ¾-inch manila rope in two passes—but not as draw cuts, as you’d expect, but with two push-cuts! It also sailed through cardboard almost as easily as it did paper. Here’s another first—it cut through 1-inch Kevlar banding with only moderate effort. I have had very few knives through here that could even cut through this material without a ridiculous amount of effort on my part—most don’t make it through at all. The Starfighter went through it like it was just another moderately difficult chore. In short, its cutting ability was extraordinary.

So, there are several reasons to like Lyle Brunckhorst’s Starfighter. It looks cool, it incorporates a unique locking mechanism, it is made of high-end materials and with high-end construction, and it cuts like few other knives.