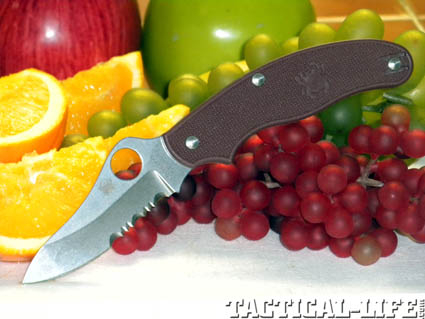 My father was the ultimate pocketknife user and he carried one everyday of his life. And he used his folder to cut nearly everything from twine to rope, apples to oranges, as well as for fish and game primary field care. Unfortunately, the old man’s only effort toward knife maintenance was to wipe the blade on his pants. Of course, the evidence of knife use quickly became manifest on the carbon steel blade.

Low Maintenance
All of this had a strong influence on me as a kid. If a pocketknife was going to be carried on my person, then it had to be low maintenance. For that reason alone, my own choice in pocket folder blade steel has always been stainless. After going through a number of different stainless blade products, however, I quickly learned that all are not created equal. Those blade steels with just enough of the right stuff to earn the title of stainless required far more maintenance than others that had a higher Chromium content. The one stainless that proved itself over repeated use, even with long periods of less than adequate maintenance, has been GIN-1 made by Hatachi.

The composition of GIN-1 is a rather straightforward mix of Carbon 0.080-0.090%, Chromium 17%, Molybdenum 0.30-0.50%, Manganese 0.45-0.75%, Phosphorous 0.020-0.030% and Silicon 0.35%. Looking at this formulation it’s obvious that the steel has enhanced corrosion-resistance. However, the minimal Carbon content and the absence of Vanadium, means that this has been done at the cost of hardness and wear resistance. Reportable, GIN-1 is reportedly stronger and more wear resistance than 425A, 420HC and 12C27 steels. Interestingly, an equivalent steel can be found in Carpenter BDI-1 steel. In fact, the composition of Carpenter BDI-1, with the exception of slightly less Chromium (15.75) and the addition of a small amount (0.10) of Vanadium, mirrors that of GIN-1. A further look into GIN-1 reveals that the steel has less Carbon than 440C or ATS-55, which means that those steels will hold a better edge. And even though GIN-1 also has less Molybdenum, Manganese, and Silicon than 440C and ATS-55, the greater Chromium content gives it a marked improvement over those steels in the corrosion/stain resistance arena.