0
SHARES
15
VIEWS
Share on FacebookShare on Twitter
Along with being ideal for a wide variety of kitchen cutlery, the green brick produces an excellent edge on hunter’s skinning knives. On the other hand, it is less than ideal for heavy-duty combat/survival blades.

Long experience in the cutlery business has taught me that there are a couple of major problems associated with writing about benchstones of any type. The first is it seems extremely hard to explain the basic back and forth sweeps needed to hone an edge in a manner every reader can understand. I tend to think this is because much of the technique involved with hand sharpening is about “feel” rather than method, and that is really hard to put into words.

The second problem is that benchstones are simply not very photogenic. It doesn’t matter if they are natural or synthetic; they all look like something you would use to build a brick house out of. A good case in point is the Japanese Naniwa Aotoshi 2000 grit stone almost everyone simply calls “the green brick of joy.” 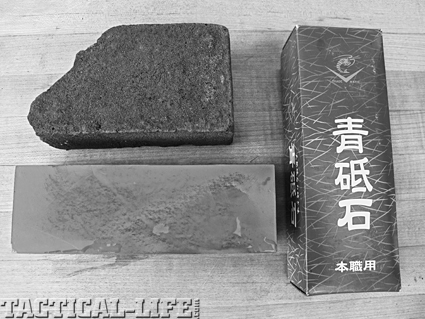 There is a good reason the Naniwa 2000 is referred to as the “Green Brick of Joy.” If you didn’t know it was a benchstone, it would be easy to mistake it for a building block.

The Aotoshi 2000 truly fits the description of looking like a brick. It weighs a massive 3.88 pounds and its 8.25 x 2.75 x 2.25-inch dimensions certainly fit the appearance of a building block. Naniwa’s green brick has become something of a cult following among hardcore foodie people because they feel it produces a much finer edge than its 2000 grit base would indicate. I’ve went on record a number of times that you can take the need for fine grits and smooth polished waterstone edges too far. As a rule, I seldom use anything over 4000 grit on most working knives, and I know 2000 will produce an edge suitable for the majority of materials anyone cuts.