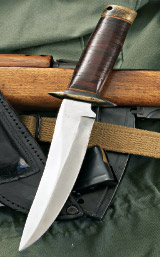 We have all heard the stories. My Dad has a German Luger from the war, or Great Granddad has a sword. They all sound mystical until it happens to you. While attending a nephew’s wedding, my Uncle Billy, Col. Billy Rutherford, U.S. Army Retired, mentioned having a knife from his days in Vietnam. It has been hanging in his garage since his retirement and I was welcome to it if I so desired. A month went by and we met for a Fourth of July gathering. As he handed me the knife, he told me the story that goes with it. The best way for me to give the history of the knife is to re-tell it in his words.

Words From Uncle Billy
Charlie and I first served together in the 1st Battalion, 17th Regiment, 7th Division in Korea during 1953-54. We were both 2nd Lieutenants. We both became company commanders and friends. I took a transfer to Japan to the 187th Regimental Combat Team (Airborne) in Beppu, Japan.