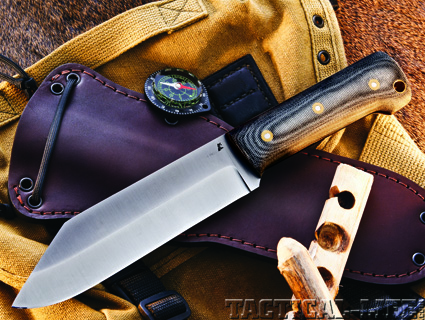 Bigger may not always be best, but this Toothpick can certainly power through chores that would take a smaller blade out of the running!

In the past few years the bushcrafting movement has taken a lot away from the idea that a wilderness working knife needs to be a big one, and many dedicated ‘crafters say that almost any chore a large blade does can be accomplished just as well with 4 inches of cutting edge. I do not agree that a smaller blade can do the same job as a larger one “just as well.” True, you can get most of the same work done in going smaller, but it often takes more time and effort to do that work.

A small knife does excel in lower weight and less space, which is important in many environments, but when it comes to getting down and dirty like processing wood for fire or camp fixtures, trail clearing, digging, tent peg hammering, and batoning, a 2.5-ounce puukko with an 0.080-inch thick 4-inch blade just can’t power through like a 1.5-pounder with a 0.25-thick 9-inch blade. Neither can entirely replace the other for all uses, both have their places, and each has its advantages. The trick is to decide what your own needs consist of, and what you’re willing to carry.

I always have at least one good folder on me for light duty, but when distant dirt beckons I like to have heavier steel along. Ideally, I want it on-body because I may get separated from my vehicle, pack, or partner, but I never get separated from myself. Since most of my off-asphalt expedition mileage now days is vehicular in the two-seat ATV, a big blade on the belt is no more practical than a long-barreled handgun. Both dig into the bucket seats, so I typically go with a short-barreled belt-gun and the heavy chopper rides in the breakdown bag in the cargo bed. There is, however, a very useful compromise from the guys at Blind Horse Knives that shows some promise.

Blind Horse Knives has been producing heavy-duty outdoor cutlery since 2005, and a solid rep for no-frills working steel. Most have been of the smaller Nessmuk, bushcrafter, and hunting/utility variety, this year they’ve responded to consumer demand in introducing a larger blade, the Lumberjack Toothpick.

The Toothpick is interesting from a performance standpoint in that it offers big-blade heft and utility in a blade that actually isn’t all that large. Markedly absent are high-polish steel surfaces, slippery handle slabs, screws that can work loose, delicate tips, thin edge grinds, add-on crossguards that can loosen, wood that can shrink, exotic steel that’s hard to sharpen and 90-degree angles creating built-in stress risers that can bust a blade clean off at the tang reduction under hard lateral forces. What’s left? A beefy 0.185-inch thick blade of dependable O1 steel with an integral fingerguard that’ll never come loose, a deeply-angled clip point you’d have to work hard at to break the tip on, canvas Micarta-like layered phenolic resin slabs glued and screwed with stainless screws and brass nuts ground off flush on both sides, and a sizable brass-lined lanyard hole at the rear. All this adds up to 17 ounces of pure unadulterated “Get ‘Er Done,” and if you’re looking for something fancy to show off, look somewhere else. 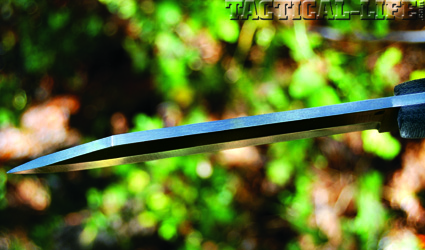 Built for the long haul, the idea behind O1 steel at 58 on the Rockwell scale was to set up a durable edge that you can re-sharpen in the field, under field conditions, with what you actually carry along in the field; not a nice 10-inch whetstone with a can of oil on a steady workbench and a glass of chardonnay standing nearby. Blade geometry features a saber-grind with a double bevel, which leaves thickness for strength along the spine and roughly halfway down the blade, and the clip at the tip isn’t sharpened or thinned for an edge, false or otherwise. The guard isn’t huge, but it’s adequate, and there’s no topguard to get in the way of your thumb when choking up for finer work on smaller cuts. This edge won’t do as well on tomatoes as a thinner blade, but it comes sharp enough to keep that bare patch on your arm bald. And, the brushed-satin steel finish is less than ideal for SOS-ing rescue choppers overhead, but I personally prefer a dull finish on a hard user. 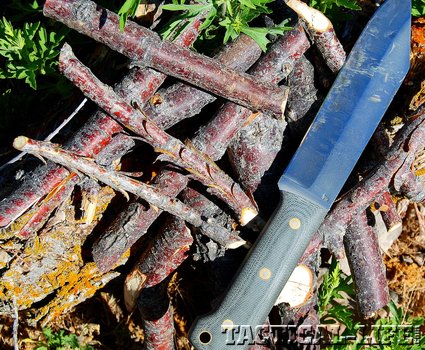 You can order the Toothpick with either a beadblasted or smooth-polished handle surface texture at the same price. The test sample had the beadblasted slabs that I prefer. The grip is just short of 1-inch thick, 5.13-inches long, slightly rounded in cross section, with an abbreviated “hook” at the pommel end. All metals, from the full thickness/full width tang to the cross screws, are ground perfectly flush with the slabs. It’s a very comfortable grip that works well under a load without being too abrasive in the hand.

The Lumberjack Toothpick doesn’t use a conventional belt sheath. Its makers were brainstorming a more practical way to carry it, didn’t want to mess with a drop-leg arrangement. They came up with the idea of resurrecting a method that died along with swords for everyday carry—the baldric. I’m not always sparking on all eight, as Grandpa used to say, and when I first took the Toothpick and its leather out of the box my initial thought was, “Hmmm, bit large for a neck knife!” 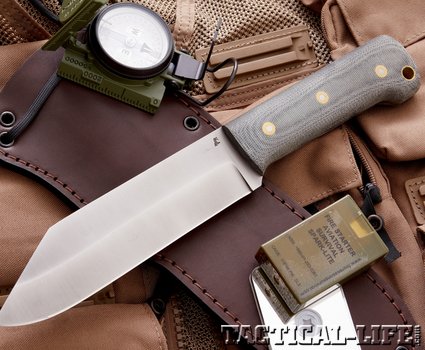 But, after discussing it with the maker and finding it was intended to be hung over one shoulder under an arm by its sliding-knot cord well out of the way while trucking along, the light bulb flashed on. The idea allows carry on either side, the leather’s not form fitted and the knife can be reversed in it easily, the six grommet eyeholes can lash to a pack with paracord, and Blind Horse is also offering an adapter separately for belt carry if you want to try it. With a tight fit inside the leather, this permits safe carry if you do an end-over, fall off your horse, or roll your ATV.

In my friendly nearby Oak Grove Testing Facility, the Toothpick spent a half hour or so reducing parts of a recently fallen tree to fire-starting material from smaller twigs up to a 2-inch limb. The edge was thin enough to shave some short feather sticks, and on a second visit I chopped a bit more, batoned with it, and used it as a draw-knife in shaving some bark kindling off the main trunk. During the chopping, no slippage occurred during impacts and there was no unnecessary abrasion like some rougher-textured and checkered handles can cause. That “hook” at the rear keeps the grip from traveling forward while chopping, and also gives an anchor point for moving back further on the handle for snap cuts without snapping the whole knife briskly out of your hand entirely. Between its thickness, the O1 steel, and the lack of stress risers anywhere, I wouldn’t expect any batoning fractures with this knife. The angle and thickness of the clip mated well for good two-hand control on draw-strokes; you can’t do that with a sharpened swedge. 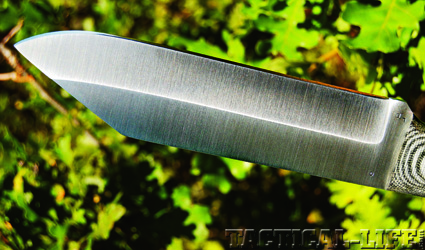 When I got around to measuring it, I was mildly surprised to find the Toothpick’s blade is only 7 inches long. It feels and performs bigger than it really is. For all-round camp, trail, expedition, or combat use, this one should see you through. Remember that O1 is not a stainless steel and you need to stay on top of it for corrosion, try the baldric idea, and if it doesn’t work with your fashion style you can find a custom sheather out there somewhere.