138
SHARES
254
VIEWS
Share on FacebookShare on Twitter
Modern materials have changed the balance of the tomahawk, but they prove to be useful today as they were in centuries past. Today’s Viking Warriors would be well armed with the United Cutlery M48 Hawk (top) and Smith & Wesson SW671 Tomahawk (bottom).

Use the term “battle axe” and you instantly evoke visions of Viking warriors standing proudly on the bows of their longboats. Throughout history the axe had been used in warfare with devastating results. Like most weapons of war, the axe was a common tool used by man in his daily struggle for survival. Its more mundane uses could include building a shelter, clearing land for crops, and at times, it could provide protection. The battle axe is nothing more than an improved version of the standard tool modified to improve its use in war.

Depending on the race and origin, the battle axe has been designed for use in both single-handed and two-handed models with either a single bit or in double-bitted designs. While this weapon may sound ancient, it has a history in the New World. Prior to the European settlers arriving in the Americas, the native Indians had stone axes, but once available, they traded for the metal versions brought by the settlers. These trade hatchets soon adopted the native Indian name, “tomahawk.” While given an Indian name, it was used equally by both Indians and settlers and has served in conflicts since the founding of the country. 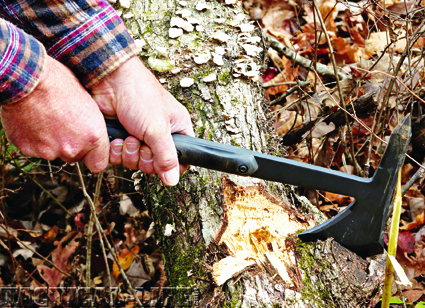 The handles are long enough for a two-handed grip and both handles held up well to heavy use. It would be nice if they had a method of indexing the location of the head during use.

The American battle axe, or tomahawk, has drawn a lot of attention recently. Most of us are familiar with the stories of the Vietnam Tomahawk designed by Peter LaGana. For such an ancient weapon, I am surprised that it would seem as if every cutlery company is offering a model. After receiving two examples of the modern tomahawk for review, I thought it was time to see if the tomahawk is a novelty or if it would have a place in the kit of the American civilian, law enforcement professional, or soldier of the 21st century.