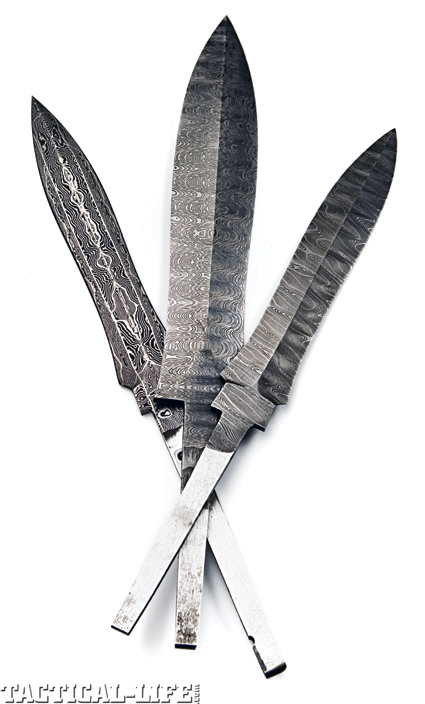 These three semi-finished blade blanks exhibit some of the Damascus patterns that are available from Two Finger. Custom patterns, made to the customer’s specifications, can also be ordered.

Beginning with the discovery of iron, edged metal weapons were used for personal protection and waging war. From the later Bronze Age until well into the 18th century, the sword and the knife were the choice of the gentry for personal defense, as well as the soldier for martial combat. Over time, new materials for these edged weapons were discovered and integrated into their fabrication. The creation of multi-layer welded, or “Damascus” steel was developed to provide enhanced resistance to contact damage, as well as improving overall ductility.

As steel quality and technology advanced, the production of Damascus steel cutlery gradually faded into obscurity. However, that certainly doesn’t mean the technique was lost. Even though William “Bill” Moran is often credited with the reintroduction of pattern-welded steel cutlery in the early 1970’s, I’ve seen Damascus blades that were made in Germany during the 19th and 20th centuries. Furthermore, Damascus steel was used in the firearms industry throughout the same periods. While the production of Damascus cutlery might not have been economical, obviously the technique wasn’t entirely lost.

Modern Damascus
Even though modern steels predominate in the cutlery industry, nevertheless, the use of pattern-welded blade steel or what we call Damascus has found its own niche. Many knifemakers enjoy making their own Damascus, while others are content to use pattern-welded steel made by others for their own stock-removal knife projects. However, sourcing Damascus steel can present many challenges—not the least of which is the assurance of product integrity. Since the fabrication of Damascus steel is extremely labor intensive, to keep costs competitive some knife supply firms obtain their Damascus from the Middle East or Pacific Rim sources. The problem here is that there’s no way to insure that well-experienced metalsmiths working with quality materials produced the steel. And there’s nothing more disheartening for a maker than to get well into a project and then encounter a hidden flaw in the blade steel.