0
SHARES
156
VIEWS
Share on FacebookShare on Twitter
Advertising for SOG’s Agency knife states that it is based on a knife originally “…created for special CIA operatives in the early days of the Vietnam War.” Before discussing the knife itself, I think that description merits some discussion. There have actually been very few knives ever ordered as Agency issue blades. In fact, in the 1980s, their blade inventory was made up of primarily sterile black F-S Commando knives and sterile black M3 Trench Knives inherited from the OSS. Note, however, that the description states that the original knife was created for “CIA Operatives.” That leaves open a lot of possibilities for individual orders. 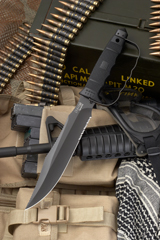 Sheep Dipped SF Troops
During the 1960s and the 1970s a large number of CIA paramilitary operatives were either ex-Special Forces or “Sheep Dipped” (troops loaned to “Christians in Action” for their special skills) members of Special Forces. A few SEALs were around as well. During that period there was a saying that you could always recognize a Special Forces soldier by five indicators: Rolex watch, star sapphire ring, sports car, divorce papers, and a Randall knife. Many of those Agency operatives who were performing paramilitary tasks would have brought their Randalls with them. Some may have ordered a small number of Randalls for a unit working together, either directly from Randall, who would fast-track military orders, or through the special supply center on Okinawa that acquired items for MACV/SOG and other clandestine units. I have been told that “Bo” Randall stated that he had never supplied knives to the CIA. That doesn’t mean he never supplied knives to CIA operatives, especially those who had been Special Forces members.

Reportedly, a similar knife was used by some operatives who were in Thailand to check out reports of MIAs. Rather than the early part of the Vietnam War, these operations took place towards the end and immediately after U.S. troops had pulled out of Vietnam. Paramilitary operators assigned to Northern Thailand ostensibly worked with the Thai Border Police and carried out other training tasks, but their mission was also to check out reports of MIAs in Laos and elsewhere. Some carried a similar knife, but I haven’t been able to obtain any additional information.

Of course, one test of the use of a similar knife during the Vietnam War by operatives might have been to see if one ever turned up in the Lost and Found basket in the Duc Hotel’s bar! A popular hangout with Agency personnel in Saigon, the Duc’s bar had a basket where the Walther PPKs or S&W Chief’s Specials carried by Agency officers and left in the bar were placed for retrieval. The occasional Browning Hi-Power from paramilitary operatives also turned up, but did the knife upon which the Agency is based ever show up in the Duc’s bar?

Similar to a Randall Model 1
When I first saw SOG’s Agency, I thought it bore a substantial resemblance to a Vietnam-era Randall Model 1. The Model 1 was probably the most popular Randall among Special Forces, though some liked the Model 2 Stiletto and some, the Model 14 Attack. I owned a Model 15 Airman at one point, too, which I had acquired from an SF Sgt, and I’m sure there were a few Model 18 Attack/Survival knives as well. Still, it would make sense that SF guys assigned to the Agency might order a Model 1 to use on their missions.

The Agency is quite a handsome knife with the sleek lines and excellent balance of the classic Randall Model 1, which was the original Randall fighting knife and the one that has served with U.S. troops in every war since December 7, 1941. I think one reason the Model 1 was always so popular is the fact that its tang allows use of a more comfortable handle than that on some other Randall models. That’s why Randall CDT (cut down tang) versions of the Model 14 and 15 have become very popular with some special operators.

Agency Profile
SOG’s knife is 12.7 inches overall and has a 7.5-inch blade. Steel is AUS 8. Both satin finish and black TiNi blades are available. The one I evaluated had the black TiNi. The blade has a drop point with a long false top edge that extends about 4.5 inches. The choil is similar to the type found on the Randall Model 1 and combines with the taper of the false edge at the top of the blade to give the ricasso a width of about .75 inch. This taper to the top of the blade gives it a slight leaf-like appearance. Weight is 9.6 ounces. The tang extends full length. The stacked, epoxied washer grip has red/white/black spacers at top and bottom. The black pommel cap is affixed with a round nut, which is inset. A hole for a lanyard or wrist thong is drilled near the top of the pommel cap. The crossguard is also black and is curved to the rear. It is about 2 inches wide and is definitely smaller than a typical Randall Model 1 crossguard. Note that I continue to make comparisons to the Randall Model 1, as I feel that was the knife that was the inspiration for the original knife upon which the Agency is based. The ricasso is marked on one side “SOG/Agency” and a serial number, and on the other side “Taiwan.”

The sheath is black leather with a retention strap and a sharpening stone in a pocket. I found the snap extremely stiff and very difficult to open and close, but it will likely wear in. There is a thong hole on the back tip of the sheath but it doesn’t go all the way through. I don’t know if this is by intent or if it was just not drilled all the way through. If this is the case on other sheaths, it will be necessary to drill/punch the hole through to use a leg thong.

Good Quality, Reasonable Price
I like SOG knives a lot, as I feel they give good quality for a reasonable price. Speaking of that, price for an Agency with satin finish is $200, and one with the TiNi Finish is $235. The Agency is a very handsome knife, which, like SOG’s other historical fighting knives—such as their version of the original MACV/SOG knife from which the company took its name—conjures up images of use in harm’s way. The long, black blade, curved crossguard, and leather washer handle blend very well aesthetically. I consider this one of the best looking fighting knives available at any price. Balance is excellent on the Agency and it is light and lively in the hand. Because of its looks and historical association, the Agency should appeal to collectors, but it is also a well-designed fighting knife that will appeal to users as well. The Agency is a quick knife in the hand; I consider that a very good thing in a combat knife.