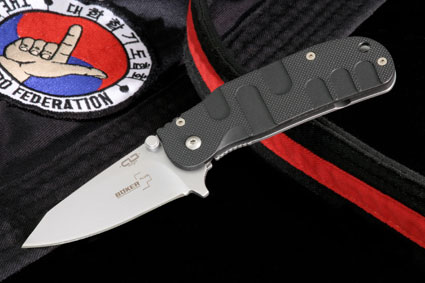 You know how some things that look odd at first soon become downright normal? If you are old enough to remember when the Ford Taurus was introduced, you’ll recall that it was considered radical. But by the time Ford retired the model a few years ago, it had come to seem downright fuddy-duddy. Today, we have the Honda Element (the “Polish Hummer,” as my chief calls it.) It sure looked strange a couple years ago when it was new, but today it’s fashionable. Well, it’s the same with knives. Knife designs that seem unusual or odd at first can, with time, come to seem ordinary—inspired, even. Think of the first Spyderco folder that you ever saw.

Chad Los Banos is a correctional officer in Hawaii and a well-rounded martial artist. Being part Filipino and Japanese, he says that there’s no way he could not be “into” knives. Chad seems like a normal enough fella, but he likes ’em short and wide. Now, that wouldn’t be any of my business normally, but now that he’s gone public with a whole product line of sawed-off, chubby knives with Boker, it is. His SUBCOM series—short, wide knives with 2-1/2-inch long and 1-1/2-inch wide handles, and 1-7/8-inch long blades—were written up by Jerry VanCook a few issues ago, and they seem to be very popular, judging by sales. His two newbies are related to the SUBCOM concept.