3
SHARES
36
VIEWS
Share on FacebookShare on Twitter
The SNAG Series of knives are not only ferocious cutting tools, they can also be used for trapping or joint manipulation techniques. STEVE WOODS PHOTO

The large array of blades currently available for combative applications is a bit overwhelming. Looking at the variety of blades, blade styles, price ranges and their intended uses is staggering, and trying to decide what is best for your real work and play can be daunting. Skill level and commitment to learning skills should be a primary factor in deciding what to procure. If all you want (or are capable of doing) is sticking, cutting or slashing in a very rudimentary fashion, then a fixed blade in a sheath is the knife for you. Merely pull, point, and go to work; that is all that is needed to use one. If you are interested in carrying a true multi-function tool that needs to be low key but also serve as a weapon and personal cutting tool, then a folder would probably serve you well. Of course, the folder is going to require some practice in order to deploy in conflict.

Other more skilled “knife-ists” want a tool that will cut, slice, jab, trap, and fend, making it a more functional implement for their practiced level of skill. I have seen a number of knives designed to work with/for particular skill sets introduced over the years. When I first saw the SNAG Series from Kurdo Knives I figured they were probably designed for some martial arts movie, but once I saw the You Tube videos that were created to describe their use, I thought “Ok. I got it…now they make more sense.”

Form & Function
The SNAG Knives are designed to repel attacks, pure and simple. Krudo Knives Paul Richter stated, “SNAG is a family of knives, lethal and non-lethal, all designed for self-defense but in an old-new way. The concept is based around controlling the aggressor using a reverse grip. The knives were designed to enhance one’s fighting style, whatever it may be, and give you an advantage because of its shape and the power delivered from its patented thumb support.” Strange in appearance to be sure, once you see them used, the curved profile makes more sense. 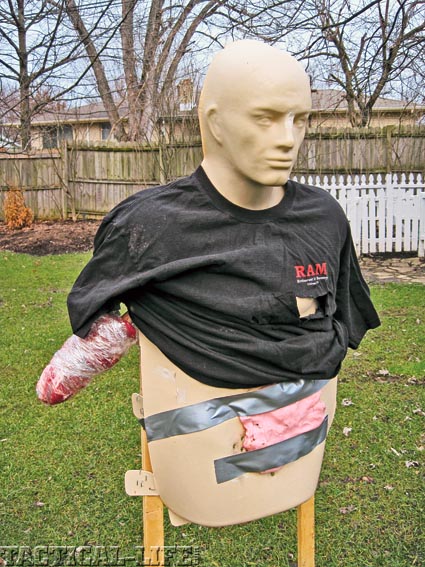 The SNAG blades were tested on the author’s “meat man”, a three-dimensional mannequin with both fat and muscle simulants attached.