Most of the “names” that have achieved a prominent position in this industry did so by selling products that maintained both quality and user confidence. SOG is one company that’s kept its head up, and when I saw the new Force fixed-blade at a recent trade show, my name went on the list for a test sample right then and there. Basically, the knife was a spear-point version of the U.S. Navy-issue SEALs 2000 combat knife. Hefty general-utility fixed-blades have always interested me more than folders and small hunters, so this one was right up my alley.

Knife Details
If your life includes serious working blades that don’t fit in a pocket, there’s a lot to like about the Force. My 11.5-inch sample weighs 10.5 ounces, with a blade length of just a hair under 6 inches. Aptly named, this one features no delicate contours, has no exotic (and sometimes-fragile) handle scales, uses no rivets that can loosen up and no soft rubber that can wear down—plus there’s zero chance of any sunlight that happens to glance off its black blade being visible from orbiting spacecraft. The Force is not a high-polish safe queen—it’s a knife that is made to be used. 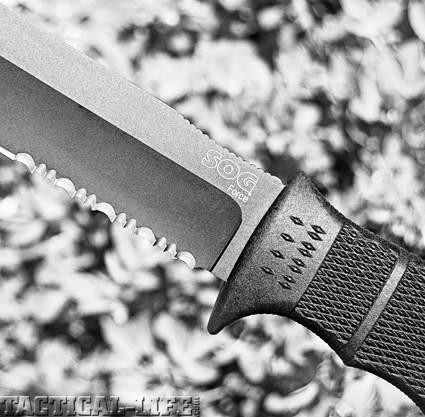 A single guard leaves more room for convenient choking up on the blade’s spine than the double prong design found on many combat knives.

The design is built around a hefty 0.236-inch thick blade of AUS8 stainless steel hardened to 57-58 Rc with a full-length tang inside a glass-reinforced black nylon handle. The steel is coated with a very non-reflective black TiNi finish. You get 2 inches of serrations at the rear of the blade for your money, plus a very comfortably contoured, aggressively checkered grip for your hand. That thick spine adds substantial strength to the hollow-ground blade, along with enough weight for light chopping chores if needed, and there are three other well-thought-out aspects that add appeal.

The point geometry ahead of the unsharpened swedge is sturdy and highly resistant to breaks or bends in hard use, a little over an inch of jimping just forward of the handle adds control for the thumb, and at the rear, the tang’s extended 3/8-inch and angled to function as a window glass breaker. The 0.88-inch thick handle carries four finger grooves, an integral lower guard up front, and a lanyard grommet at the back. All this is carried in a black nylon MOLLE sheath with hard plastic insert and a pouch for accessories on its face.

SOG’s website describes the Force as a “beast of a knife” and “virtually unbreakable.” While no blade ever crafted is truly unbreakable, “virtually” is a good descriptor on this one. There’d be no time wasted in choosing what to take along on a backcountry trip where I knew a rugged knife could be the key to getting back home again. There’s absolutely nothing I’d call refined or elegant about the Force, but there are times and places where rough and ready still carries the day, while pretty just doesn’t make it. Grinds are clean and consistent on the new SOG, the coating is uniform, mold seams are visible in the cast handle material if you look for them, but don’t rise above the surface to irritate skin, and the serrated “teeth” are uniform and sharp. This Taiwan-made tool is another indication of international outsourcing done right, and I’d expect the handle to break before it’d loosen up on the tang. 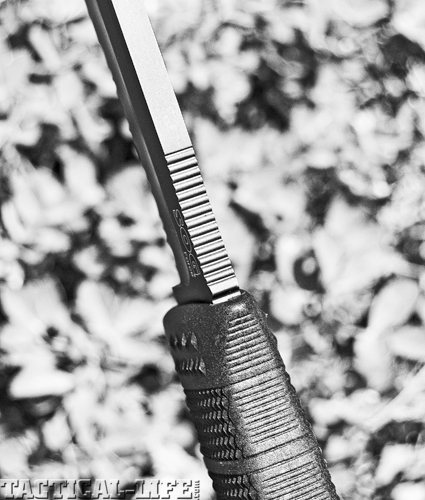 Spine’s dished jimping adds control with or without gloves.

Quality Blade
In hand, the Force has one of those intangibles that can only be described as “feels good.” The grip dimensions are very compatible with my medium-sized mitt, and in a world where I find many objects with finger grooves that don’t fit, these actually do. The balance point is about a quarter-inch behind the guard, and though a 6-inch blade of this thickness is neither ideal for finer bushcraft roles nor heavy enough to be a machete, it can handle chores overlapping into both areas to a degree, if it has to.

With a perfect 90-degree hold and positioned as the grooves suggest, there’s an inch of grip and pommel that extends below the bottom of my hand. SOG considers the Force to be an “outdoor” knife, but with the MOLLE sheath and glass-breaker pommel I can see it as a very effective choice for SWAT and first responder use, too. I’ve done my share of car windows over the years, and preferred either a longer baton or flashlight to keep my hands away from the glass as it shatters. An inch of space between skin and surface isn’t ideal even with safety glass, but if you know the technique and/or have time to get a glove on, and your tool is heavy enough, it’s more than doable. The Force’s pyramidal pommel neatly popped the driver’s side window on a dead Thunderbird at a local wrecking yard on a single try, with minimal effort and not a scratch on the unlined duty search glove used. Even bare-handed and in cold temperatures where friction is reduced, the checkering should be great for avoiding slippage if more energy or repeated strikes might be needed. 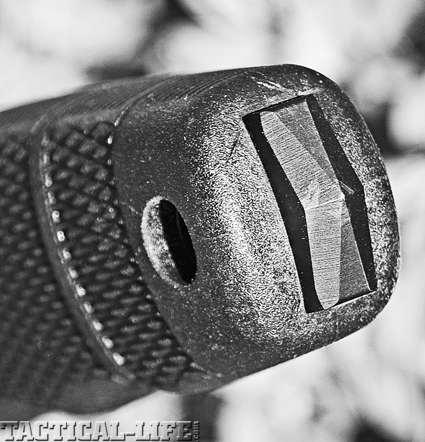 Serrations are not normally my thing, but they do have their uses, and nowhere more so than in crosscuts. For duty use, these will zip right through a seatbelt to free a trapped accident victim. Nobody who uses rope regularly will advise cutting line unless it’s absolutely necessary. But sometimes it is, and in cases where de-knotting isn’t an option—such as robbery victims or the occasional rappelling misadventure—serrations are very quick problem solvers. If you’re in uniform and the sight of a relatively sizable fixed blade on your belt or vest doesn’t generate citizen complaints and time off without pay, you could do a lot worse than this SOG. Even for more mundane uses around the house, it can be handy; I cut up an old 10-foot section of thin 4-inch black flexible plastic rain gutter drain pipe for the trashcan, and using just the straight section of cutting edge would have been a slow process without that serrated section that powered on through in seconds.

In a non-urban setting, the Force can do camp and trail chores without babying it or feeling guilty about scratching it up. The blade edge is no straight razor, but it’s plenty thin enough to feather sticks for fire-starting or food processing along the trail, and heavy enough for chopping smaller limbs up to an inch or so, depending on the type of tree and how much time you want to put into it. After pounding it a 1/2-inch deep into a 4-inch tree limb and prying it loose sideways a dozen or so times, then twist-drilling a shallow depression in seasoned dead hardwood, I’d have very few doubts about the ability of the reinforced point to stand up to some serious penetration applications. Emergency digging might blunt the tip, but I don’t see it breaking off unless major user errors were involved. The coating shows some scuffing after all this, but hasn’t worn through, and even if it does the all-weather protection of the stainless alloy would need some extensive corrosive exposure to show any kind of rust signs. The edge still removes hair from my arm, and the only disappointment I found is that it won’t relocate any of it to my head.

Force Multiplier
Like most of us who either read or write for knife magazines, I have more than a few blades at home, and I have my favorites among them. Some for specialized uses, some for design and craftsmanship, some for lightweight foot carry, some for motorized carry and some just for the hell of it. If I were still in uniform, the Force would be a top-tier choice to go to work with me. Besides the utility applications above, it also has enough reach to be used as a fighter, with the checkering and lower guard anchoring it against slippage on a forward impact and the glass-breaker doubling as a skull-crusher. Adding a short bit of 550 paracord or a cut-off length of leather bootlace as a wrist lanyard would add insurance in wet or slippery conditions, and learning to touch up the teeth during sharpening is highly recommended. (SOG says there’s a possibility of a toothless Force in the future, if you’re interested it might pay to make a call or send an email to help make up their minds.)

No longer a working man, I’ll be using the MOLLE sheath to attach mine to the nylon shotgun scabbard under the roof of my ATV’s roll cage for backwoods excursions. With a small multi-tool in the pouch, the rig will be an accessible backup to whatever’s on my gunbelt, and a quick grab if I roll and have to cut myself or a passenger out of the seatbelt webbing. A suggested list of $180 is in line with other knives of similar quality on the market. SOG has done it again on this one.