As a police officer, it can often be handy to have a knife that is easy to access and quick to open with one hand. Most of the time this is just going to be a convenience, but there are those rare circumstances when it might save your life. In January of 2009, a Sacramento County Sheriff’s deputy became involved in a weapons retention struggle and had to use his knife against the suspect, after which he was able to regain control of the situation. Two months later, in March of 2009, an off-duty Pittsburgh police officer working a security detail found himself in a very similar struggle with a suspect, and he too resorted to his work knife to keep the suspect from gaining control of his weapon. 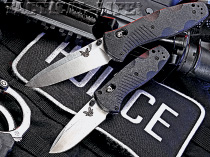 While this thankfully isn’t an everyday occurrence, it can and does happen. Let’s face it, in a life or death struggle we’ll use whatever means we have available to make sure we go home to our families. I know of cases of guys using their flashlights, their portable radios and even rocks from the side of the road when they needed to, but doesn’t it make more sense to have a more effective tool on your person already? Besides, the fact that a knife certainly is a tool means that you’ll likely use it for a myriad of other things in the course of the job as well, so it certainly isn’t taking up space needlessly.

Which brings us to a couple of new Benchmades, a company with a long history of making blades suited for police, military and medics. Take a look around any police squad room, or at a group of deployed soldiers, and there’s a good chance you’re going to see a lot of Benchmades clipped to pockets and MOLLE gear. Benchmade has a reputation of creating solid, well-designed knives that you can rely on time after time.

The 3310 Infidel OTF
The Out The Front (OTF) auto has an almost mythical allure to most folks. If they’ve had any exposure to them at all, it’s generally been only with cheap knock-off models. When I passed Benchmade’s new 3310 Infidel around the squad room at work, I heard nothing but praise and a steady “snick-snick” sound of the blade snapping in and out. Despite the gadget factor, there’s an awful lot of utility to an automatic as well. Especially one built as soundly as Benchmade’s Infidel series.