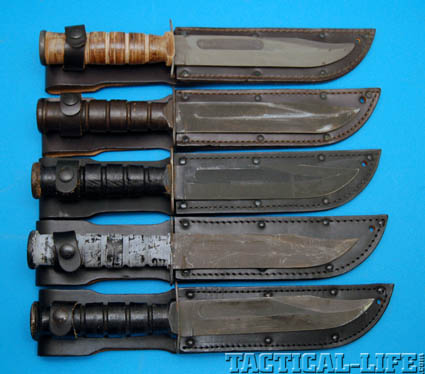 Over the past few years I have obtained quite a few items from the Defense Reutilization and Marketing Office (DRMO) sales. It is a large government auction that sells items no longer required at the current location. A large number of bases around the world auction off obsolete items, items no longer used and items that have expired storage dates on them. The items may be current issue but for some reason or another they are not required at their present location due to base closures, transfers in assignments, colors and patterns or a number of other reasons. The typical knives and bayonets I have obtained are obsolete models that are being surplused out. These have included the M7 knife bayonet along with the M8A1 bayonet scabbard that were sold in large bulk quantities for pennies on the dollar. The M1917 bayonets for the trench shotgun were also sold in large quantities. I have even obtained the current issue M9 bayonets in some sales. But by far my favorite purchase was the individual packed USMC 1219C2 Fighting/Utility knife currently termed the MIL-K12027, but better known by the generic G.I. title as the “k-bar.”

All of the knives I have obtained were vacuum-packed in sealed-foil containers with dates impressed into them. The knives in the packs can not be seen, so it is a gamble for what may reside inside, but to date I have not been disappointed. A few of the packs lost the vacuum seal from handling over the years for one reason or another. Upon opening the packs and removing the contents we discovered the items contained were of different manufacturers and dates. All were packed with accompanying sheaths. While I have not uncovered a WW-II example, I have found quite a few from the Vietnam War era. To date I have found examples made by Camillus, Utica, Ontario and MSI.

The Camillus examples were of both the early (pre-1974) and later (post-1974) markings complete with the correct Ox-Blood colored sheaths. They were obviously items that had been inspected, cleaned and repackaged for long term storage. The Utica example I found was of the dyed black variety dating it from the 1962 to 1964 time frame. The most common knife found was the Ontario stamped version. Ontario started producing this pattern for the government in 1980 and continues to this day. Finding this knife being surplused is interesting in that the government currently purchases them, but I guess that is how logistics works, it is less expensive in some cases to purchase new than to ship them halfway around the world where they are currently needed. Or so I am told.

The biggest surprise was uncovering the MSI marked knives in the batch. Manufacturing Specialties Inc or MSI was a Texas firm that obtained one contract for 5,498 knives in 1983. This is the only known contract for these knives as yet uncovered. The knives are rare to find and largely unknown by the military knife collecting public. To find one in near new wrapped condition was exciting. As I opened more of the non-sealed packages I discovered another and finally a third. Three in one purchase, that was more than I had found in 20 years of looking. While never a good looking knife the MSI is a functional piece. It is certainly a rough looking knife, with fit and finish problems, on some the stampings line up and some are misaligned. The fuller is not well finished on the majority I have examined, showing machine marks deeply imprinted in the bottom of the trough.

When the packages lost their seal the knife opened to the atmosphere and some moisture entered into the packs. The edges had a minor bit of rusting that was quickly wiped away. The black leather grips and the sheaths were covered in a light white powder of mildew. Although they were treated with the mildew resisting treatment (MRT) when produced, they fell prey to the white substance. It was just a matter of wiping them down with alcohol wipes and following up with a quick oily rag and they were like new again. The knives I obtained were from a large container owned by the USMC in Okinawa. Perhaps the tropical climate had something to do with the mildew issue, they have been in my climate-controlled house for several years and are perfect now.

The rest of my purchases were still tightly vacuum sealed. The urge to open them is strong, but I am still resisting to the best of my ability. Perhaps someday another collector will have the opportunity to open a sealed package containing a like new knife long after I am gone. 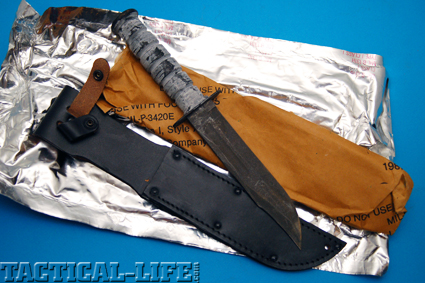 While many DRMO knives will exhibit wear from aging and neglect, for the most part they are unused and can be brought back to life with minimal maintenance.