Very early in my law enforcement career, I arrived on the scene of a single car accident in which the vehicle had left the road, entered a ditch and flipped over on its top. When I arrived, the smell of gasoline was quite strong and the female occupant was strapped in her seat belt, unable to release it and was in a frenzied state of panic trying to get out. Since gasoline and vehicle heat certainly increase the risk of fire, I agreed with her that her extraction was of primary importance. Unfortunately, I did not have anything with which to cut her out of the vehicle. A fire crew arrived shortly thereafter and pulled her out and one of the firefighters told me, “Kid, you should always carry a knife. They are just too handy not to!” I learned my lesson that evening and I have never left home without one since.

Today’s cop, firefighter or soldier has an endless supply of cutting tools to choose from, but the folks at Wilson Tactical have gone “right for the jugular” and created a trio of cutting tools that will fill the need for either an emergency tool or last ditch weapon. All are made to the same high standards their parent company, Wilson Combat, is legendary for. 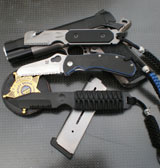 Wilson’s Cop Tool
The Wilson Combat Cop Tool was created to be more than just a knife. It can be used as a pry bar or scraping tool, perfect for such tasks as evidence collection, without worrying about breakage. The specially designed serrations will cut longer than a standard edge without needing to be sharpened. Trust me on this—cop knives do not get the attention they should, so having a cutting tool that will keep its edge for a long time is important. The seatbelt cutter (something I wish I would have had in the situation described above!) is a must for LE and EMT personnel, and does double-duty for cutting rope or cord. The handle on the Cop Tool comes in two different styles, depending on the model you purchase. The custom models that come straight from Wilson’s are cord wrapped and offer a positive grip, as the skin on the hand “seeks” the indents created by the wrapped cord. When using gloves, the cord works even better, grabbing on to glove material solidly. The model that I received for testing was a new collaboration between Boker Knives and Wilson’s, using the traditional Cop Tool design, but building it using a more economic bead-blasted blade made of high performance 440C stainless steel.

For their grip, Boker uses a textured G-10 for the handle, which eliminates any danger of slipping. Both the Wilson and Boker models have an exposed steel butt, which acts as a glass-breaker or pounding tool. The clip-on leather sheath supplied with my model can be carried discreetly in the waistband or fits well on any gear belt next to other kit. With an overall length of 6 inches, a blade length of 1-¾ inches and a weight of just 4.2 ounces, the Wilson Cop Tool makes the perfect everyday companion.

Tanto Cop Tool
What many people may not know is that the knives that come direct from Wilson Tactical are 100% handmade in their custom knife shop in Arkansas using American materials. All of their knives are made from D2 steel that sharpens cleanly and stays very sharp after months of hard use. All blades are heat-treated so they can maintain a precise level of hardness, but this type of construction takes time and will end up costing the end user more. While the Boker/Wilson collaboration is a very good knife, it was done in the interest of offering the customer a quality product at a reasonable price. However, if you want the best material available for your hard-earned dollar, buy a blade made from D2 steel.

While the original Cop Tool has proven itself with cops worldwide, a desire was expressed for a tool that would perform the same chores, but would also have a weapon-style blade. Enter the Tanto Cop Tool. Constructed with a full tang made from D2, the Tanto tip is tough enough to stand up to some prying chores. No, it is not as strong as the flat scraper design of the original, but with a Rockwell hardness of 59-60, it will take a great deal of abuse. In an effort to see just how tough the tip of the Tanto Cop Tool really is, I decided to try and break it. What the hell, it didn’t belong to me and if it broke, the readers should know. I drove the tip of the knife into a block of oak and once it was lodged in place, I struck the knife on its side to see if the tip would snap off. I thought it would break like a dropped dinner plate, but I was wrong. The knife came free of the block with the tip still intact. Sure, I could break the tip given the right test, but this was more than reasonable.

The handles on all Wilson Tactical Knives are shaped by hand and every handmade knife varies a little bit in shape, which makes each one of them unique. Every knife is thoroughly inspected and hardness tested prior to leaving the custom shop to ensure quality and a lifetime of dependable service, which is why the tip of my test Cop Tanto stood up so well. The Tanto Cop Tool comes with a molded Kydex sheath, which is designed to be carried on the inner belt, under your duty belt, to keep it out of the way until needed. For concealed carry applications, I found it very easy to carry the Tanto Cop Tool on my off side behind my spare pistol magazine. Because of its flat configuration, the knife was never in the way of any activity I performed, including drawing the spare magazine.

The grip is a black para-cord and is wrapped as described above so that the skin of the fingers or glove material grabs on to the natural indents created by the unique wrapping configuration. The thumb indentations on the side, the serrations located on the spine and the single finger groove on the bottom do nothing but add additional gripping surface in the event the knife ends up in your hand in a less than optimum position. Sometimes you just have to “improvise, adapt and overcome” and the more gripping points, the better. With a blade length of 3 inches, an overall length of 7-½ inches and a weight of 6 ounces, the Tanto Cop Tool is not as compact as the original, but it is still quite easy to carry while offering the versatility of a “fighting edge.”

Emergency Response Folder
As good as the two cop tools are, there are still a large number of cops, especially those working in plainclothes, who want something easier to carry and, to most, this means a folder clipped to a pocket. For this, Wilson Tactical offers the ERF (Emergency Response Folder). The fully serrated, rounded nose blade is made from AUS8 steel with black/blue G10 scales with stainless steel liners. The gripping surface is a textured sandpaper-like design that does a pretty good job of grabbing on to the hand in a wide range of environmental conditions. The blade is 3 inches in length with a thickness of 1/8 inch and an overall length of 7-¼ inches, which I think is just about perfect for daily carry. Like all Wilson knives, the ERF comes with a braided lanyard with a human skull “charm” attached. However, as neat as the lanyard is, I felt more comfortable removing it as I view them as something that will snag. Others will disagree and feel that they are a retention device—to each his own. In any event, they are easy to remove.

One feature of the EMF that I found to be more useful than originally thought was the elongated thumb deployment hole used for one-hand opening. The oblong design acts as a “feeder” for the thumb as it moves into place to push the blade open. Since I am used to tip-up carry and this knife is tip-down, I found this to be a real asset when pulling the knife from my pocket and shifting it in my hand to thumb open. The liner-lock proved to be quite robust, as I tested it by locking the knife open and then striking it smartly on the spine. Many knives will “vibrate unlocked” when doing this but such was not the case with the EMF. Like all of the Wilson knives tested, the EMF easily cut through standard materials such as leather, seat belt nylon strapping and even some tin that I had on hand. The knives from Wilson Combat are tough and certainly deserving of your attention!