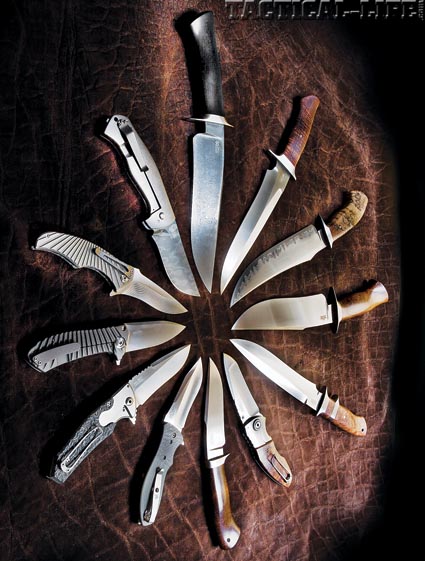 When you say Wilson Combat most folks start thinking guns, and with good reason. Wilson has an enviable reputation in the custom firearms field and has earned their spot there through hard work and masterful craftsmanship. But Wilson also deals with cutlery—and this isn’t just run-of-the-mill cutlery that Wilson has leant their name to. True to their reputation for top-quality products, Wilson has teamed up with a number of custom knife makers to do limited runs of select knives through the Wilson Tactical Custom Alliance. The Alliance allows them to bring customers limited numbers of tactical customs without the wait generally associated with ordering direct from a custom maker.

Wilson has already offered 11 previous designs and they’ve all sold out fast, so if you see something you like it pays to act quickly! The offerings have been a mix of fixed blades and folders, all from the hands of talented makers. Each run of knives is limited to ten serial numbered pieces, and when they’re gone, they’re gone.

Bladesmiths
Jason Knight started the series out and has done three of the eleven models offered so far. All three were fixed-blade designs: The Rogue Knight Bowie Fighter, the Dark Knight Damscus Bowie, and the Knight Wilderness Hunter. Jason hand-forges all of his blades from a variety of carbon steels and uses exotic woods for the handles. His sheaths are custom built by Lance Parrish and compliment the knives perfectly.

The first folder offered in the Custom Alliance was the Snap with IKBS from Kirby Lambert back in 2010. The Snap was a sturdy EDC piece like all of Kirby’s designs. Using Titanium liners, carbon fiber bolsters and G-10 scales it’s a solid but striking piece. The 154CM blade carries Kirby’s classic recurve design and is as practical for utility use as it is aesthetic.

Allen Elishewitz created the next folding design for the Custom Alliance in 2010 with his stunning Scout Elite. The Scout Elite blended premium Desert Ironwood handle scales with an ultramodern Titanium bolster lock, mated to a hand-ground 154CM blade complete with reinforced, armor-piercing tip. Allen followed this up with his futuristic Interceptor folder later that year. The Interceptor used a very unique 3D-machined black “wormhole” G-10 once again mated to a Titanium bolster lock and a flipper operated, 154CM blade.

Brian Tighe brought in 2011 with his Starfighter folder. The Starfighter used sculpted Titanium handles in Wilson’s signature starburst pattern and locked the blade in place with his Tighe button lock. The uniquely 3-D striated blade of the Starfighter was of RWL-34 powdered metal and operated via a flipper gliding open on his proprietary Sealed Thrust Bearing System (STBS). 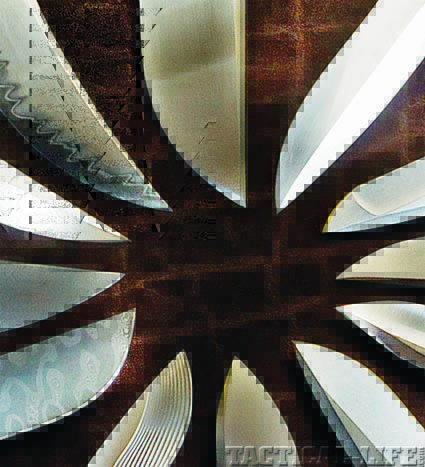 The next 2011 piece brought about a return to fixed blades with the Burt Foster Iron Wave. The Iron Wave was a massive bowie with an 8.38-inch blade. Burt is a Master Bladesmith and it’s easy to see why when you look at his hand-forged, laminated steel blade of 1095 carbon steel sandwiched between two layers of 420 stainless. Expertly fitted to a stabilized, spalted maple handle, the Iron Wave was as beautiful as it was functional. The Iron Wave was fitted with a premium leather sheath also done by Burt Foster, making the entire package the creation of a single talented maker.

The Icon Titanium frame lock flipper returned the Custom Alliance to folders, this time from tactical knife maker Todd Rexford. With the Icon we once again see the use of premium 154CM steel with a hand-rubbed finish. The Icon’s handle uses Todd’s version of the Wilson Starburst grip pattern and highlights it with blue anodized Titanium accent parts and pocket clip. Known for his extremely high precision fit and clean modern lines Todd Rexford was described as a “must have” collaboration for the Wilson Custom Alliance.

Les George produced the next installment in the Custom Alliance with his stainless Damascus bladed Blackout. The Blackout uses Les’s Hydra frame lock housed in a Titanium handle with carbon fiber inserts. The stainless Damascus used in the Blackout is custom made by Bladesmith Chad Nichols, and once again opens via a flipper, and features what’s described as a “ferocious reverse curve pattern.”

The Panthera Fighter by David Broadwell was the first 2012 offering in the Alliance. The Panthera’s big 8.25-inch blade is crafted from Swedish ELMAX stainless and is mated to an attractive and rugged stabilized Hawaiian Koa wood. The Panthera is fitted with another handmade Lance Parrish leather sheath and presents a formidable package for one of the lucky ten individuals who were able to grab this selection.

The most recent piece at the time of this writing was the Damasteel Starfighter from Brian Tighe. This Starfighter is much like the one offered last year in 2011 with the primary difference being a blade of Swedish powdered metal Damasteel. It keeps the starburst pattern Titanium handle, flipper opening system, and push-button lock. The Damasteel makes this one run a bit more than the previous model but they still sold out almost immediately. I got the release on the new model in the morning and by the time I sat down to write this in the evening all ten were gone!

If you missed out on these previous selections in the Wilson Tactical Custom Alliance, then keep an eye on their website for future additions. Wilson tries to add a new piece every few months and they already have three lined up for 2012 so far. The Custom Alliance pieces aren’t for the faint of heart, having run from $550 up to $1,595 so far, but if you manage to snag one then you know that you’ll end up with a very special, limited edition blade from some of the top knife makers in the world.