Shortly after cross-country flights became a reality in the early 20th century, pilots discovered it was possible for them to be stranded a long way from nowhere! Most were soon carrying basic survival kits that included a knife of some kind. Charles Lindbergh, for instance, included a classic Marble’s Ideal sheath knife in his flight bag when he made his historic flight across the Atlantic. During World War II the military issued a huge variety of machetes, sheath knives and folders to pilots and flight crews with no one “standard” model. In 1958, the military worked with Marble’s Arms Company and designed a survival blade, universally known as the “pilot survival knife,” for service-wide aircrew use.

Basic Functions
Any pilot/aircrew survival knife has two distinct functions. First, it may be required to cut the user free from the wreckage of a plane. This includes cutting and or breaking webbing, light sheet metal and Plexiglas. Second, once on the ground it needs to be able to serve as a basic wilderness survival tool—building fires and shelters, improvising other tools and preparing food. Military survival knives add yet another requirement in that the knife may possibly be needed as a weapon of last resort.

Marble’s design was basically a militarized version of the Ideal from its standard line. Trying to cover all bases, it included a “sawback” for cutting light sheet metal and survival use, a blade long enough for use as a weapon, a heavy steel butt for hammering and twin holes in the guard for converting the knife to a spear. This remained the standard issue survival knife in all branches of the service for the next 40-plus years.

Shortly after this article was assigned, a stern phone call from Ontario Knives came in. It seems the company has copyrighted the term “Aircrew Survival Egress Knife” and is unhappy if used for any other knife. It was indicated that Gerber had licensed the right to use the designation for its LMF II ASEK. No other companies can currently legally call their products “Aircrew Survival Egress Knives.” With this said, knives in this article will be called generic “pilot survival knives.”

Eickhorn
Several cutlery companies entered the competition for the new knife design but the details of many entrants were never released to the public. It sometimes seems like the military considers knife contracts more secret than the latest stealth bomber. Probably the first designs of which I became aware of were a pair of blades from the German company Eickhorn GmpH.

Eickhorn’s Aircrew Survival Escape Knife-1-Bowie seems to have escaping-from-the aircraft as its specialized function. The blade and handle combine a web-belt cutter, saw, rope-cutting serrations, awl, glass breaker and knife sharpener in one package. The down side is that this isn’t a knife that would be very practical for normal field chores or close combat once on the ground.

Gerber Knives
Gerber announced an entry not too far behind Eickhorn. Designated the LMF II ASEK Knife System, it features a partially serrated 4.84-inch blade of Swedish 12c27 stainless on a handle of insulated glass-filled nylon with a rubber covering. The thermoplastic sheath provides a number of attachment points and a built-in knife sharpener. A heavy metal cap serves both as a glass breaker and a hammering surface. The LMF II ASEK is offered in a choice of black finish or “foliage green.”

Along with aircrews, the new Gerber has been popular with ground troops all over Iraq and Afghanistan. While I may write about some pretty esoteric blades from time to time, I would never send friends or family to the field with something I wouldn’t be willing to carry myself. So when I tell you I personally sent a Gerber LMF II to Iraq with my sister’s nephew, trust me, it means something.

Ontario’s ASEK
All of which brings us to the one knife that can be called an “Aircrew Survival Egress Knife,” the Ontario ASEK. Currently, the Ontario version is the only model that has been tested and approved by PM Soldier and Natick Research Labs as meeting the Army’s criteria for a new pilot survival knife. Several thousand knives have been bought for official issue to Army aircrews in combat zones. You will note, I’m not saying this is a service-wide issue pilot survival knife, as I do not believe that is true at this time.

Ontario’s offers a 5-inch blade of plain 1095 carbon steel with a zinc phosphate finish for rust protection. The blade is hardened to a relatively soft 50-54 Rc, which should make it both tough and easy to resharpen in the field. In many ways the blade is very similar to the original pilot survival knife, but with a flat grind and a partially serrated edge.

It offers an insulated rubber grip and handguard and the heavy steel butt cap provides a glass-breaking point as well as a flat hammering surface. In a separate slot in the sheath behind the main knife is a secondary blade/tool that offers a web-cutting hook, screw driver point, and edge sharpener. Choices are a green nylon sheath with black handle or a digital camo sheath with a green handle.

Picking a Favorite
All models are commercially available. My recommendation tends to be colored by my military service as an 11-B2P Infantryman. The Eickhorn and the Ontario appear to be excellent designs for aircrew use, but I would probably still go with the Gerber for infantry service. Most modern infantry are sometime “airmobile” so they may need an “egress” knife as much as someone in an aircrew.

Will any of these designs become the next military “pilot survival knife” or will something entirely different enter the race? Only time will tell.

About The Author:
Steven Dick enlisted in the U.S. Army in ’67 as an Airborne Infantryman and served his country in Vietnam in May of 1968. After serving he earned a degree in forestry and in 1994 he assumed the position of editor in chief of Tactical Knives magazine. 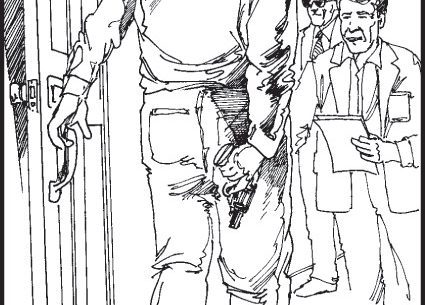