My first experiences with laser sights on firearms were with Crimson Trace Lasergrips. I obtained an early version of the grip panels for my 1991A1 Colt Commander, which I carried as my duty weapon at the Union County Sheriff’s Office in Marysville, Ohio.

The grips worked very well. In two encounters where suspects were held at gunpoint, I found the biggest advantage was the ability to see the suspect clearly with the red dot placed on the center mass target zone. This allowed me to monitor a suspect’s hands and even facial expressions, something I couldn’t do when covering a suspect with iron sights, keeping a constant focus on the front sight. The difference was remarkable and I was convinced that Lasergrips were a must on any officer’s duty or off-duty sidearm.

That bright red dot showed me where my shots would strike if I needed to fire and the suspects knew it too. The Lasergrips allowed me the confidence to look suspects over and monitor them carefully while giving them the appropriate commands. I have had Crimson Trace Grips mounted on duty pistols, off-duty pistols, training pistols and recreational pistols. With so many pairs of Lasergrips, I had the opportunity to use them in an unusual off-duty encounter.

Laser’s Targets
One night while driving home on Interstate 70 in Columbus, I was startled by what appeared to be a red laser flash across my rearview mirror and through my car. After my initial “what the hell,” I looked in the mirror for the laser again and noticed that it was emanating from a ragged out old van. The laser was being pointed at other cars on the freeway as they were driving. Fearing that this laser had a gun attached to it—like the Crimson Trace equipped Smith & Wesson 638 Bodyguard revolver in my briefcase—I knew the vehicle had to be reported and intended to follow it until marked local police vehicles were able to stop it.

I called in on my then, new-fangled cell phone, and started explaining the situation to the 911 operator. Since the perpetrator had no front tag, a violation of Ohio state law, go figure, I started slowing down to let him go around me to get a license number. Well, the suspect was having none of that, and began to slow down so I could not get behind him. I slowed down more, then he slowed down more and suddenly we were stopped in the middle of I-70 during late, rush-hour traffic, with my car to the left of his.

He got out of the van with a crazed look on his face and I grabbed the Model 638 and got out to meet him. As he rounded the back of my car—we were lucky we didn’t get run over, especially me since my tunnel vision was focused on him—he reached under his buttoned up shirt. It was at that point that I pointed the Bodyguard, (great name for a gun), at him, lit him up with the laser and yelled, “STOP!”

Cop’s Laser Gained Respect
He saw the laser dot centered on his white shirt. His eyes got big and pulled out an empty hand from under his shirt! He asked, “What, are you going to shoot me?” I said something like,“If I have to.”

Seeing him and the dot so clearly in the same focal plane, I never noticed the iron sights. He got back into the van and took off, heading east on the freeway. I got back in my car and pursued, using that cell phone to keep in touch with the local constabularies. He exited the interstate and headed out into the country. I got in touch with that county’s sheriff’s office, vectoring in two cruisers to our location and they got him stopped.

The deputies found a laser pointer in his car and no gun. They took a report, but their misguided county prosecutor didn’t charge him with anything, not even disorderly conduct. What’s most shocking is that this incident occurred when there was talk of banning civilian sales of laser pointers or laser sights. Here was a genuine misuse of laser technology, this clown could have caused a crash on the freeway by scaring citizens, and he was almost shot by me in our confrontation since I feared he had a weapon. His actions also caused the diversion police resources to deal with him.

Cops Win, This Time
The moral of the story is “don’t bring a laser pointer to a laser-sighted gunfight!” The Crimson Trace Lasergrips got his attention and stopped this suspect dead in his tracks. I imagine he was more than a little surprised to be confronted by someone in a car with a laser-sighted weapon system and not just a pointer. The Lasergrips allowed me to clearly see what was in the suspect’s hands, thankfully nothing, while knowing I would hit him dead center mass. It was a beautiful thing. 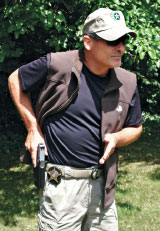 My first experiences with laser sights on firearms were with Crimson Trace Lasergrips. I…