0
SHARES
2
VIEWS
Share on FacebookShare on Twitter
Despite weighing in at just 13.1 ounces and measuring only 5.5 inches long, the HAMR Riflescope contains all the bells and whistles you’d expect from a Leupold optic. The author found the HAMR to be combat-ready and extremely scratch-resistant.

Despite being the largest manufacturer of riflescopes in the United States, there was something missing from the Leupold catalog. They had long-range optics capable of 1,000-plus-yard accuracy and mini red-dot sights for up-close-and-personal shooting. However, what they did not have was a lot of mid-range battle rifle optics. Of course, this is now a thing of the past.

I had my first experience with the High-Accuracy, Multi-Range Riflescope (HAMR) recently out in Oregon when Leupold hosted an event for industry writers. We ran rifles equipped with HAMR optics at medium and close ranges. 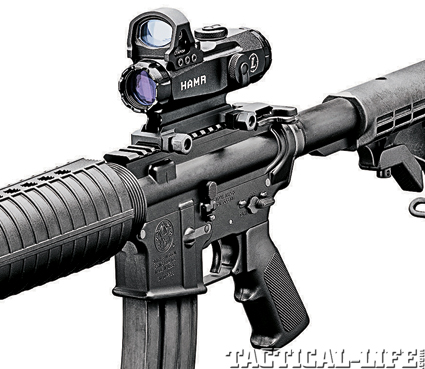 Leupold has an optional DeltaPoint red dot sight, available in 3.5 MOA or 7.5 MOA, that is mountable on top of the HAMR and increases mid-range instant target acquisition. Photo courtesy Leupold

The concept behind the HAMR is simple and accepted. You take a fixed 4X optic with a bullet-drop compensator (BDC) reticle. Leupold did that with its new CM-R2 reticle. This BDC reticle is designed to mate with the U.S. Army’s M855 5.56x45mm ammunition. You must also mount the glass in a battle-tough housing. They did that as well.