In the last two decades, the art and science of tactical scopes has evolved in what can only be described as quantum leaps. Where before, what were essentially hunting or target shooting scopes that had been adapted, and in some cases, virtually rigged to serve as tactical scopes, we now see the opposite. Today, carefully and well-conceived tactical scopes are abound with more major scope manufacturers entering the burgeoning marketplace. 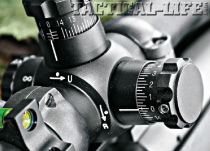 While attending a show in the late ‘80s, I got word that longtime American scope maker Leupold was in the process of totally reorganizing their operation with the stated goal of becoming the dominant scope maker. It was said that even if they had to raise their prices, they were going to produce a wide spectrum of scopes, suitable for all types of shooting that would quickly become the choice of serious shooters worldwide.

Leupold fulfilled their goals and it wasn’t very long before an ever-expanding new line of scopes began to appear. Being a serious big game hunter as well as a tactical rifle aficionado, I began to note with pleasure that their new scopes not only exhibited superb quality of materials and workmanship, but also displayed something that had been previously missing from virtually all telescopes, an understanding of human engineering.