A mil-spec hardcoat anodize in Flat Dark Earth, along with a new turrent system distinguish the PSR scope from the standard Mark 4 line.

The current US SOCOM Precision Sniper Rifle solicitation has detailed not only what the snipers want to see in the next rifle, but the riflescope as well. Leupold’s latest tactical scope has been specifically designed with these requirements in mind. A new tactical division was created at Leupold in March of ’09 and they are already hard at work.

Scope Details
I received two scopes for testing, a 6.5-20 and an 8.5-25. Both scopes feature mil-type reticles in the front focal plane, thereby remaining properly calibrated at all magnification settings. The 6.5-20 was equipped with the Horus Vision H37 reticle and the 8.5-25 had the Leupold Tactical Milling Reticle (TMR). The scope is built on a 34mm main tube and a 50mm objective lens. The objective bell is threaded for accessories, such as an anti-reflection device, laser filter or lens cap. The entire scope is anodized in a Flat Dark Earth Type III hardcoat finish.

A brand new and unique turret system is calibrated in 0.1 MRad click adjustments, 10 Mils per revolution, 20 Mils total adjustment. Both of the turrets have easy to read divisions, each full- and half-mil is marked with a number value. Adjustment is the US standard counter-clockwise for up and right. The windage turret adds L and R after the value, confirming the direction you are moving the impact point. Clicks are crisp and positive, and the calibration of both scopes was within 0.05 mil over 20 mils of travel. The knobs are large and grooved for a positive grip. Each is locked on the 0 point by three 3/32-inch hex head set screws. The windage knob is capped for protection, which works well since most snipers will hold their wind call using the reticle rather that dialing on a correction.

The milliradian is the standard reticle pattern for tactical scopes. When the turret matches, it’s simpler to make adjustments. If you spot the impact 0.7 mil low, just dial 7 clicks up and you are dead on. The matching mil/mil setup has been missing from the Leupold line, excepting the somewhat odd 0.05 cm “Metric” adjustment in the 4.5-14. Now that this scope has had the engineering done for the turrets, the Mark 4 line will soon be upgradeable in the Custom Shop to get real 0.1 mil adjustments and new product identifications will be added for off the shelf units.

SOCOM Specs
The elevation knob has a unique locking feature, called for in the SOCOM specifications. Rather than a cap, the knob has a checkered push button on top. To dial a correction you need to push down on the button while you turn the dial. I found this very simple to do from my shooting position by placing my index finger on the button and turning the knob with my middle finger and thumb. Releasing the button instantly locks the knob on the selected setting; preventing possible zero changes from the knob being turned while in transit. As one revolution is 10 mils, a pin pops up from the top of the knob when you are on the second revolution. This provides positive visible and tactile indication of the sight setting. The knob has a bottom stop keyed to the threaded collar that activates the turn indicator. There are a total of 30 mils of adjustment to provide for zeroing, leaving 20 mils usable from stop-to-stop.

A knob on the left side of the turret housing is used for parallax correction. The eyepiece has the familiar lock ring and fine thread ocular focus adjustment. There is about a 1.2-inch shift in the optimum eye relief when zoomed from minimum to maximum power, fairly typical for a variable power scope. The power ring is smooth in operation and easy to operate from a shooting position.

Reticles
As stated previously, the 6.5-20 had the Horus Vision H37 reticle installed. The Horus Vision system is designed to let the user engage targets without the need of dialing corrections; the reticle is a mil based targeting grid with small hash marks every 0.2 mil and a larger numbered mark at each full mil. Below the center of the main reticle, a 10 mil wide line with the same hash marks and numbers make up the elevation and windage grid. By using known dope or a ballistic computer to compute drop and windage, one simply holds at the desired point on the grid.

Leupold provided a 12-40x60mm Tactical Spotting scope with a Horus reticle as well. By holding the spotter at the same point, an instant correction can be applied by locating the impact on the grid, then simply changing the hold to that point. The good point to this system is that it can be both fast and precise, no need to dial anything at all, just hold at the required grid reference. The downside is a very ‘busy’ appearance and a slightly thicker than optimal reticle at higher magnification levels. One also loses elevation lines as you dial up the power, the field of view grows smaller. The H37 reticle deals with this issue by placing the center of the reticle in the top 1/3 of the field of view. This provides 13 mils below the zero point at 20x. If more than 13 mil of elevation is required, you need to reduce the magnification level, dial up a value and add it to the grid numbers or dial the actual value and use a normal center reticle hold.

The TMR reticle is a conventional duplex with the addition of hash marks at the half- and full-mil points. Each long line is 1 mil, the short marks are .5 mil. At the outside ends of the crosshair near the duplex there are marks at .2 mil intervals. I like this reticle very much, I’ve had most all of my personal Leupold tactical scopes converted to the TMR by the Custom Shop.

Range Impressions
I ran an optical comparison between these and the long-range tactical shooters top end choice, the Schmidt & Bender 5-25 PMII. Setting all of the scopes to 20x, I tested for resolution on a Zeiss 1956 test chart. At 100 yards, the S&B resolved to 2-5, the Leupolds made 2-4, nearly identical performance. As the S&B has a 56mm objective, I’d rate them as equal for practical purposes. The field of the S&B has slightly better resolution at the edges, still resolving the 2-5 block, where as the Leupold’s dropped down to the 2-3 block. Contrast in all the scopes is excellent; none had any problem picking out a dark target in shadows at 800 meters. The S&B had a slight edge in twilight performance, extending the useful view for 15 minutes beyond the Leupolds, mostly because of the larger objective lens. Neither of the scopes had the reticle illumination feature. The illumination option, when equipped, provides eight increasing intensity settings of red illumination on the crosshair. The Leupold scopes are considerably smaller and lighter than the S&B, almost a pound less in weight and 2.5 inches shorter.

An external lens coating called Diamond Coat 2 provides a scratch resistant layer as well as increased light transmission. Instead of the standard Nitrogen fill for waterproofing, these scopes are filled with an Argon/Krypton gas blend. In addition to reducing thermal shock effects, Ar/Kr molecules are larger than Nitrogen molecules, increasing the effectiveness of the seals.

Final Notes
This marks a major improvement in the Leupold line of tactical rifle scopes. While the Mark 4 line has been quite successful with a large market share since its inception, many other scope makers have been making inroads. These scopes were purpose designed for the military and I believe Leupold has done an outstanding job of meeting the goals set for them. The tactical division is working hard at getting info directly from the operators as to what they want in a rifle scope. The engineers are still working on fine-tuning the configuration of these scopes, so the details may still change. These will also end up with a regular commercial product ID, so look for them to be formally announced around early 2010. With products like these, the future of the tactical scope line at Leupold looks bright! Find more information at leupold.com or call 800-538-7653. 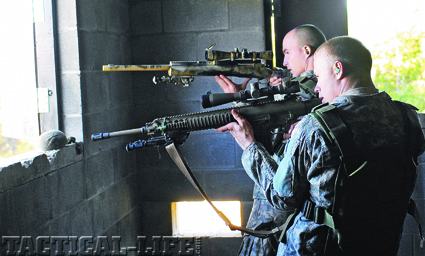 A mil-spec hardcoat anodize in Flat Dark Earth, along with a new turrent system…