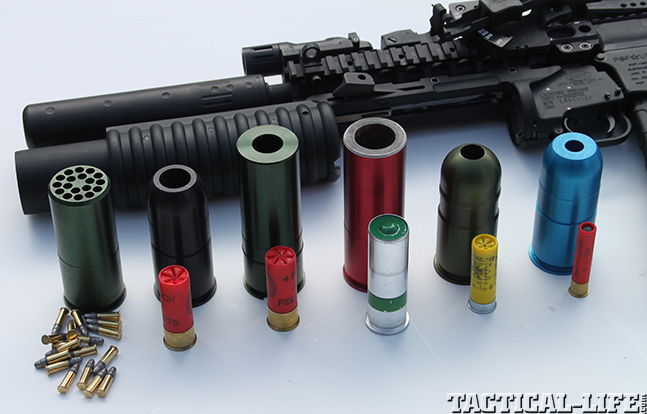 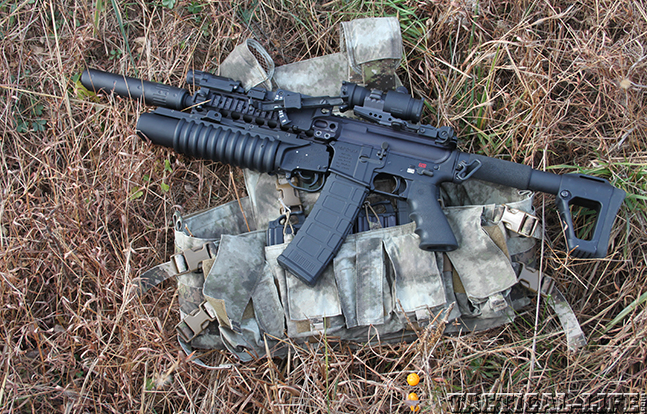 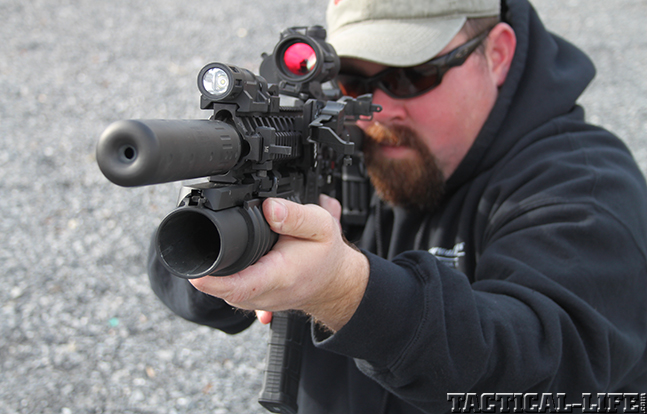 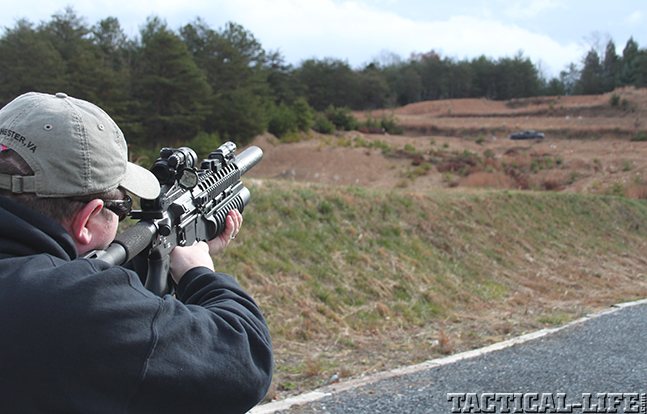 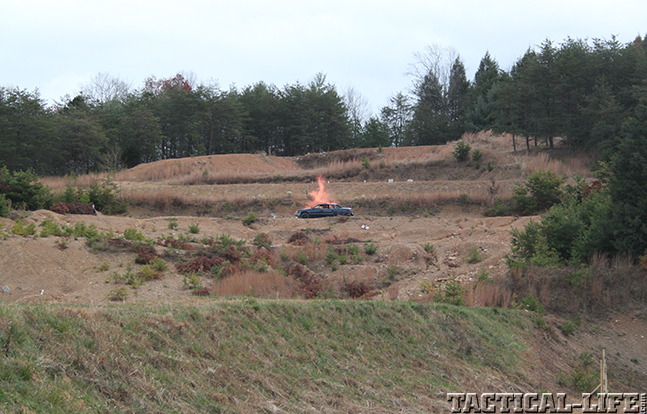 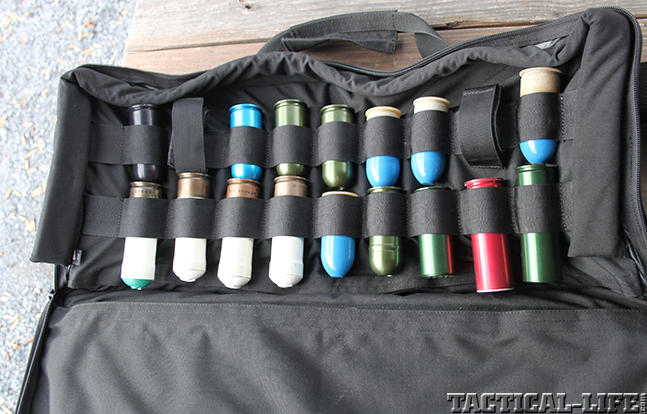 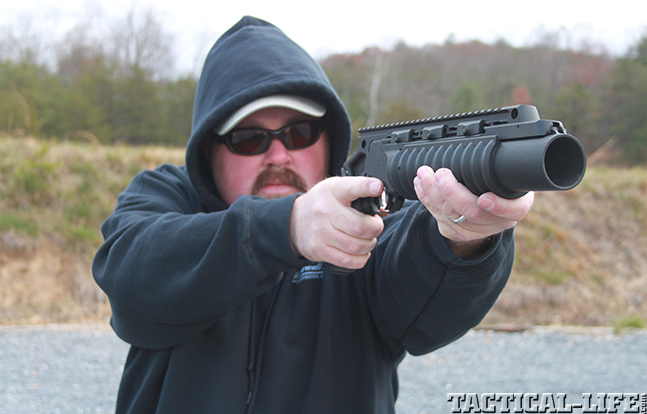 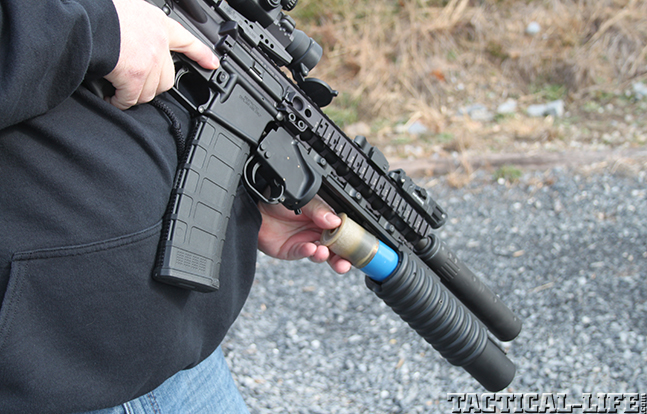 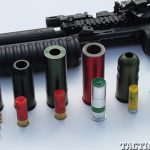 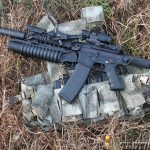 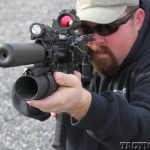 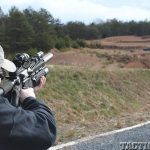 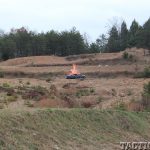 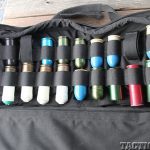 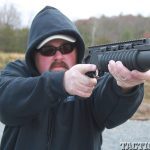 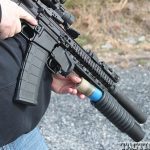 The Lewis Machine & Tool (LMT) 9-inch M203 2003 rail-mounted grenade launcher is a great example of a versatile weapon system. A friend of mine succumbed to the urge and went through the NFA process to acquire one. The LMT 40mm M203 is covered under the NFA Destructive Device auspices. Many do not realize that a 40mm launcher is possible for a mere “civilian.” While the 40mm launcher is most associated with high-explosive (HE) rounds commonly used in the military, these are not the most practical for the civilian. If HE rounds are located, a hard task in itself, civilians are required to obtain a $200 tax stamp for each HE round, then pay the asking price for the round and then comply with storage regulations.

Do not despair, however, as there are a surprising number of options available in terms of 40mm rounds and adapters on the market for the LMT M203 2003 launcher. For example, adapters to fire shotgun shells, multiple .22 LR rounds in one trigger pull and flares exist. Today’s 40mm ammunition is diverse, with training, illumination, IR illumination, CS gas, flare, smoke, buckshot and less-lethal loads available.

The 40mm’s flexibility and lethality are the main reasons why it has been around since 1961 in the form of the M79, which was later replaced by the M203 in 1969. The M79 was a standalone weapon resembling a break-open, single-shot shotgun. The M203 was designed as an under-barrel device attached to a rifle. Since a grenade is not always the best choice for a given engagement, not to mention the weight associated with each 40mm round making carrying enough problematic when in the field by an individual, an under-barrel system has the advantage of allowing its user to also carry a rifle and easily switch between the two, thus staying relevant to the unit, no matter the situation. The original M203 is intended for permanent attachment to the rifle.

The LMT M203 2003 rail-mounted grenade launcher’s close lineage to the M203 is evident aesthetically. The updated LMT M203 40mm variant is more adaptable to use with a variety of rifles due to its improved mounting method. A standalone pistol grip rail is also an option. LMT offers both 9- and 12-inch tube lengths. The LMT launcher is designed for use with the LMT Monolithic Rail platforms and other Mil-Std-1913/STANAG rail systems. The LMT M203 variant is much easier to install and remove in the field than the original M203. It features a 1-in-48-inch twist rate. Here lies a major difference between the 40mm launcher and the 37mm variants that exist in the civilian world. The 40mm is rifled, whereas the 37mm launchers are smoothbores and do not fall under NFA regulations due to being considered more of a pyrotechnic device. The LMT M203 weighs approximately 3 pounds and measures 12.5 inches long.

“The 40mm weapon system was developed as a cross between a rifle grenade and a mortar with intent to increase a platoon’s firepower.”

A brief word on 40mm ammunition is in order. The LMT M203, as with most handheld grenade launchers, uses low-velocity 40x46mm rounds. A higher-velocity 40x53mm round is typical in mounted and crew-served weapons. The two 40mm cartridges are not interchangeable. The rounds feature a High-Low Propulsion System to help manage recoil forces. The cartridge casing contains a cup-shaped “high-pressure chamber” in the bottom. On firing, the propellant builds up pressure until it breaks through the copper cover, venting out to the “low-pressure chamber” and sending the 40mm down the tube at approximately 250 fps. The listed effective range of the M203 is 160 yards, with 450 yards being the maximum.

The 40mm weapon system was developed as a cross between a rifle grenade and a mortar with intent to increase a platoon’s firepower. The M203 launcher is intended to be used as close fire support against point and area targets. Its primary purpose is to engage enemies in spaces that cannot be reached by direct fire. There are at least eight different rounds I discovered mention of for the M203 in the military arsenal: M406 HE rounds; M433 HE dual-purpose rounds; M585 white star clusters; M651 tactical CS grenades; M781 practice rounds; star parachutes (white, green and red); ground markers (red, green and yellow); and M576 buckshot (“beehive”). Other rounds exist for the 40mm, both in the less-lethal and military realms.

The LMT M203 2003 launcher can be labeled as a third-generation 40mm launcher. For reference, the M79 is first generation, the M203 is second generation, and third-generation models are standalone launchers that are multifunctional—they can be either attached to a base rifle platform or function on their own. Third-generation systems frequently feature the increased use of aluminum, composites and polymers within the manufacturing process, and generally rely upon a side-opening breech, rather than the M203’s slide-forward breech mechanism. By opening to the side, the third-generation systems are better capable of accepting 40mm rounds that are longer in length than the original M583 parachute flare round, which is 5.25 inches long. This is a significant and important feature as increasing numbers of less-lethal and medium-velocity 40mm rounds enter the market.

“Its primary purpose is to engage enemies in spaces that cannot be reached by direct fire. There are at least eight different rounds … for the M203 in the military arsenal.”

I evaluated the LMT M203 2003 40mm at the Echo Valley Training Center (EVTC). The EVTC’s Range 1 features a 0- to 300-yard stepped berm littered with car hulks and other such targets perfect for lobbing in high-angle 40mm rounds. I have had the privilege of handling and witnessing my friend’s LMT launcher in action numerous times. I used the M203 2003 with its pistol grip attachment as well as mounted to an AR-platform rifle. The primary 40mm round I used was the M781 practice round featuring an orange chalk plume to mark its impact. M661 green star and M583A1 white star parachute flares were sparingly used due to weather conditions conducive to fire. I also fitted 12-gauge and .22 LR adapters into the LMT 40mm tube for testing.

The XM1822 40mm adapter is capable of firing eighteen .22-caliber bullets at once from your 40mm weapon. A large pistol primer pressed into the bottom of the adapter acts as the impetus for the eighteen .22 LR shells. When the weapon is fired, this primer actuates firing pins inside the adapter that shoot off all eighteen .22 LR bullets at once. Its effective range is minimal, but it’s fun to experiment with. The recoil and blast were surprisingly stout with the XM1822 adapter.

With a little refresher, it was possible to get three to five chalk practice rounds downrange in under a minute. There are various sights available for use with the LMT M203, including electronic red dots. Common units include ladder and quadrant types. The ladder sight features a front sight and notches marked in meters—50 meters, 100 meters and so on. You line up the rear post of the M16 with the appropriate ladder-step range marking and send a round downrange. A second sight available is the quadrant type, which is attached to the left side of the AR’s carrying handle. It is has two components—a horizontal bar and a protractor-style radius bar—and the user looks down the side of rifle to align the front and rear posts of the sight. To test the LMT M203, I utilized an LMT Rail Grabber Quadrant sight mounted to a quad-rail forend. It is similar in nature to the carry handle quandrant sight.

The LMT M203 proved viable even without access to HE rounds. The number of round types and adapters keeps the 40mm launcher relevant for anyone considering investing in one in terms of cost and time to fill out necessary paperwork. 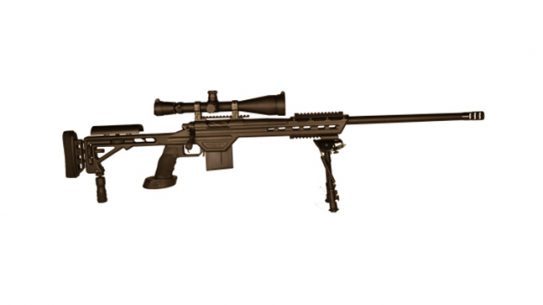