Along with an integral suppressor, the Leonidas boasts several top-notch features, including a Seekins Precision handguard and a match-grade Lilja barrel.

It has taken a few years, but the popularity of the 300 Blackout is starting to settle. As the initial hype has faded and ammunition availability increased, its practical value has become more evident.

That process is common in the firearms industry, but it’s more intense today thanks to social media and the immediacy of the news cycle. Items billed as “earth-shattering” and “groundbreaking” come down to earth eventually. Many disappear, but others find their niche after being proven through testing, evaluation and honest use. Many new cartridges have experienced this, and the 300 Blackout is the latest.

The 300 BLK does some things incredibly well. It is currently one of the best choices for suppressed short-barreled ARs. With few exceptions, suppressing barrels shorter than 10 inches in 5.56mm or 7.62mm can be problematic. You can make a short-barreled 7.62x39mm work, but it’s hard to find reliable magazines for these carbines. Terminal ballistics with the 300 BLK remain effective, with barrels as short as 8.5 inches keeping them useful. It’s also the only chambering I know of that will allow an AR to shoot subsonic and supersonic ammo interchangeably without alteration. Properly suppressed, these guns are very quiet—incredibly quiet with subsonic ammunition.

Suppressors designed for this caliber offer sound suppression that’s almost unattainable with other calibers and short barrels. Therefore, my 300 BLK rifles typically remain suppressed. If this option is legal in your state, it’s a great way to go. Integral suppressors are another great option for today’s shooters.

Permanently attached suppressors are generally considered integral, or part of the barrel. They are welded or otherwise attached so that they cannot be removed for use on another barrel or rifle. Doing so means the BATFE only requires one tax stamp, saving money and transfer time. Popular for years on rimfire rifles and some precision rifles, they fit the bill nicely for this caliber. There is little ballistic advantage to a longer barrel with the 300 BLK, so short barrels are common. That’s fine at longer ranges using proper ammunition, but many use subsonic ammunition, making suppressors the norm. Few unsupressed 300 BLK ARs work well—or at all—with subsonic ammo. Suppressed operation is essential, making integral designs such as Liberty Suppressors’ Leonidas exceptionally useful.

I’ve used Liberty Suppressors’ multi-caliber Mystic X sound suppressor on a number of weapons. It’s been a workhorse for many evaluations. I’ve tested it with pistols, rifles, SBRs and other stuff using the company’s adapters, and its quality has been excellent overall.

The Liberty Leonidas starts with the opposite premise. Designed from the ground up as a 300 BLK-specific suppressor, it’s permanently attached to the barrel (yours or one from the company) and provided in a complete upper. Liberty wanted it to be as quiet as possible while being consistent with subsonic and supersonic ammo. The company can build one using a barrel and parts you provide, but it’s easier to order the upper. If you add all the required parts and the cost of the build, the complete upper costs about the same. Plus, Liberty uses excellent parts. You can also order a complete Leonidas rifle.

Liberty starts with a Seekins Precision iRMT-R billet upper and a matching 15-inch, free-floating Seekins MCSR handguard. With its 1.8-inch inside diameter, this handguard provides plenty of space for the suppressor while offering KeyMod slots along the sides and bottom. The barrel is an 8.5-inch, match-grade Lilja unit with a 1-in-8-inch twist rate and a low-profile gas block. The gas tube is profiled to fit the system. Liberty also installs a nickel-boron-coated M16 bolt carrier group and a BCM Gunfighter charging handle.

The suppressor is monolithic and permanently attached to the barrel. It’s covered (including the gas block) by a light outer skin held on by a large, knurled front cover/knob. You can order the core in titanium and save almost a half-pound. The barrel/suppressor assembly’s overall length is 17.4 inches.

The Liberty Leonidas sent to me for testing was a standard model with no titanium core. Its balance felt fine, although the weight savings is nice. I tested it using two lowers. The plan was to use my Seekins Precision lower for most of the testing with a couple of runs using a Colt M16A2 lower. But things changed on the range. The gun worked so well on select-fire that the Colt saw most of the action. I completed the accuracy testing using the Seekins lower. Sighting was accomplished using a Trijicon MRO along with a Trijicon VCOG using a 300 BLK reticle. I used one of Patriot Ordnance’s new select-fire trigger packs in the M16A2 lower along with an ambidextrous Battle Arms Development select-fire safety. The Seekins lower uses a Larue Tactical two-stage trigger. The magazines were primarily from Lancer Systems.

One of the best ways to test an AR’s proper tuning is on full-auto. You know things are tuned well when you get a steady stream of expended brass at about 3 o’clock. The Colt lower uses a Sprinco white spring and an H3 buffer that has proven to work with many uppers. Although it can be a bit much for subsonic loads, it’s about perfect for full-power ammunition. Loading the subsonic rounds first, I expected a single-fire rifle. Nope. The Liberty Leonidas was impressive—one of the most impressive 300 BLK rifles I’ve tested. Loaded with 20 rounds of Gemtech 187-grain subsonics, the gun spit out a steady stream in a perfect pile. That was repeated using Hornady 208-grain A-MAXs and Remington 220-grain OTMs. There wasn’t much excess gas, and the gun was perhaps the quietest semi-auto I’ve tested. 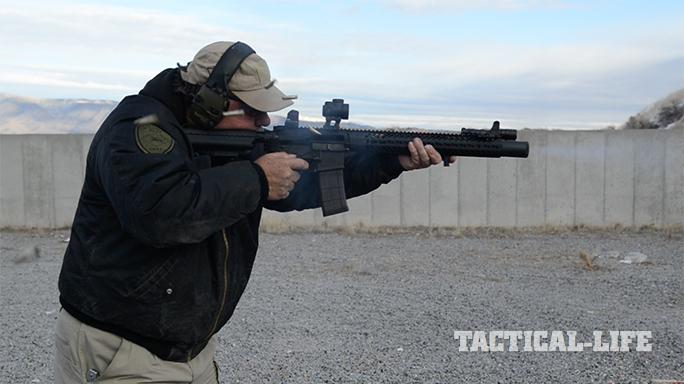 DoubleTap’s supersonic load using Barnes 110-grain TAC-TX bullets represented the other side of the spectrum. These rounds are loaded on the fast side. Yet nothing changed, other than how quickly those 20 rounds were expended. The bolt speed was considerably faster, but the ejection remained consistent. The rifle created the same pile, just farther away. Excess gas was substantial—eye-watering, in fact. Thankfully, most shooters won’t dump supersonic rounds like this, but it’s a good test of the upper. I repeated the drill with Gemtech’s 127-grain Noslers and 147-grain FMJs, and Barnes’ 110-grain TAC-TXs with the same effect. The Leonidas was tested with every 300 BLK load in my shop for reliability. All of it worked, whether sub- or supersonic.

I’m no fan of subsonic ammunition for self-defense, but running this upper in full-auto is inviting. There’s some indication that the original intent behind the 300 BLK was to simulate an integrally suppressed MP5SD 9mm submachine gun. After spending the day with the Liberty Leonidas, I can see why. Having spent many hours with an MP5SD, the Leonidas is almost identical, with zero recoil, no muzzle rise and tack-driving accuracy within 25 yards on full-auto. Running a 10-round burst at 15 yards, it almost cut one hole. The cyclic speed was controllable, and the POF trigger was excellent. All of this occurred while the gun remained very quiet with flawless operation. It was impressive enough to prompt a closer look at the latest subsonic ammo designed to expand. For home- and across-the-room defense, this setup would be impressive.

Using mostly Barnes 110-grain VOR-TX rounds, the gun was equally as controllable. The recoil was noticeably harsher but not problematic. Doubles and triples were pretty easy, with excellent accuracy. Working in and around my truck, the rifle was handy. Loaded with proper self-defense ammo, this 300 BLK upper runs flawlessly, making it perfect for patrol work or home defense. Ballistics testing with some 125-grain expanding loads was impressive. Will the 300 BLK replace the 5.56mm? For many reasons, no. But it’s an impressive little round when suppressed for urban use.

While shooting for groups, the accuracy was exceptional thanks to the Lilja barrel. Every Lilja barrel in my ARs is very accurate, and this was no exception. The gun shot sub-0.5-inch groups using the Hornady 208-grain A-MAXs, and many groups were similar. Gemtech’s 125-grain Nosler rounds worked incredibly well in this upper, with their best group at 0.75 inches. This is another advantage over the 7.62x39mm. I’ve yet to test a 300 BLK AR that’s not accurate. 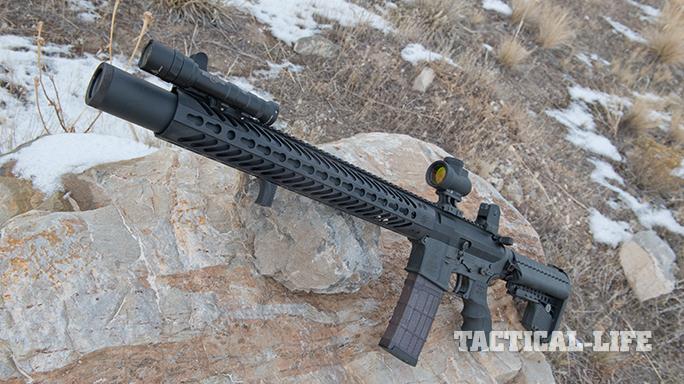 I’m not normally a fan of integrally suppressed rifles, but the Liberty Leonidas is now an exception. All of my 300 BLK rifles are suppressed, and this just makes it permanent. With a practical barrel length of 17.4 inches, the Leonidas is longer than my other setups. But none are as reliable, quiet and accurate.

Like every 300 BLK I’ve tested that runs sub- and supersonic ammunition, the Leonidas is on the harsh side with full-power ammunition. That’s not much of a problem, but having tuned rifles to run with just supersonic ammo, it could be softer. Yet those guns won’t run the subsonic stuff. It’s a trade-off I’ve experienced with similar rifles.

The Liberty Leonidas worked so well with my M16A2 lower that I upgraded it with some new parts, and I expect to leave the rifle that way for some time. Coupled with the POF trigger, it’s one of the most reliable, accurate and easy-to-shoot short-barreled rifles I’ve tested. If you’re in the market for a suppressed 300 BLK, the Liberty Leonidas should be at the top of your list.