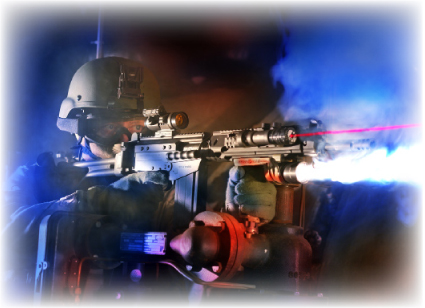 “Oooh, look at that!” I say as I open up a box on the glass countertop of my local law enforcement gear supplier. The sales associate and friend, Kim, says to me “Abner, you’re not right in the head.” You know, she’s right. I get slightly over-invested in a new piece of gun-tech when I first handle it. I have to visualize it on a weapon for a few minutes before deciding to buy; this involves squinting of the eyes and grunting noises. Sort of like Yoda with a head cold. 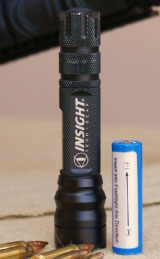 What can I say? I’ve been a lifelong gun junkie. I like guns like most guys like sports. One of the perks of being a writer and a cop is that you get to mess around with guns and gear, and test them on- and off-duty. I specialize in all things AR. So with that in mind, I reached out to several manufacturers of lights, lasers and rails. Aside from the gigantic mess of boxes I have in my home, I have quite a collection of cop-friendly goodies to tell you about.

Insight Tech-Gear H2X Arcturus
The original lights that hit the market in the ‘90s offered us much needed solutions to our tactical lighting issues. It was a long painful road to get to where we are today.
The current line of pistol and rifle lights on the market is vast. There’s a light for every budget now. The one thing most have in common is that they’re LED (light emitting diode) powered. LEDs offer much greater control over power consumption and some of the more recent stuff on the market is even digitally controlled. What this means is that there is no longer a physical connection between the activation switch and batteries. For all intents and purposes, it’s “Fly by Wire” technology being applied to flashlights.

The best example I can give of “Light by Wire” is the digitally controlled series of lights from Insight Tech-Gear. Their duty and pistol lights are bright to the extreme and offer digitally controlled power consumption technology. This software is so exact in its power use that when their H2X Arcturus LED duty light draws near to the end of its current charge, it will give you a little blink to let you know: “Charge me, now, please.”

What is really unique about this light is that there is no discernable loss of light quality from start to finish, oh, and yes, you read that right, it is rechargeable! Coincidentally, it will take 2 hours at the full 120+ lumens to run it down and an obscene 300 hours at its lowest setting to do the same. On more than one occasion folks have asked me about “that cool light.”

It operates with a tail cap that has four functions. Press once and the light turns on at the full 120+ lumens, press again and the light shuts off. If you double tap it the light strobes with a disorienting illumination show. Press it down and hold, the light dims until you release it at your desired level. Also, if you hold the switch down continuously it dims down on “auto” till it’s just enough light to read a driver’s license to dispatch without losing your night vision and/or giving your position away. If the subject happens to advance on you, you can make them re-think this maneuver by using the sharp, crenulated strike bezel to “pause” their attack.

It neatly fits into a Bianchi AccuMold Elite, 7911 Compact Covered Light Pouch or, likewise, into an open top design provided by the 7926. Bianchi’s AccuMold Elite series of gear is rough-and-tumble gear for the patrol officer. It looks like leather but is infinitely more wear-resistant and well below half the weight and cost.

Because the H2X Arcturus is a tailcap-operated light, it can serve you well as a carbine-mounted light. Coupled with the Command Arms Accessories (CAA) FAS2 Tactical Light Mount, the H2X Arcturus becomes a threat cowering, illumination tool that is second to none. All in all, it’s a cop-friendly, thug-hating duty light and is a must when you’re out enforcing “BOOTS (Being Out On Third shift) Law.”

SIG SAUER Stoplite
I really like SIG SAUER weapons, but I must admit that the first time I saw an advertisement for their “STOPLITE Tactical Light” I scoffed. My skepticism is born of the myriad of less than impressive tactical lights currently on the market. I bow my head in humility now. Bright doesn’t do this light any justice.

I put in a request for the STOPLITE, mostly to be fair and give it a whirl. When I received it, I was surprised at how neat it was that SIG SAUER thought to put it into a smaller version of their trademark-blue pistol case. That should have been my first clue that this wasn’t just another light with a manufacturer’s name molded onto the side. I showed it to my wife and told her what a nicely put-together light it was, as I inserted the four provided CR123A batteries instead of the usual one or two. That should have been another clue, huh?

I then fiddled around with the selector dial, which is positive in its function and offers a soft “click” between selections of off, constant, temporary and strobe. Then I regrettably activated the strobe effect right into my face from about 8 inches away; don’t ask me why! My head snapped back in pain as an arc of light blasted me in the face with an almost physical effect of impact.

Apparently this light is bright enough to render even eyelids as inadequate cover against its onslaught. The effect one gets from people when they’re hit with this light is an instantaneous “duck and cover” maneuver. Their hands will automatically bat at the light as if somehow they can stop the abuse on their eyes. The point is their hands won’t be busy attacking you.

SIG SAUER also thought to add an ingeniously designed accessory laser. It plugs into the side of the light and is replaceable or removable just in case it’s damaged or unwanted. After the purple blobs left my vision, I decided that yes, indeed, SIG SAUER’s “To Hell and Back Reliability” now extends to their new STOPLITE as well.

CAA X6X 7-Rail System
When I was snooping around the Internet looking for some new gear with which to trick out a test rifle, I came across Command Arms Accessories’ (CAA) new seven-rail system, the X6X. When I pulled the X6X out of its box and counted off the rails, I discovered to my surprise that it had six, plus one very special forward extending rail for a total of seven. You really can’t call this system a quad rail; there’s more than four.

The X6X is the real deal. This isn’t a flimsy little tripe. It’s heartily constructed of billet, aviation grade aluminum, using CNC machinery. It’s easy to fit onto any standard delta-ring-configured AR. It requires no gunsmithing and comes complete to you with a full complement of custom TDI Arms rail covers that have a molded space behind them to allow light cables to travel through. How could you possibly go wrong with that?

In addition to its excellent functionality, the CAA X6X 7-Rail System has one really unique feature that stands out. It’s the small singular FL1 rail that protrudes right over the top of your barrel. Fully adjustable for elevation relative to the bore alignment, this rail is an outstanding platform for lasers. When mounted onto rail seven, the laser becomes part of your barrel and bore alignment enters a whole new level of accuracy.

What makes the X6X feel like a free-floated rail system are the two small studs that protrude from its rear section. These coincide with the sprockets on your barrel-locking lug, and totally lock it down against the upper receiver. The dynamic tension created between the front sight tower and locking lug creates a solid mounting surface for a minimum of seven pieces of gear and guile.

Final Notes
With the advent of ever increasing technological advances in gear and weaponry, there is no doubt that our lives in LE and military work are going to get more bearable and certainly safer. Now all we need to do is master the “self-warming donut.” Any takers?