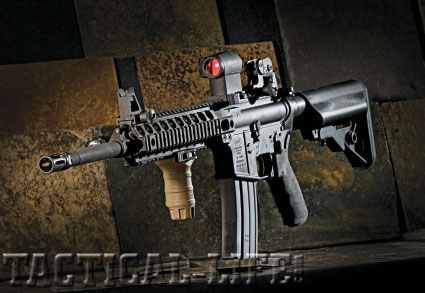 Ever wanted to rebarrel an AR-style rifle without changing uppers? It’s a possibility that exists with the Lewis Machine & Tool MRP (Monolithic Rail Platform). Conceivably one could go from a CQB (close quarter battle) carbine to a short barrel rifle (with the proper Federal involvement) to a special purpose rifle by changing only a barrel. A designated marksman needs different optics than someone engaging in room combat, but it’s still easier to tote than three different uppers. LMT offers MRP chrome-lined barrels in 10.5-, 14.5- and 16-inch lengths, and makes stainless steel barrels in 16 and 18 inches. 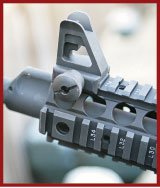 The rail in “Monolithic Rail” is not separate from the receiver. It’s all fabricated from a single block of aluminum. This allows the quick-change barrel system using only a pair of Torx bolts to hold it in place. One of the bolts goes through a recess in the barrel extension. The other serves to tighten the receiver around the barrel extension. The barrel is free-floating. The rail extends along the receiver top from back to front. This isn’t a rail fore-end on a conventional upper receiver.

Lewis Machine & Tool Company is a long-standing supplier of components, designs and testing for various branches of the US Armed Forces, other government agencies and other firearms manufacturers. Founded in 1980, LMT sought to design and build firearms and components for military, law enforcement and government agencies.

Aside from building accessories and components for M16/AR15 systems, LMT designs and builds complete weapon systems, grenade launchers and the Monolithic Rail Platform for hard use environments.

LMT parts are often used in the best “builds” by those who start with bare receivers and put together AR15s. The LMT has a top-tier reputation and it’s well deserved, based on information from the folks I know who are deeply into the black rifle.

Our sample was the CQB MRP Defender. It had a 16-inch chrome lined barrel, chambered for 5.56x45mm NATO. The rate of twist is the current military standard, 1-in-7 inches. The trigger and bolt are standard. The stock is a SOPMOD type, marked “LMT.”

The lower receiver is the LMT CQB MRP Defender that’s marked “Defender 2000.” The pistol grip is the unit by ERGO, one I’ve used on other projects. The upper is the MRP, a one-piece receiver and a free-floating handguard/rail system. The rifle shipped with a 30-round magazine, sling, operator’s manual and a rail-mounted back-up iron sight. There is a “tactical” front sight, a torque wrench, a driver and some rail panels.

The free-floating barrel gives some accuracy edge. It also would tend to keep things cool like the handguard, optics and the barrel. Looking through the quad-rail fore-end, you can see the gas tube. Unlike the standard AR gas tube, this one is straight line from front to back. A low-profile gas block is surrounded by the handguard. The gas block is pinned on and a roll pin holds the gas tube.

Available Accessories
For its first trip to the field, the LMT carbine was fitted with a few extras. The first was the SureFire Scout Light. A 100-lumen, LED-using white light, the Scout attaches to the LMT rails with a thumbscrew mount. One of the few things one needs to add to any long-gun expected to be used for defense, police work or military is the white light. We have to identify what we may be shooting at.

The next item is handy to have and it takes up little room. It’s the TangoDown Foregrip, a “Shorty,” in flat dark earth. It uses the quick detach lock lever. TangoDown’s Foregrip has an ergonomic design. The internal compartment is waterproof. Maybe of more importance is that there are patented switch pockets for Insight Tech-Gear and SureFire pressure switches. Addition of the tape switch that is provided with the SureFire Scout would fit into the TangoDown Foregrip and make the setup even handier.

The TangoDown Lock-Lever mount is a lever mount in which a lever pivots side-to-side to securely lock the mount’s clamp bar onto a Mil-Std-1913 rail. The Lock-Lever requires no tools to adjust and locks itself automatically when pressed shut.

Range Time
The LMT CQB MRP Defender just happened to make it out to the range during instructor day. A number of active duty police instructors got to play with the new carbine. They were not surprised to note that it worked without stoppage. The only time it quit shooting was when the magazine ran dry.

Commonly found aluminum 30-round magazines with the up-to-date green followers all worked with regularity. We also found that the LMT worked with current-generation MagPul P-Mags. The CQB got a little hot out there. The carbine was passed from troop-to-troop and there was a great deal of shooting. I found that, while hot, the CQB wasn’t cooking nearly as bad as some conventional ARs we’d had out there in the past.

Later, I had some precious moments to take the CQB out for some work on accuracy and velocity testing. Unfortunately, my time was limited. I removed the light, foregrip and Micro-T1. I installed a more conventional magnifying optic, the Valdada 2.5×10 riflescope. Obtained from Brownells, along with steel rings, a base for AR-rails and a pair of riser mounts, this was my setup for accuracy.

As light was fading, I had time to try only a pair of rounds for accuracy. Winchester Ballistic Silvertip put five hits into 1.25 inches. CorBon DPX shot a 2.5-inch group. I normally see 2- to 4-inch groups from carbine-length ARs with standard triggers.

I found that the LMT didn’t feel like a more common-variety AR I’d brought along to test. They both worked and were quite capable, but shooting them side-by-side, I found that the LMT CQB MRP Defender felt smoother. I’ve heard people say that the mid-length AR is a smoother operating gun due to the gas system. I’m wondering the same about the straight-line gas tube of the LMT carbine. It’s something to think about.

Final Notes
If you want to hang gear off a carbine, this is one of those to take a look at. If you want serious quality in parts, likewise. If you want the ability to change barrels without changing receivers, this is also a good choice. The LMT MRP CQB Defender is more than that, though. It’s a high-quality carbine for the typical serious uses we usually look at in these pages.

It can also be made for duty in plains varminting; I’d love to install a longer stainless steel barrel along with the Valdada Optic and take it along. I’m betting it’d be just what the doctor ordered. With that said, the LMT is a serious offering. Even if you never change a barrel, this is one to take a look at. 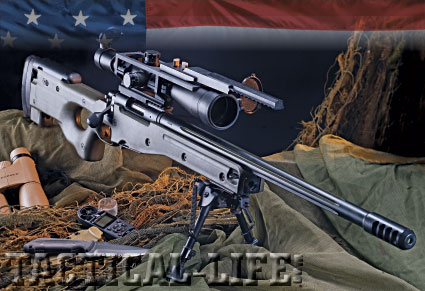 Ever wanted to rebarrel an AR-style rifle without changing uppers? It’s a possibility that…