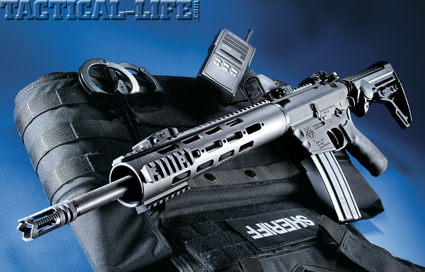 The Loki Patrol 5.56mm is shown equipped with a set of Midwest Industries back-up iron sights and an Insight Technology MRDS reflex sight.

It looks like an AR-15. It shoots like an AR-15. But, is it an AR-15? The Loki Weapon Systems Fighter (LWSF) Patrol Rifle is of course an AR-15. But, LWSF, a small but up and coming company, has greatly improved upon the original design. The result: A rifle that is ideal for the LEO looking for a tough and reliable 5.56x45mm patrol rifle.

The LWSF Patrol Rifle is clearly an improved version of the familiar AR-15, with a better design, stronger materials, and more comfortable ergonomics. Both the lower and upper receivers have been upgraded. The lower is machined from a billet of 7075-T6 aluminum. Loki’s improvements of the Mil-Spec lower include an integrated triggerguard. If you have ever witnessed an AR being built, it wasn’t uncommon for a triggerguard or wing to be broken while pinning the triggerguard—now this design weakness is gone. The complete guard is also oversized for bigger glove fingers. 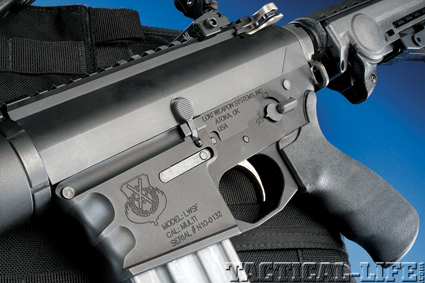 Loki also changed up the magazine well and frontstrap. The well is reshaped and enlarged, which helps speed a rapid reload. The frontstrap of the lower is reshaped for finger grooves. Regardless of your shooting style, at some point you are likely to have your support hand wrapped around the front of the lower. The grooves provide a sure grip. Loki rounds out the LWSF ergonomics by using the Ergo SureGrip pistol grip and F93 PRO stock. An ambidextrous sling plate is also standard on the Patrol model. 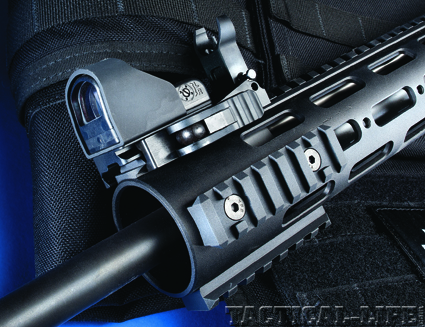 The author also tried out this non-traditional positioning of the Insight Technology MRDS forward of the front sight.

Like the lower, the Loki upper is also machined from a billet of 7075-T6 aluminum. The added rigidity subsequently helps with accuracy. It also increases the durability as the upper and lower do not flex as much. If you look at the sides of the upper, you’ll notice how much thicker it is than a traditional AR-15. Naturally, the upper has a forward assist. Both the upper and lower come in for a Type III anodized hardcoat and Teflon finish. The upper and lower receivers are matched for a reliable fit.

Fitted to the upper is a quality barrel. The rifle tested here has a 16-inch barrel. Of course, other barrel lengths are available. The barrel is a 4150 chrome-moly vanadium alloy per Mil-Spec B-11595. This is the same material the military uses in the M249 SAW machinegun. The barrel is chambered for 5.56x45mm NATO and is rifled with a 1-in-8-inch right-hand twist. The barrel is fitted with an M4 extension for improved feeding of the cartridge from the magazine to the chamber. The barrel receives a nitride treatment. The muzzle has standard 1/2×28 threading for a variety of flash suppressors and muzzle devices. The test sample featured the excellent Yankee Hill Machine 5C2 Phantom suppressor.

One of the things that I really like on the LWSF is the 12-inch modular handguard. The handguard is essentially round with a full length Picatinny rail along the top. Additional segments of Picatinny rail can be mounted around the handguard in 90-degree increments. This means the shooter doesn’t have to lug around heavy and unnecessary rails. The Loki handguard supports the shooter, not just the rifle. 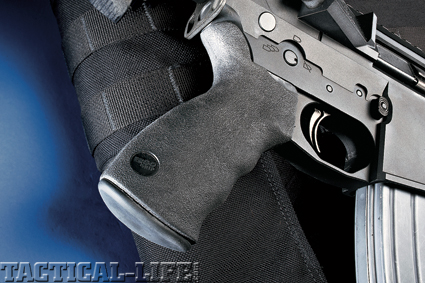 Another Loki enhancement is Fail Zero’s EXO coating applied to the bolt, carrier, fire control group (trigger, disconnect and hammer) and charging handle. The EXO coating makes parts last longer and require less routine maintenance. So what is EXO? EXO is a patented “nodular nickel-boron (NiB) surface coating.” According to Fail Zero, the NiB “nucleates on the surface atoms of metals.” The result is that the coating becomes part of the metal, hardening the surface; it’s not just a layer stuck on the surface. An EXO treatment also provides heat dissipation qualities, so the moving parts of the Loki last longer, run smoother and stay cooler. EXO can be applied to many metals including steel, aluminum and even titanium alloys. The bolt receives a Mil-Spec heat treatment and is rated for full-automatic.

Sighting Systems
With a rifle such as the Loki, my choice of sighting systems would be a combination of iron and optics. In this case, Midwest Industries flip-up front and rear back-up-iron sights (BUIS) were just the thing. The long, same plane upper rail of the Loki gives the BUIS plenty of length for the best possible sight radius. For optics on a rifle meant to be a fast-handling self-defense weapon, a Mini Red Dot Sight (MRDS) is the best choice. I selected Insight Technology’s MRDS on an American Defense quick detachable (QD) mount. The battery compartment for the Insight is located on the top and does not require the unit to be removed from its mount for a battery change. I routinely mount a MRDS as far forward as possible on the upper rail. In this location, the red dot is visible but the system does not obstruct the shooter’s view around it, although a more traditional location above the action obviously works as well. Whatever the location, the single lever of the American Defense QD mount I used makes it easy to remove the entire assembly if desired. 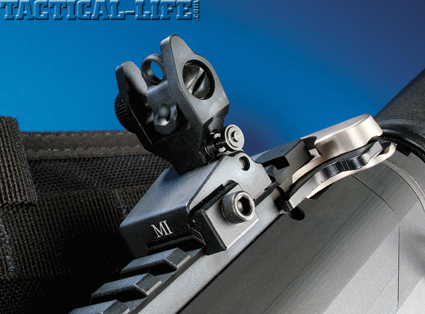 The Loki’s long strip of uninterrupted rail along the top allows flexibility in mounting a BUIS such as this M.I. rear unit.

In order to test the accuracy of the Loki with various type of ammunition, I used the DMS-1 scope by Millett. The DMS-1 is designed for both short and medium range shooting and has a power setting ranging from 1-4x. The reticle is a “donut and dot” with a full horizontal line and a half vertical line from the donut downwards. The flattop upper of the Loki is convenient for different types of sighting systems. But what makes this all possible is a reliable mounting system. With the Loki, I chose the FLT scope mount from GG&G. The FLT is available with 30mm rings. The core of the FLT is the AccuCam QD feature. The AccuCam allows a shooter to quickly install or remove the mount and is repeatable to within ½-MOA. 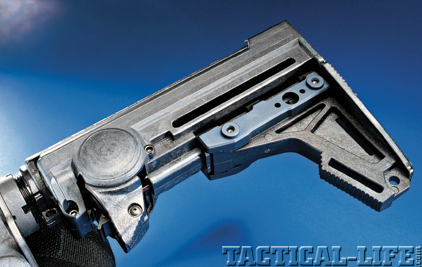 The Ergo F93 PRO stock on the Loki provided a strong and stable platform for the testing and evaluation of the carbine.

Range Time
I shot three loads for accuracy. First, I threw up a big sheet of paper at 25 yards to see where the un-zeroed scope would hit. Then I moved to 50 and then 100 yards. Adjusting the DMS-1 to a 100-yard zero, I began to shoot for record. (Please turn to page )
I used my preferred Hoppe 100 yards Zero target, which is printed in bright orange. However, I found that the donut and dot was difficult to get a constant sight picture with all that orange. There was not enough definition. So I changed to the Hoppe 100 yards Sighting-in target. It is mostly black with an orange expanded, quartered circle in the center. It was both bright and well defined. I increased the magnification to 4x, but I was also surprised to find that it took a great deal of effort to get a tight group with the DMS-1. Slightly frustrated and very cold—it was windy and about 30 degrees—I found that I could l exhale until the donut rose to the target, hold, press the trigger and repeat. Just as fast as I could repeat this process, I found these to be my best groups and a reminder that this is what the donut and dot sight was intended for.

The ammunition I used was the Wolf 62-grain Soft Point, Winchester USA’s 55-grain FMJ and Federal American Eagle 55-grain FMJ. I was pleased with these results. At 100 yards, the Federal shot a 0.60 of an inch, Wolf shot 0.70 of an inch and the Winchester shot 1.1 inches.

Final Notes
The LWSF Patrol Rifle is a very nice version of the AR-15. The rifle is shipped in a hard case with a 30-round magazine. The lower has engraved pictograms around the safety lever. Even ambidextrous controls are available by special order. A variety of finishes are also available, including FDE Cerakote and water transfer camouflage patterns. The LWSF Patrol is designed for steady, honest work. 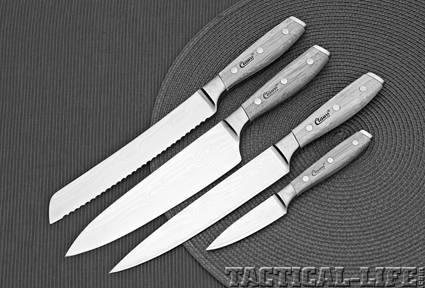 Besides classy good looks, this Damascus-bladed set will shine big time when it comes...