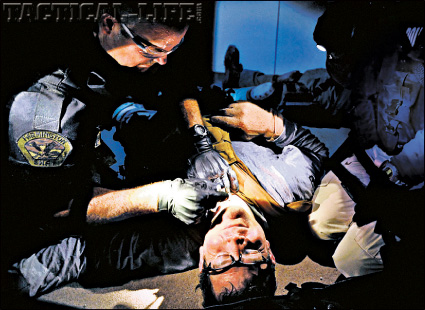 When you move tactically from a well-lighted area to a relatively dark area, it takes a short amount of time before your eyes can see the details or certain objects that may be present in the low light. This visual phenomenon is called “dark adaptation.” The occurrence of dark adaptation is of concern to tactical operators and tactical medics that move from well-lighted to poorly lighted threat environments and engage threats or treat injured officers. The early evening hours, commonly known as dusk are well known to be associated with poor visual perception. This is related to the reduced visual capability of the eye as light conditions change from light to dark. The rate at which dark adaptation occurs depends upon the intensity and duration of previous exposure to light. Those who work outdoors in the summer, when sky brightness is high, may show a deficit of dark adaptation for several days after exposure to sunlight and will not show absolute thresholds within normal range until the use of dark sunglasses has permitted recovery. Those, on the contrary, who work under artificial illumination may become completely dark-adapted in 10 to 20 minutes.

Rods and Cones
Light-sensitive cells of the retina fall into two classes, rods and cones. In general, the latter are less sensitive to light, but provide the basis for color discrimination and for finer visual acuity discrimination. They are most abundant, and spaced closest in the rod-free fovea, where they appear elongated and somewhat resemble rods. From the fovea, their density decreases toward the periphery of the retina.

The rods, although highly sensitive to light, play no role in color discrimination and give very poor visual acuity, owing to the complexity and multiplicity of their connections in the layers of the retina. They are absent in the fovea and their density increases toward the periphery, until a critical distance from the fovea is reached, after which the density decreases.

The cones in the retina of the eye experience a diminished sensitivity to color with decreasing amounts of light. The rods in the retina need time and a dark environment to become sensitive to the low-intensity light conditions.

When a person goes from a relatively light area to a relatively dark area, the pupil of the eye increases in size to admit more light. Conversely, the pupil tends to contract in bright light to limit the light that enters the eye. This process takes a few seconds, and as a person proceeds from one condition of light intensity to another, the person may be partially “blinded” until this process is complete.

A second reaction of the eye involves the reconstitution of the bright-red photo-sensitive pigment called rhodopsin and also known as visual purple found in the rods of the retina. Under relatively dark conditions, the cones of the eye lose much or all sensitivity to color and light. Vision in poorly lighted conditions is dependent on the functioning of the rods.

The rods do not distinguish color, as they process only visual impulses of black and white or a combination of shades of gray. The rods of the eye require rhodopsin in order to function. When an individual passes from bright to dim light conditions, rhodopsin must be replenished. Until this process occurs, vision is seriously impaired.

If you’re moving from lighted areas to dark areas on a mission, close one eye every time you move into a lighted area. If you keep closing the same eye and protect it from light, you can preserve that precious rhodopsin from being bleached out. When you enter the dark again, open that eye up and it will still be adjusted to the dark. This technique can save your life!

Scientific data indicate the rate of rhodopsin re-synthesis process may take place in approximately 10 minutes of total dark conditions. The same data indicates that the time required for complete dark adaptation can take up to 30 minutes or more.

It is paramount that during night or low-light operations that tactical operators and medics treat all illumination tools with care and not illuminate the face or eyes of fellow medics or operators.

The Visual Angle
Night vision is also affected by what is known as the visual angle. When a person wants to see objects in ordinary daylight, the person turns their eyes toward the object to be seen. This points the fovea, the most daylight-sensitive part of the retina, directly at the object. Because the cones in the fovea, or center of the retina, are insensitive to night conditions, looking straight at an object is not effective in seeking out dim targets after dark.

As the angle of view from the fovea is increased, the concentration of the rods becomes denser, and night vision is enhanced. At night, when illumination is less than that provided by full moonlight, the fovea of the eye is almost “blind,” and a person cannot see faint targets by looking directly at them but, rather one must look slightly away from them. This technique is best for nighttime vision.

Remember the characteristics of night vision are very different from those of day vision and special training and practice are necessary if you want see and work well under low levels of illumination. 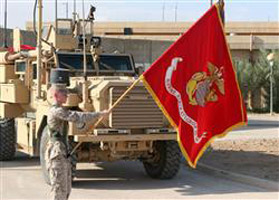 When you move tactically from a well-lighted area to a relatively dark area, it…