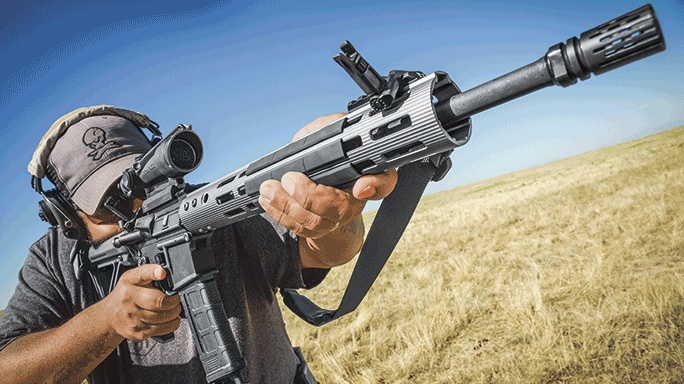 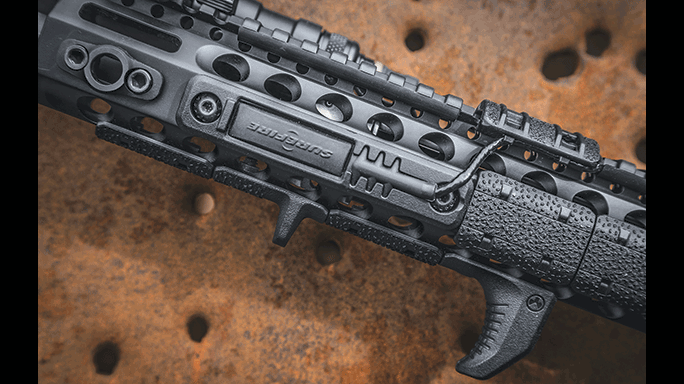 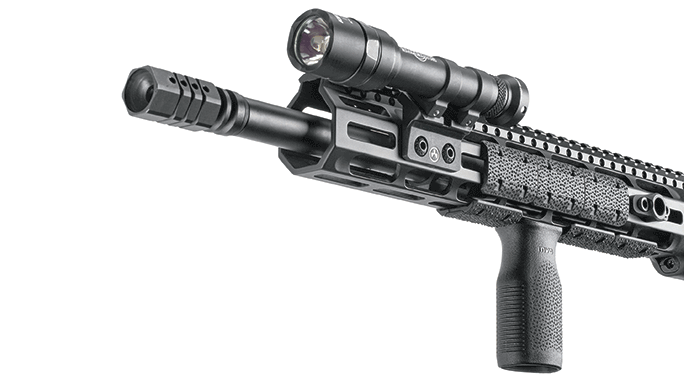 3 of 4
M-LOK’d & Loaded: Magpul’s M-LOK System Is a Necessary Upgrade
Like many Magpul products, the M-LOK MVG, rail covers and light mounts are low profile. 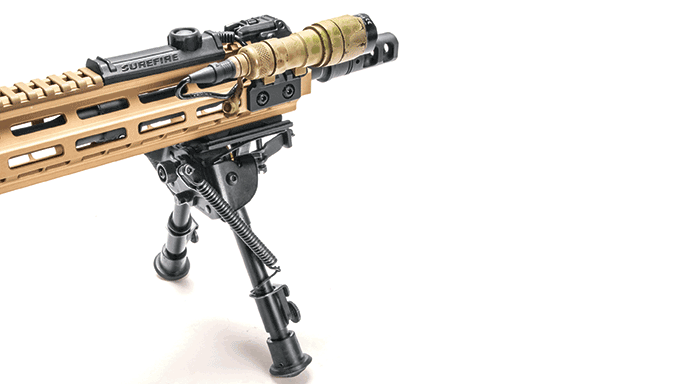 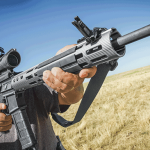 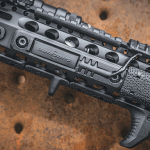 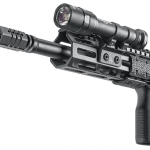 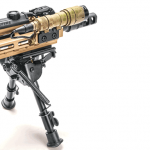 Men have been attaching things to their rifles for nearly as long as they have carried them in battle. In the modern era, the addition of accessories to a firearm bordered on the ludicrous as we entered the “Age of the AR.”

While various proprietary systems have come and gone, the MIL-STD-1913 (or Picatinny) rail has become nearly ubiquitous in the military and sporting arms markets. However, the system is not perfect. Picatinny rails tend to be both bulky and heavy, with unused sections of rail needlessly adding weight because they are not removable without the use of a grinding tool. For a rifle that may be carried for many hours and miles, additional weight is a high price to pay for the ability to add a light or foregrip.

With the combat soldier in mind, Magpul set out to develop a new system that removed all of the rails in favor of a design that added weight only when absolutely necessary. Starting first with the company’s existing proprietary design, the engineers continued the development process until the M-LOK system was perfected.

With the M-LOK system, heavy rails are removed and replaced with slots. Captive mounting screws with self-aligning T-nuts are then used to secure an accessory into place. Due to the design, the accessory is supported front to back and up and down by the handguard before the nuts are even tightened into place. Once locked down, the connection is extremely solid.

The M-LOK system is available to other manufacturers under a free license arrangement. This means that anyone can develop M-LOK-compatible components, and the consumer is assured that any M-LOK part will be compatible with any M-LOK rail, regardless of manufacturer.

The base for any accessory system on a modern rifle is the handguard. The handguard is where all M-LOK accessories attach to the weapon. Magpul offers five different handguards for the AR platform of carbine, mid and rifle lengths. Like many of Magpul’s products, these handguards are made of high-strength polymer that is designed for the most rugged duty possible.

All of the AR handguards are compatible with an A2-type front sight tower, and they can be had in one of four colors: black, OD green, stealth gray and Flat Dark Earth (FDE.) These two-piece handguards are direct replacements for standard handguards, and the standard retaining caps and delta rings are used.

While the AR-15 may be king with U.S. shooters, there is little doubt that AK-style rifles hold a special place in many shooters’ hearts and gun safes. To serve these customers, Magpul also offers M-LOK handguards for AK-47/AKM/AK-74-platform rifles. These handguards extend the grip area and have integrated heat shields in addition to accessory mounting points. AK-type handguards are available in the same colors as the AR, plus a plum color.

While rifles are extremely popular, shotguns remain an excellent choice for home defense as well as police and military duties. For these users, Magpul has M-LOK forends for the Remington 870 and Mossberg 590/590A1 series shotguns. These forends allow you to smoothly operate the pump action while putting a light or laser at the ready. These shotgun forends are available in black, FDE and gray. Additionally, these can be had in orange, a color often used by police agencies to indicate a shotgun designated for less-lethal munitions.

One of the rifle accessories that has become very popular over the last two decades is the foregrip. Foregrips on rifles can take several different forms, and the most popular seems to be the vertical grip. A vertical foregrip most often attaches to the 6 o’clock position on a handguard and extends toward the deck at a 90-degree angle. Magpul offers the M-LOK MVG vertical foregrip for this purpose.

The M-LOK MVG is a polymer grip that is lightweight and durable. It mounts directly to the M-LOK handguard. The edges of the M-LOK MVG are rounded, and it has a relatively short length. Combined with the company’s TSP texture, the M-LOK MVG works well with shooters employing both a traditional vertical grip and the thumb-break method. As with many of the other M-LOK accessories, these grips are available in black, FDE, OD green and stealth gray.

If you prefer an angled foregrip, Magpul offers the M-LOK AFG for the M-LOK system. The M-LOKAFG incorporates many of the design features of the original AFG while being lower profile because of the M-LOK design. Consequently, these rugged grips weigh little more than 1 ounce yet still improve the shooter’s control of the weapon during recoil. They are also available in the standard Magpul colors.

your hand from sliding forward during stressful combat conditions. This keeps your hand off the hot barrel and sight tower. Additionally, the texturing helps you control the gun’s movements.

For many, adding a white light to your rifle is important. After all, if you can’t identify your target in low-light conditions, how do you know if you should shoot? Magpul offers several possibilities for adding a light to your M-LOK-equipped rifle or shotgun.

The Offset Light Mount allows for the direct attachment of SureFire M300 and M600 Scout lights or other lights with a Picatinny-style mount. Additionally, Magpul offers an optional light kit that, when combined with the Offset Light Mount, allows you to attach nearly any tactical light with a body diameter between 0.75 and 1.03 inches. The company also offers the Cantilever Rail/Light Mount that extends the light forward of the M-LOK mounting points and keeps the flashlight tight to the gun.

For anyone running a SureFire flashlight, Magpul also offers a tape switch mounting plate. The mounting plate allows you to affix a SureFire ST pressure pad to the handguard, eliminating problems with switches coming loose during use.

Magpul rounds out the M-LOK line with a bipod mount, sling mounts and rail covers. While considered by some to be simple parts, each of these items is a critical addition to the use of a weapon outfitted with them.

Magpul offers over twenty-eight accessories along with dozens more M-LOK accessories offered by other manufacturers. M-LOK is a free licensed platform that has been adopted by well over a hundred manufacturers to allow greater compatibility of accessories.

The M-LOK system represents a huge step forward in the secure mounting of accessories to your rifle and shotgun. The system works well and offers substantial weight savings when compared with the older Picatinny rail systems. If you are looking to shave ounces from your gun, take a look at the Magpul M-LOK system. 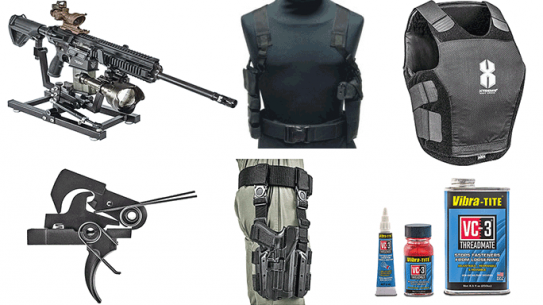 6 New Tactical Products To Help LEOs in the Field

The latest tactical products for 2015 take innovation to an incredible level.