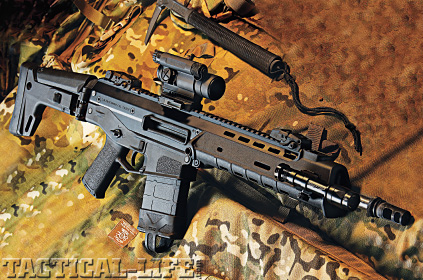 Imagine a young former US Marine, an end user, who designed a rubber-like gadget to help get a magazine out of its pouch and into his rifle faster, named his fledgling company after it and a few years later introduced a new rifle that shocked the industry. Hard to believe? Maybe, but that man was Richard Fitzpatrick and the name of the gadget and his company is Magpul.

Several years ago, Rich Fitzpatrick, showed me a prototype of a rifle he called the Masada, a weapon named after the great standoff made by the Jews thousands of years ago, the ultimate act of defiance. When Magpul unveiled the Masada “Adaptive Combat Rifle” rifle during 2007, all eyes were on it. Combining the most modern production methods with well-proven operating principles, this rifle seemed to combine the best of all worlds, but Fitzpatrick didn’t design it by himself. Putting together a brilliant team of Mike Mayberry, Eric and Brian Nakyama and Drake Clark, Fitzpatrick gives credit where it’s due.

Using a conventional short stroke gas piston to operate its rotating bolt group was just the beginning of this revolutionary rifle. The Masada was full of surprises and they were all good news for law enforcement, gun collectors and maybe even the US Military.

Between his Magpul and the Masada, Fitzpatrick had designed and produced a series of revolutionary buttstocks for the AR-15 platform, and a brand new patented adjustable stock was one of the hallmarks of the Masada. This straight-line, ergonomic stock complemented the modernistic silhouette of the Masada, but did not house any part of the recoil spring group, allowing the stock to fold. With lineage to the AR-18, Stoner 63 and L85, the bolt, carrier and recoil spring were all housed inside the upper receiver, which itself was unique.

Using a steel trunion, the upper receiver connected this with the right and left hardened steel (not aluminum) rails to guide the bolt, covered by an aircraft alloy housing with a full-length integral Mil-Std-1913 rail along the top. Mated to the upper receiver was a lower one made from the same reinforced, super strong polymer used in another Magpul innovation, the PMAG 30-round magazine also introduced with the rifle. The lower receiver housed a modular trigger pack and fully ambidextrous controls, all of which were comparable to those of the M16, except for its bolt hold-open/release, which operated like that of the FAL. The ambidextrous, non-reciprocating charging handle was also reminiscent of that used in the G3.

With a threaded extension, the upper receiver’s trunion accepted a barrel nut to retain the barrel extension, but the interrupted threads were large with a rapid pitch, and the nut had a folding handle and a ratchet lock. This system provided a fast and efficient quick-change barrel for the Masada. Above the barrel was a conventional AR-18 type short stroke gas piston reminiscent of those used in the 1934 Tokarev and the WWII German G43 rifles. Equipped with Mil-Std-1913 side and bottom rails, but the polymer handguard can be quickly removable by the same type pushpins used to connect the upper and lower receivers.

Only six prototype Masada rifles were made, two using different lower receivers with magazine wells to accept other calibers and magazines. In late 2007, Magpul licensed Remington/Bushmaster to fully develop and manufacture the Masada under its official and fitting name, the Adaptive Combat Rifle (ACR). With some subtle changes, the new Remington ACR should be available as you read this.

Massoud details
Not ready to rest on its laurels, Rich Fitzpatrick and his design crew were, in the meantime, busy designing another rifle. This was a slightly larger version in 7.62x51mm (.308) caliber. After Rich showed me the prototype rifle during early 2008, there was a lot of testing to be done. Although this is still ongoing, Drake Clark finally gave me clearance and I’ve just driven 700 miles to get a closer look at it and two more pre-production versions.

Called the Massoud, the rifle is named after Ahmed Shah Massoud, the “Lion of the Panjshir,” the Afghani leader of the Northern Alliance who stood as the pillar in the fight against oppression. Al Qaeda assassinated him on September 9, 2001. I wondered if it was just by coincidence that I had traveled to Magpul to see the rifle that bears this name on September 9, 2009.

The new Massoud is slightly (and I mean only slightly) larger than its petite sibling and it weighs exactly the same, but is 1.5 inches longer. Although describing the Masada is to describe the latest version of the Massoud, there are several distinctive exceptions. The newest Massoud uses a unique 4-lug bolt that allows a more efficient positioning of the AR-10 type extractor. The ejector is the standard plunger type housed in the bolt face.

The second exception is the Massoud’s new 20-round polymer magazine. Designed after Magpul’s now famous PMAG, this one is essentially a 21st Century SR-25 magazine and yes, it will soon be available separately for all rifles that use this magazine.

Although the Massoud’s barrel is easily changeable, it does not use the more rapid system introduced in the Masada. Instead, after pushing out the single handguard retaining pin and removing the handguard, a special wrench is used to unscrew the castle barrel nut in order to remove the barrel and its extension (with the bolt group locked back or removed).

Piston Operated
The last exception in how the Massoud differs from the Masada and even the first Massoud prototype is its gas system. Somewhat reluctantly, but knowing he could trust me, Drake Clark and Justin J., the designer of the interesting new gas system, removed the Massoud’s handguard to show it to me. Refraining from using the one word that would describe its operation, I will tell you that Magpul describes it only as “Piston Operated.” I can also tell you that I have never seen anything like it, but that it is utterly simple with a reduction in moving parts and weight.

The new system was designed specifically to enhance accuracy and to reduce weight. Just as important, it was conceived to increase reliability by prolonging dwell time before the bolt unlocks. Until this new system is fully patent protected, it will remain a closely guarded secret.

In comparing the first prototype Massoud to the two current rifles, I noticed little difference other than the departure from the early rifle’s Masada style short stroke gas piston system and some changes in the handguard. The new gas block is user adjustable via a unique pivoting lever with four settings: Normal, dirty, suppressed and off. All barrels are Krieger stainless steel and are match grade. Of course there was also the flat dark earth color of the early gun that showed the rigors of having fired more than 10,000 rounds (it has never been cleaned). The two new guns are black, but would be offered in different colors if they were mass-produced.

One aspect of the Massoud that helped reduce weight was its use of Magpul’s ambidextrous folding backup sights. Not BUIS, the generic acronym for such sights, as these are made from the same PMAG tough polymer with steel pins, blades and apertures. Magpul has appropriately named them MBUS (pronounced em-bus). Weighing almost nothing, these sights are super fast to deploy (even quietly) and are almost as fast to replace to their folded position. Designed for easy mounting on a receiver and handguard top rails, MBUS come in black, flat dark earth and foliage green. They cost a fraction of what steel BUIS do and have become my favorite backup sights.

In addition to barrel lengths and handguards, the Massoud’s lower receiver will accept any of three Magpul buttstocks designed for it and the Remington ACR. Two of these are based on current Magpul designs with the third being the one described above. The fully adjustable PRS (sniper) buttstock was designed for the main long-range precision version of the Massoud.

Range Time
One thing that surprised me was the total ergonomics of the Massoud, as well as how petite and lightweight it seemed. With an experimental carbon fiber barrel I was shown, the standard rifle is lighter than its Masada counterpart. All controls operated smoothly and were accessed easily. Like the Masada (now the Remington ACR) the Massoud’s controls are measurably superior to their AR-15/AR-10 counterparts.

Traveling to a private range, we shot all three Massoud rifles, either for groups or informally. Quite surprisingly, the modular trigger group produced an excellent let-off reminiscent of the Sig Sauer 550 Series, and far superior to any standard AR-15 type trigger I have used.

I shot the heavy barrel precision Massoud rifle prone off the bipod at 100 yards and had no trouble putting five rounds of Black Hills .308 Match into an inch using a Nightforce 5.5-22x50mm scope and LaRue Uni-Mount, but the rifle does even better from the bench, producing 5-shot groups of well under 1-MOA. The precision long range Massoud was equipped with a Gemtech Sandstorm 7.62mm caliber titanium suppressor and the carbine was tested with an AAC suppressor.

Both standard length Massoud’s were shot informally offhand using an Aimpoint CompM3 Red Dot Sight and I was surprised at how controllable they were on rapid fire, as well as the fact that that they seemed to recoil only a little more than a .223.

Final Notes
While the Massoud is essentially a 7.62x51mm rifle, as with all others of the breed, it could be had in virtually any caliber using a case based on the .308. These would include the .22-250, .243, 6.5mm-08, 7mm-08, .338 Federal and more, but here’s the frosting on this caliber cake. Any of these caliber changes would require only another barrel in the particular caliber. You can use the same bolt and same magazine, and only a small wrench to make the change.

While Magpul’s new SR-25 type magazine will surely be a huge success, what about the Massoud? The design is certainly high on the list in all categories. When you think about all the millions of dollars spent by big companies in designing and developing so-called “state-of-the-art” rifles, you wonder how such a rifle as the Massoud could come from a relatively small company. I believe it’s the result of a team composed not only of engineers, but also of real end users and “gun guys” thinking outside the box and welcoming input from others. Whether or not the Massoud goes into full production will depend on demand and the political climate, but more than one company has expressed interest. 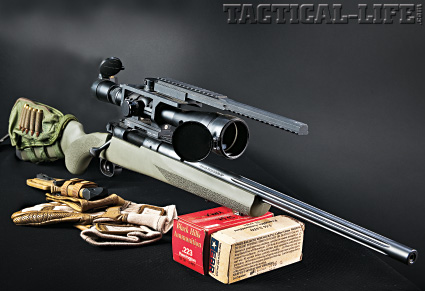 Imagine a young former US Marine, an end user, who designed a rubber-like gadget…