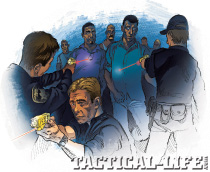 Editor’s note: The following is a true story. The officer’s names and agency have been changed or omitted. The suspect’s names are not used to protect the guilty and the stupid.

Ask any street cop and they’ll tell you, the combination of alcohol and male testosterone, especially on a hot weekend night at closing time, frequently leads to aggression, fights and riotous actions. It can be quite a combination, which tests the mettle of the best of law enforcement. Agencies with downtown bar districts often offer overtime details to help keep the order—and it can be a tough way to make an extra buck. Try as you might to end the detail without a confrontation, this is oftentimes impossible when “liquid courage” eliminates common sense in many people and then fuels stupid acts.

This is the situation that our modern cop warriors found themselves in, one rowdy weekend. Working off-duty providing street security in a downtown bar district, our LEO’s (one sergeant and two patrol officers) were confronted with 200 to 300 bar patrons spilling out on the street after closing time.

What started as an attempt by the sergeant to arrest one subject for disorderly conduct—violent and turbulent—soon spiraled out of control. The suspect, as so many drunkards do, refused to put his hands behind his back for handcuffing. The sergeant was able to secure one wrist with a handcuff and then the suspect began attempting to pull away. Attempting to control him, the sergeant pushed the suspect up against a parked vehicle, pinning him against the car.

At this time, 10 to 15 of the suspect’s friends rushed the police sergeant, attempting to free their friend.

Ready To Tase
Drawing his X26 Taser, the sergeant switched the manual safety to the “fire” position, which turns on the white light and the red laser beam. Using verbal commands and pointing the laser at the 15 suspects, the sergeant was able to keep them back momentarily.

A second officer arrived on scene and then a third, which increased the odds slightly in the good guys’ favor, but three officers to 15 thugs is still not good. With the suspect now handcuffed, the situation turned dire when one officer tripped and fell to the street. Like so many street altercations, falling or intentionally going to the ground with multiple suspects around is a recipe for a stomping which is exactly what happened. Our officer was booted in the head by at least one of the 15 suspects.

Tasers Deployed
Sergeant “T,” told me the story this way after the officer fell: “That’s when I smelled the glorious smell of ozone and heard the pop, pop, pop and multiple crackling noises of X26’s at work.” The original suspect, a former collegiate wrestling champion, was hit with the probes fired by the sergeant’s Taser. According to Sergeant “T” he, “went down like a sack of potatoes” and said after a five-second X26 deployment, “I don’t want anymore.” In all, four Taser cartridges were fired, plus several drive stuns, to control the crowd and make four arrests.

Advantage Taser
In the force options available to law enforcement today, the Taser has distinct advantages. The X26 is outfitted with a small white light to identify a threat and help neutralize it by illuminating the target. The red laser is not just an aiming aid but also can be used to back down a suspect (or suspects as in this case). After all, who wants to be first to get hit with 50,000 volts? Yes, pepper spray can and has been used in these circumstances, but the two-to three-ounce cans that most officers carry can only project out to about 9 feet (compared to the standard Taser 21-foot cartridge) and are depleted in a few seconds. Batons are an effective use of force but using them on suspects in front of a crowd can oftentimes escalate the violence.

It is imperative that officers carry multiple Taser cartridges, as missing your intended target or multiple suspects that need to be controlled will require it. Also, officers must train diligently on their empty-hand control-skills, as the Taser is frequently used before, during or in conjunction with control holds and strikes.

The patrol sergeant credited the Taser and quick reloads with keeping the crowd back and limiting officer and suspect injuries. What is certain in this case is that what could have been a very violent incident against law enforcement was averted, thanks to good, aggressive officers who were equipped with the latest in electronic control devices. 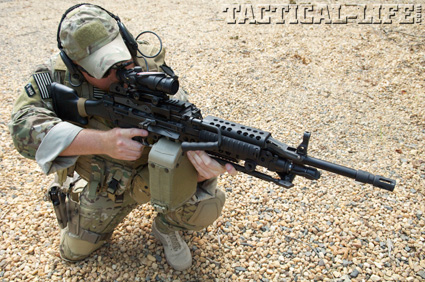 Editor’s note: The following is a true story. The officer’s names and agency have…