by Matt Berger
in Accessories, Gear
0

1
SHARES
30
VIEWS
Share on FacebookShare on Twitter
The MGI Marck 15 Hydra represents the biggest advance in AR-15/M16 design since its inception. It can be converted to more than 16 various calibers with its QCB-D upper, modular lower, various barrels and mag wells. Shown here with a SureFire Foregrip and EOTech HWS.

There are a seemingly endless number of makers turning out AR-15 rifle and carbine variants. Many of them offer a quality product, and a few don’t. It’s our goal to sort the two out. Now and then, however, a manufacturer goes beyond quality and incorporates innovation into their AR-platform weapon. The Marck 15 is one such gun. It represents the biggest design advance in the history of the AR, and is intriguing by its own merit. 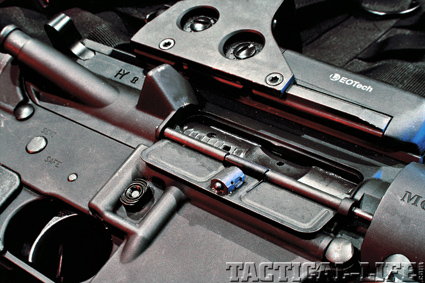 While the ability to switch between calibers may seem like a complicated process, the average shooter can do it in around 90 seconds with MGI’s Marck 15, and all of its controls retain the familiar A2 configuration.

Modular Design
That in itself is very useful, but it’s been done before with various uppers. What may pique your interest, however, is that the Hydra is capable of shifting to another caliber in roughly 20 seconds, without tools, and without changing the upper. To be realistic, the average person will probably make the transition in 90 seconds, likely faster with a bit of practice. The Hydra takes it a step further, though. It’s one thing for a weapon to do so with expensive proprietary components, but the Hydra does it all with standard barrels and magazines.

MGI’s Marck 15 Hydra can be configured to accept AK mags, which should come in handy for soldiers abroad who have captured enemy AKs. The Hydra’s adaptability even gives police officers an edge when they need to switch to .308.