by Philip Null
in Ammo, Gear
0

In 2006, the Naval Surface Warfare Center first announced the development of a 5.56mm round with reduced ricochet and limited penetration (RRLP) characteristics specifically for use in close-quarters battle. A ballistic match to the M855 ball (62-grain), the new frangible rounds proved their value for engagements at short range, with greatly reduced ricochets and limited over-penetration of walls, doors, and some furniture that would otherwise endanger teams and innocents. The first RRLP rounds produced under contract, by Black Hills Ammunition, accomplished mitigation of the risks while maintaining lethality. In testing, their .223 62-grain RRLP ammunition fragmented against 0.20-inch steel plating while easily penetrating and causing severe wounds to soft tissue. 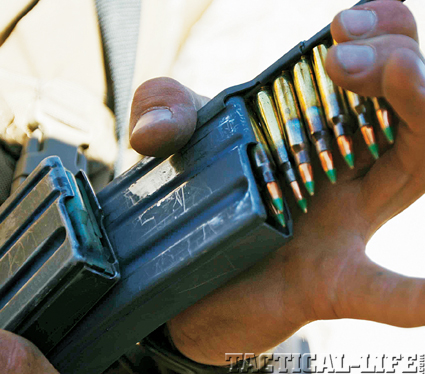 The bullets are fabricated from a mix of powdered metals such as tin, copper, and tungsten, that are pressed together at room temperature to produce a high-density material, with no heat treating or sintering necessary to achieve density. DoD Photo.

Frangible Vs. Duty
There is significant confusion regarding the lethality of frangible ammunition and its potential for use on-duty. Frangible projectiles are specifically designed to break apart into small, less harmful pieces upon contact with hard surfaces, maximizing the round’s transfer of energy to the target while minimizing the chance that pieces of the bullet will exit the object at dangerous velocity. Following impact, the small fragments of the round quickly lose energy, limiting the danger to anything else within range. This is true even at muzzle-contact distances, where frangible bullets can be fired with little worry the bullet will ricochet and hurt the shooter or others in the immediate vicinity. Against less dense materials, including soft tissue, the rounds function like normal ball ammunition. 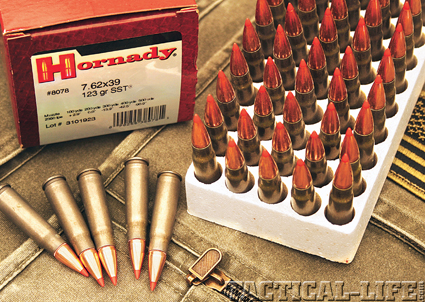 Rifle enthusiasts will appreciate the Hornady 7.62x39mm SST rounds, which complement new and traditional rifles chambered for this celebrated cartridge.