by John Fasano
in Accessories, Gear
0

The streets are changing. In a world where a domestic call-out can turn into a tactical situation and the thugs in urban centers can turn out to be terrorists, the patrol rifle has almost completely supplanted the trusty 12-gauge pump shotgun as the street cop’s onboard companion. But even as our troops face up-armored opponents in the sandbox, our police and tactical squads back home are facing heavier firepower as well. The 5.56x45mm NATO cartridge may not be enough.

Power To The Patrolman
Enter the Lewis Machine .308 MWS (Modular Weapon System), the first operator-interchangeable-barrel, monolithic-rail-platform rifle chambering the .308 Winchester caliber. The addition of an entirely new weapon chambered for the .308 will give police operators the added benefit of the greater accuracy, power and extended range offered by the 7.62mm round.

The rifle has been in development for 10 years by Illinois-based LMT (Lewis Machine and Tool). A supplier of 100 percent U.S.-made weapons and accessories to SOCOM, military units, and LE agencies, LMT Defense is well known to AR-platform rifle fans for its line of Defender 5.56mm rifles and the MRP CQB, a true user-interchangeable barrel system based around a one-piece, lightweight upper machined from a single piece of aluminum and chambered in 5.56, .204 Ruger and 6.8SPC.

LMT has taken that MWS concept of the MRP and scaled it up, literally, to give the modern LE operator a .308 platform capable of hitting the streets as a 12-inch barreled CQB weapon, that with a torque wrench and all of two minutes, can have the barrel swapped out for a 24-inch match barrel to transform into a tactical marksman’s rifle. The beauty of the .308 MWS’ monolithic rail platform is that the buttstock, pistol grip/fire control mechanism with ambidextrous magazine release button, fore-end mounted forward grips, optics and the like can all remain in place, allowing the operator to train and gain familiarity with his primary weapon. 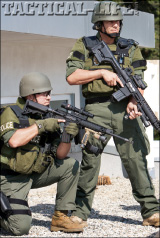 TW’s Test Weapon
Our test LMT Defense .308 MWS came out of the Pelican case with a heavy, 1:10 twist, 16-inch machine-gun-steel barrel. Rail covers, Ergo’s rubber pistol grip and Magpul’s heavy duty PRS buttstock provided our contact points with the new .308. Tipping the scale at 13 pounds, the MWS was heavy without being uncomfortable to handle. And by the way, the gun is clearly marked “.308” as opposed to 7.62x51mm NATO. While considered by many to be interchangeable cartridges, there are slight but distinct differences between the .30 caliber military loadings and their civilian cousins. We didn’t have unlimited time with the MWS and so sped the rifle to the Angeles Shooting Ranges in the Angeles Forest north of the city and hit their concrete shooting benches.

The big LMT is chambered for the readily available .308 Winchester round, and its 20-round magazine welcomes a host of accurate and tactical application ammunition. Firing off GG&G heavy duty bipod from the bench, Federal’s 168-grain boat-tail hollow-point Match ammo printed groups that averaged just over .75 of an inch at 100 yards. Groups with Hornady’s 110-grain TAP-FPD personal defense round opened up slightly but still hovered around the MOA mark.

Hands-On With S.W.A.T.
We got the gun into the hands of several members of the Arcadia, CA Police Department Tactical Squad. Symptomatic of the changes in Southern California society, these S.W.A.T. operators find they have to deal with an increased level of violence from illegal-alien drug dealers, preying on the fringes of this beautiful city.

We supplied team members with the new .308 MWS and a 5.56 LMT MRP CQB for comparison. As these officers are gun “gear heads” they took the two rifles and immediately checked them out for feel and ergonomics. Compared to the 16-inch direct impingement barrel on the .308 MWS, the 5.56mm MRP came equipped with an 18-inch stainless direct impingement barrel, Trijicon’s new 30mm tube 1-4X Accupoint and a Gear Sector two-point sling.

Fire control on the .308 MWS is straight AR, with its excellent ergonomics and familiarity. Safety, bolt release and magazine release were all within the reach of the operator’s shooting hand. LMT has even made an ambidextrous mag release standard on the MWS—a boon not only for left-handed shooters, but those forced to reload from cover. The MWS and its lower-powered MRP sibling were clearly family. In fact, except for weight, the only tipoff that the MWS chambered a larger round than the 5.56 MRP was the larger mag well and the stretched distance between the barrel takedown bolts predicated by the longer chamber.

After kicking around under the hood, the Arcadia S.W.A.T. officers were ready to hit the roof of their headquarters with the two LMT Rifles. The LM .308 MWS has 19 inches of top rail space, making it easy to find proper position and eye relief for the Aimpoint Comp 4 Day optics. After a few hours with the MWS and the S.W.A.T. team members navigating narrow rooflines and cramped stairwells with the .308, they were ready for their analysis. They gave high marks to the I-Beam-strong feel of the MWS’s monolithic upper that creates its solid, unified feel, but they weren’t thrilled by the large Magpul SRS Stock.

Stock Options
Luckily LMT will supply the MWS with any of a number of available stock options. Agencies looking to obtain a long-barreled .308 MWS to only fill their needs for a precision tactical rifle should opt for the adjustable-cheek-pieced Magpul SRS. For those looking to procure the .308 MWS as a truly modular LE system, Lewis Machine’s excellent six-position SOPMOD stock would be preferable as standard issue. The SOPMOD, when fully extended on a long-barreled MWS, would serve as a marksman’s stock. Fully closed with a shorty barrel installed, it would make the weapon a superior patrol and raid gun.

With optional carbine and rifle-length MilSpec barrels to be manufactured from machine-gun-grade steel and the plethora of compatible accessories on the market, in any configuration, Lewis Machine & Tool has created an a AR-based .308 that can serve both as a patrol rifle and a dedicated marksman weapon. For more information visit lewismachine.net or call 309-732-9527.