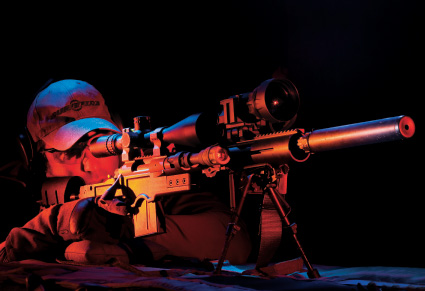 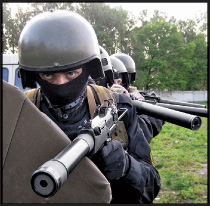 Military special operations personnel use suppressed weapons to advantage in particular mission scenarios. The U.S. Navy SEALs, British SBS (Special Boat Service), Italian COMSUBIN (Comando Raggruppamento Subacquei ed Incursori Teseo Tesei), German Kampfschwimmers, and other combat swimmer units find that suppressed SMGs or pistols fit their missions particularly well. During ship assaults, suppressed SMGs lower the noise level in steel passageways and compartments, allowing operators to hear communications from other team members or movement of the enemy. They are also useful for ship assaults in which compartments may contain fumes or other flammable materials, as suppressed weapons cut muzzle flash. The reduction in recoil provided by a suppressor will make recovery time and control of the weapon on full auto much easier as well. When carrying out a MAT (Maritime Anti-Terrorism Mission), a combat boarding may require that any sentries or enemy personnel on deck of the ship be quickly and quietly eliminated. At these times, suppressed weapons are the weapon of choice.

Combat Swimmers are often tasked with carrying out clandestine raids in which suppressed weapons are invaluable as they allow the quiet elimination of sentries or guard dogs as well as the removal of lights or the destruction of surveillance cameras on ship or shore installations, with minimal noise. U.S. Navy SEALs may have the mission of hitting a high-tech facility and destroying sensitive machinery. A lot of rounds may be fired into high-tech panels or systems with less chance of alerting an entire base if a suppressed weapon is used.

Other military SpecOps personnel use suppressed weapons for similar missions on land or even in the air. I say “in the air” because in some countries the mission of countering aircraft hijackings falls to special ops units within their Air Force. When acting as air marshals they sometimes carry suppressed weapons, once again at least partially to lessen chances of fire but also to make it more difficult for a hijacker to instantly identify their positions.

For units charged with anti-terrorist hostage-rescue missions, the suppressed weapon can also be invaluable. When clearing a large building, the lower sound signature of the suppressed weapon may give operators entering from different points a few extra seconds as terrorists hesitate in an attempt to identify whether or not they have heard gunfire. When clearing multiple rooms quickly, the lowered sound level will allow operators to communicate more readily and hear terrorist movement more readily, and it will also allow them to concentrate more fully on carrying out their missions. Operators who must quickly make a shoot/no shoot decision under stress can do so without the additional stress of noise and muzzle blast or flash. Bear in mind as well, that operators carrying out room-clearing ops may be “stacked” on one side of the door or may be carrying out simultaneous entries from both sides of a door. In either case, they may be close to the weapons of other team members when they are fired.

Calming Effect
Suppressed weapons are less likely to panic hostages should rounds have to be fired in close proximity, which will allow operators to gain control of them and get them evacuated more readily. Of course, many uses already mentioned such as eliminating terrorist sentries and knocking out lights will apply during hostage rescue operations as well. In fact, the power is often cut during a rescue to give the operators an advantage since they will have NVGs (night vision goggles). The use of suppressed weapons will cut muzzle flash, making it more difficult to exactly locate the operators when they fire and not degrading their night vision or ability to see through the NVGs. I have been told by members of a high-speed national anti-terrorist team, too, that when all of their operators are equipped with suppressed weapons, they can identify a “Tango” (terrorist) because of the muzzle flash.

Other special operations including raids, personnel snatches, or individually targeting high-value personnel targets, are all facilitated by suppressed weapons. For urban operations, suppressed weapons are invaluable as they make it very difficult to identify from where shots are being fired, and do not tend to panic innocent civilians as does audible gun fire. Some suppressors for special ops usage are actually designed to mask the sound so that it does not seem to be gunfire. In fact, suppressors for special ops usage are sometimes described as follows: “They don’t make the operator silent but they do make him invisible.” When firing at night, the operator with a suppressor will be extremely hard to locate if the enemy cannot see a muzzle flash.

Special ops or tactical law enforcement snipers may use suppressor-equipped rifles as well. Since snipers normally work in small teams—sometimes just the sniper and observer—keeping their location hidden is very important. As a result, the fact that a suppressor will obscure the sound and source of the shot, as well as cutting muzzle flash and blast, the latter of which can cause grass or leaves to move, makes the suppressor a real boon. I’ve been told by snipers who have used suppressed rifles that those attempting to identify the direction of a shot from a suppressed sniping rifle are often off by 60 to 90 degrees. That can save a sniper team if counter-battery fire is called in on their suspected location.

Suppressors for Any Weapon
Even the largest sniping rifles, such as .50 BMG anti-materiel rifles, have been used with suppressors, which can cut recoil substantially and make these more powerful rifles easier to shoot. Note, too, that many experienced snipers believe that a well-designed suppressor can actually allow more accurate shots. The recoil reduction helps but so does the fact that a suppressor uniformly removes gases around the bullet, thus allowing its path to be truer.

Members of security teams find that suppressors can be extremely useful, particularly when it may be necessary to engage from a vehicle to break an ambush or to deal with a vehicle-borne attack. A security team in a vehicle is in a confined space that will magnify the effect of sound, muzzle blast and muzzle flash. Add the fact that they need to communicate with each other—“Tango coming fast on your left!”—plus be able to hear radio comms from other vehicles, and the importance of suppressed weapons is obvious. The driver will need to concentrate entirely on evasive high-speed maneuvers in a contact situation; hence, the less sound, blast, and flash he has to deal with the better—he will already likely have hot brass raining down him. Additionally, many security teams today will be armed with rifle-caliber weapons, making the value of suppressors even greater. For security teams, I normally feel carbines or SMGs with muzzle suppressors are better as the suppressor may be removed for normal operational use and affixed for motorcade or other vehicular operations.

There are some advantages to suppressed weapons, too, for local S.W.A.T. teams and local police patrol officers. Many urban S.W.A.T. teams do raids in areas that are hostile to police; hence, keeping the sound of gunfire down may also lessen the chance of attracting a large, hostile crowd. Many raids are carried out in the early hours during darkness and should it be necessary to shoot, less attention will be attracted then as well. Patrol officers might also find the availability of suppressed weapons—perhaps in patrol sergeant’s cars—useful when it is necessary to put down an animal which has been hit by a vehicle. Even in large urban areas, deer are frequently hit by vehicles, as are other animals. This is not a tactical use of the suppressor, but it is one that lowers the anxiety level of local civilians.

Built-In or Attached?
When a unit acquires suppressed weapons, there is the choice to be made of whether to have detachable muzzle suppressors or integral suppressors. The major advantage of the integral suppressor is that the barrel around which the integral suppressor fits has been modified so that there is some control over the velocity of the bullet. As a result, some ammunition, especially in .22 long rifle and 9x19mm, which are slightly over the supersonic threshold, may still be fired subsonically. The integral suppressor has proven very effective on some 9x19mm SMGs such as the HK MP5SD. Unit armorers must ensure that the weapons have proper sights that are tall enough for when add-on suppressors are used, though today suppressor diameter is generally small enough that this is not the issue it once was. With pistol-caliber weapons, particularly, subsonic ammunition should be available to maximize the sound suppression. The suppressed weapons may be used with supersonic ammunition and they will still perform many of their desired functions, but they will not eliminate the supersonic crack of the projectile.

Firearm sound suppressors have been around for a century or so and their evolution continues today. Modern high-tech suppressors are very efficient and most importantly do not require the maintenance that many older designs necessitated. Special police and LE units around the world now use suppressed SMGs as a matter of course and many also use suppressed rifles or pistols. Current state-of-the-art suppressors have led to a “quiet” revolution in SpecOps armament. 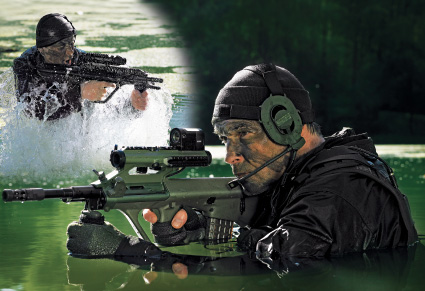 There are myriad applications where suppressed weapons provide a tactical advantage. The suppressor remains…