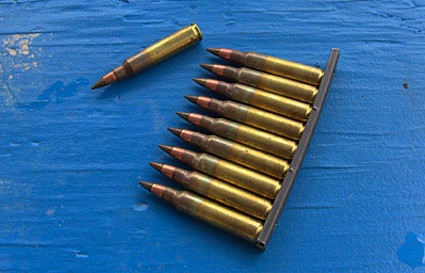 Tell a Soldier he’s loading “environmentally friendly” ammo into his M4 mag and he might be skeptical about whether it’s as effective as its lead counterpart.

But Army officials here say the new M855A1 Enhanced Performance Round — with its steel core instead of a toxic lead slug — is far more effective than the current round, doubling the effective range and for the first time giving M4-wielding Joes the ability to penetrate barriers once reserved for higher-caliber rounds.

“There’s a stigma among Soldiers about something that’s ‘green,’ ” said Lt. Col. Jeff Woods, the Army’s small caliber ammunition product manager. “This is a clear case where making something environmentally friendly works for us.”

Originally the effort to field a lead-free small caliber round stemmed from Clinton-era edicts to clean up military firing ranges seeping toxic lead residue into area ground and water. After frustrating attempts to develop alternatives with expensive materials such as tungsten and bismuth, the Army found steel and copper did a better job at a lower price.
In 2007, responding to reports from the field that current rounds weren’t deadly enough, the Army jump-started efforts to make a more lethal round that was also environmentally friendly. In less than two years, the steel-tipped M855A1 design was shown to be more effective against a wider range of targets than the decades-old M855 round — or even than the Army’s 7.62 round, officials here said.

Citing security concerns, engineers were cagey about describing how the new round works when it hits a human body. But Woods said it has “more consistent” effects on soft targets than the current round, or even the 7.62mm bullet.

“I can’t say that it’s more lethal than the M855. That depends on how the round hits a target,” Woods said, emphasizing that accuracy is paramount. “But what I can say is that you’ll see the same effects every time with this round. And we can confirm that it is superior to the [M80] 7.62 on soft targets.”

About 30 million of the new EPR rounds have been fielded to Soldiers in Afghanistan. The service plans to replace all their lead-cored bullets with the new M855A1 “black tip” rounds by the end of this year, though older “green tip” rounds will likely remain in the inventory for a while, officials said.

“There’s nothing out there right now that can perform like this [M855A1] round on this wide a range of targets,” Woods said.

© Copyright 2011 Military.com. All rights reserved. This material may not be published, broadcast, rewritten or redistributed.