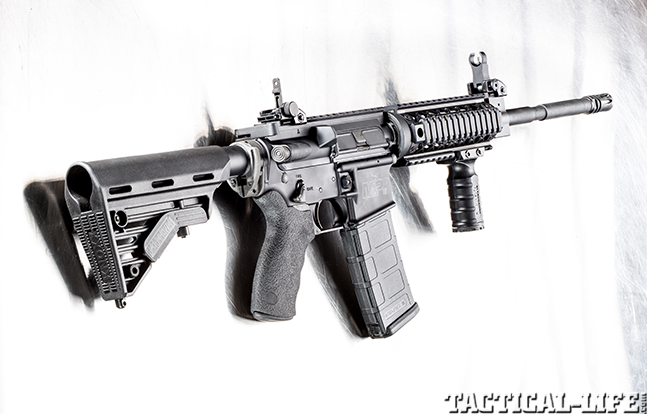 1 of 5
Next Gen AR-15 Upgrades From BlackHawk
An ergonomically friendly pistol grip and ambi safety/selector are part of BlackHawk’s AR accessory line. 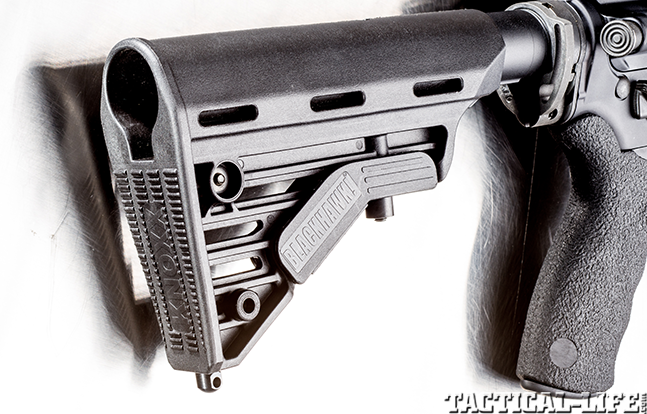 2 of 5
Next Gen AR-15 Upgrades From BlackHawk
Designed for serious work, the reinforced stock has an integrated metal stud in its toe. 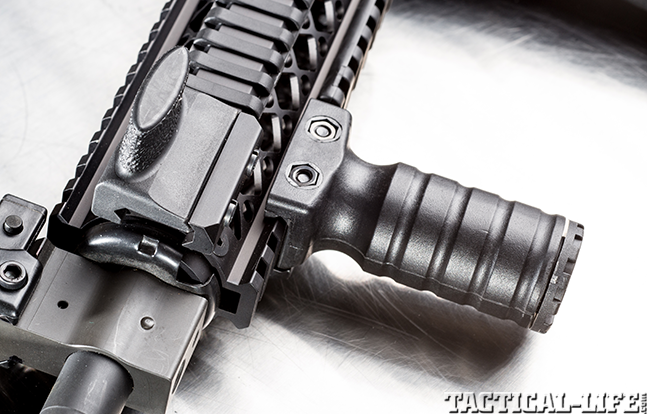 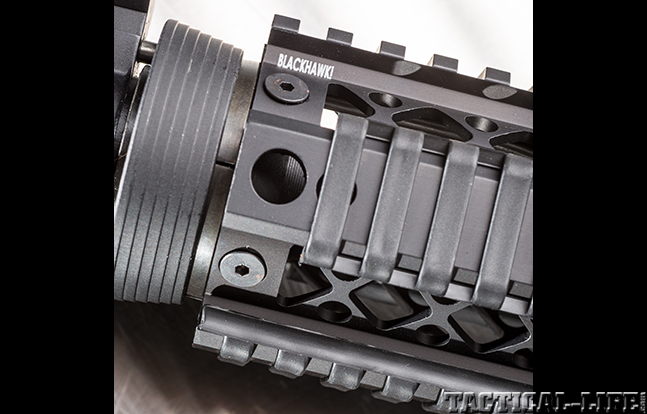 4 of 5
Next Gen AR-15 Upgrades From BlackHawk
BlackHawk’s rail covers fill the void between Picatinny rails, saving your hands. 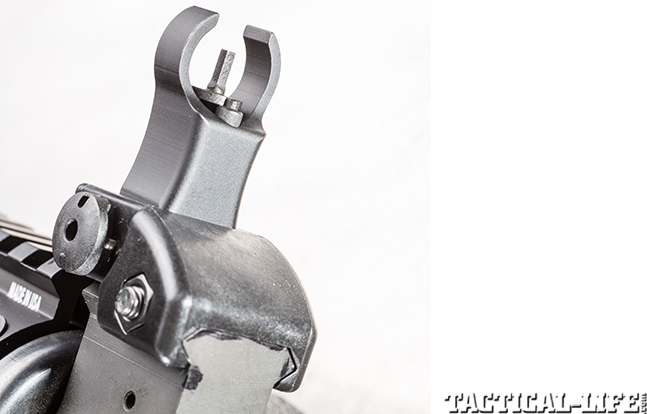 5 of 5
Next Gen AR-15 Upgrades From BlackHawk
Blackhawk offers a number of easy-to-install AR upgrades such as these quick deploy back up sights that are great for use with optics. 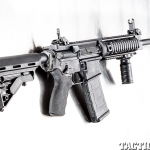 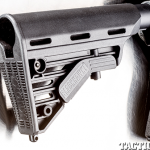 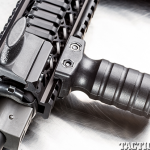 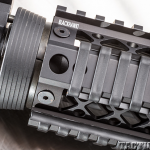 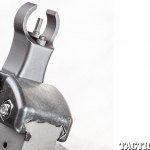 I used to associate BlackHawk with tactical apparel and accessories, but the company recently expanded its product line to include AR accessories. During a factory tour of the company’s Montana facility, where the famous Serpa holsters are made, a group of writers, myself included, were introduced to some of their products.

Later, at the range, we were each issued an S&W M&P15OR rifle and a full complement of BlackHawk accessories. In a matter of minutes we had each customized our AR carbines to suit our tastes before hitting the firing line for some instruction with BlackHawk’s professional shooter, Todd Jarrett.

I was impressed enough with the rifle and accessories that I ordered one for my own use as a house gun. The ability to accessorize and customize the AR is one of the reasons this rifle has become America’s favorite gun. BlackHawk’s parts are designed so the majority of work can be done by the user, without the need for gunsmiths and expensive specialized tools.

My S&W M&P15OR carbine uses a standard M4-style collapsing buttstock and has a commercial receiver extension, or buffer tube as it is more commonly called. To remove the buttstock, I depressed its release lever and pulled it to its most rearward position. By pulling down on the lever pin, the stock can be pulled completely off the tube. At this point I added BlackHawk’s AR-15/M4 Ambi Sling Adapter. Unlike most other manufacturers’ designs, this part does not require the removal of the buffer tube’s castle nut. It slides over the tube and is tightened with the included wrench. With this part in place, I slid the new BlackHawk collapsing buttstock over the tube.

into the toe of the stock. But what I like best about this part is that it provides smooth and noiseless adjustment, and locks securely into wobble-free position.

For its intended use as a defensive house gun I needed to be able to add a light to my rifle, and the easiest way to do that was to add a BlackHawk railed handguard. The two-piece, aluminum handguard easily replaces the issue plastic handguards. One unique feature of the BlackHawk product is its steel inserts, which guarantee rigidity even after a great deal of use. There are also four setscrews to unitize the two halves and eliminate any movement. This is especially important if you’re using a laser designator so that your point of aim/impact does not shift. BlackHawk vents its handguard to dissipate heat, and I like the part’s slim profile, which reduces hand fatigue during extended range sessions or perimeter duty. I also used BlackHawk’s rail covers, which fill the gaps in the Picatinny rail rather than covering them and making their outer diameter uncomfortably large. BlackHawk’s rail covers come in 18-slot lengths and can easily be cut to the desired length.

Designed for improved weapon control and to avoid burning your hand on the handguards, the BlackHawk Rail Mount Vertical Grip attaches to the handguard’s rail with two clamp screws. The reinforced polymer part can be used as a stubby or you can attach a 1.5-inch extension for a full-length grip. There’s also a storage compartment that seals with an O-ring, which is perfect for storing optics batteries.

Thumb rests are becoming popular with 3-Gun shooters for consistent indexing of the support hand and using it as a rest against barricades. BlackHawk’s Rail Mounted Thumb Rest attaches easily and allows for ambidextrous operation. When used in conjunction with the vertical grip, it makes a carbine very easy to point!

With its given mission as a home defense gun, my intention was to mount an EOTech holographic sight as the primary optic on this gun. But I also wanted to include backup iron sights. The S&W M&P15OR is a flattop, 16-inch-barreled carbine with a railed gas block. BlackHawk makes both front and rear sights that lock solidly into their stowed positions out of the line of sight of the optics, yet they deploy instantly thanks to spring pressure. The sight housings are made from molded polymer for an optimal strength-to-weight ratio. The rear sight uses a single “hybrid” aperture that’s machined from aluminum, while the front sight is steel and can be adjusted for elevation in the traditional manner. A semi-circular hood protects the front sight post. When combined with the rear sight, the set makes for a quick and easy-to-see sight picture.

The world is awash in tactical slings and it can be confusing. I rarely use a sling, but when I do I want something uncomplicated that will let my carbine hang ready for rapid access while my hands are doing something else. BlackHawk’s Storm Single Point Sling XT fits my needs exactly. It features a 1¼-inch-wide nylon webbing for comfort and has a great deal of adjustability. To attach to my BlackHawk single-point sling mount there is a plastic encased MASH clip for quick, positive attachment and detachment. I adjust my sling so the end of the buttstock hangs just below my sternum, and this gives me quick access to the weapon yet lets it hang out of my way when my hands are needed for other tasks.

Customizing your rifle is all part of the fun of being an AR owner and BlackHawk offers just about every option you can think of. I found its AR parts and accessories to be first-rate! Each component comes with easy-to-follow instructions and will make user installation easy and hassle free. 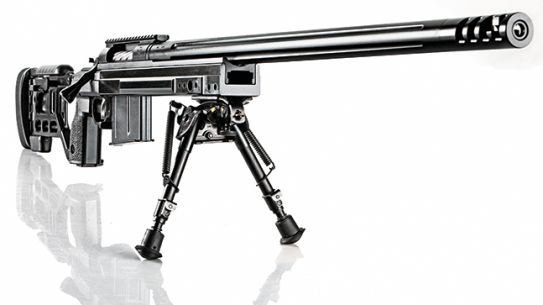 Turn cover into concealment with the Primary Weapons Systems MK3, a sub-MOA .300 Win... 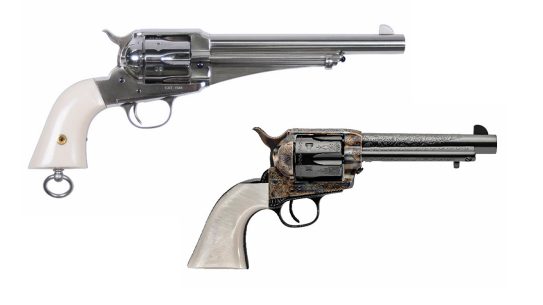 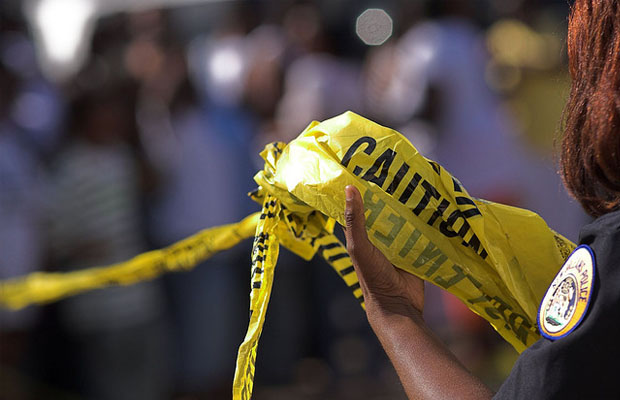