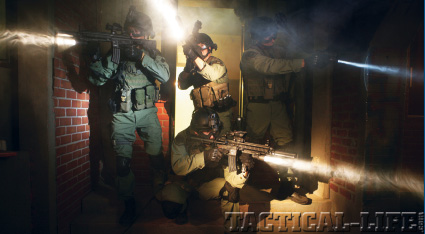 Developing a small, compact and amazingly bright flashlight was just part of John Matthew’s vision. The President and CEO of SureFire realized that his new illumination tools, in the hands of law enforcement officers, could help save lives. To best utilize his products he realized that techniques and tactics needed to be developed to maximize their potential.

In 1996 the SureFire Institute was founded to disseminate low-light tactics and doctrine. As much a “think-tank” as a training school, it was the first operation to make force-on-force training a key component of every course, and every principle was validated in the crucible of man-on-man combat using paint-marking projectiles. Bill Murphy, SureFire Institute’s current Director of Training, said, “Originally the training was somewhat ‘Jedi Knight’ in nature with a lot of time spent on extreme force-on-force simulations. We still utilize force-on-force as an important learning tool, but the training has also evolved to address the current needs of law enforcement and military professionals. We teach them not only how to fight with a light, we also enhance their ability to use it as a tool to search, communicate, control, and to gain whatever tactical advantage is possible.”

The commitment shown by SureFire to increase officer safety and survival far outpaced what any other flashlight company was doing at the time. SureFire invented the pistol-mounted laser sight in 1979, the weapon light in 1986, and the handheld tactical flashlight in 1988.”

Murphy said, “At the time, a lot of flashlight companies had night shoots but they were very rudimentary and overly simple. What happened was that SureFire came in and raised the technical level, and increased the use of the light with the firearm and made it safer for them to use. Everybody had the idea that a flashlight was needed but they didn’t know how to use it. And, a lot of times when they did use it, it compromised their safety because they didn’t understand the benefits of different techniques.”

“Using the light as a force option — by shining it in their eyes — we achieve a certain amount of control over them. They don’t resist, they don’t fight and they are dealt with in a controlled manner. Or they react to the light and decide to fight but now they are fighting against the light-not necessarily against the officer. So, if the officer is holding the light away from their body the bad guy is now shooting at their light and this allows the officer to shoot effectively because they can see their target.”

Murphy continued, “If we go into a room and it is dark the advantage is held by the guy in the room because he knows where the door is and the officer entering is generally going from a lighter area to a darker area. But when we can change the environment by changing the lighting conditions that makes it better for us because the hidden person’s eyes become dark-adapted and are more readily affected by the light.”

Technical Experts
Matthew’s strategy at SureFire was to surround himself with the most technically competent experts that he could find, whether it is in designing powerful flashlights or finding personnel to man the new SureFire Institute. Case and point is Bill Murphy, the SureFire Institute’s director of training. Well-known in law enforcement circles, he is a career law enforcement officer with 29 years on with the Huntington Beach California PD. Not only was he a SWAT officer but has also spent the last 17 years as an instructor at Gunsite. Murphy is known as an innovator and spends a lot of time traveling the world and exposing himself to other techniques. In fact, he told me during a phone interview that his last evaluation stated, “…that I must continue to go around the world, teaching and training with other people and bring the best techniques back to Huntington Beach PD.” His extensive LE career, his ability to teach and innovate, made him a natural choice to head up the SureFire Institute’s training department.

Doug Martin, a fellow SWAT team member of Murphy’s, was one of the first recruited for the Institute. His Hollywood smile and rugged good looks have garnered him a number of TV and movie credits, and his law enforcement resume is equally impressive.

According to Murphy, “We developed doctrine together and were pretty good at recording a lot of information and putting it down on paper. We have about ten other guys around the country that work as instructors for us. We take instructors with a certain set of skills but then train them up so that we all teach exactly the same thing. We want to make sure that people are getting the same message across the board. There are many ways to attack problems but as long as we do it in a uniform approach, it makes it easier for people to repeat it and use it effectively.”

Training
Law enforcement, military and private security and contractors are eligible to attend the SureFire Institute. But you don’t need a badge to avail yourself of this type of training. Bill Murphy does civilian training through his company, Firearms Training Associates (877-554-4867; ftatv.com). Said Murphy, “Anybody with a CCW should be able to get good training. We don’t want them on the streets with a gun and a flashlight, and not be able to work them. We also do classes at Gunsite for civilians and teach them the fundamentals of flashlight use.” Those interested in scheduling a class for their department or agency should contact SureFire’s Bill Murphy or Stuart Jager for class availability. Agencies can either attend the SureFire Institute facilities or host the class themselves.

“We recently took the show on the road to the Army, Secret Service, NYPD and the Marines, all in a four week period. We just went from training site to training site…” said Murphy.

If you’re a bean counter and wondering just what the cost/benefit ratio of this training is, consider this…up to 25% of officer involved shootings are of unarmed suspects, according to Murphy.

“Imagine if you could eliminate 25% of lawsuits just through training: that’s an incredible number. The flashlight with a properly trained officer allows them to react sooner and stop a potential threat to themselves more effectively. We don’t shoot the person that shouldn’t be shot but when it is time to shoot, we can do it quicker. I have attorneys right now struggling to get my training material. Any time you have wrongful death situation it is generally going to be in a diminished light situation. The lighting conditions that we usually work in actually give us the vision of someone that is legally blind. So, how can we make good decisions when it would be impossible for us to read an eye chart immediately in front of us?”

If the officer survival benefits of the SureFire Institute aren’t persuasive enough to authorize funding for the class, then maybe the risk management aspect will be what it takes for your officers to get the training that they need. For more information on classes, availability and scheduling, check out SureFire’s website at surefireinstitute.com or call 800-828-8809. 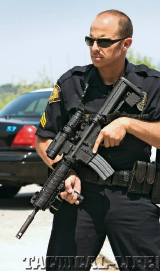