Today’s law enforcement officer carries more gear on his belt than Batman. Besides extra ammunition, there are handcuffs, a chemical weapon, a portable radio, flashlight, expandable baton and maybe even a Taser. In addition to this, modern coppers are likely to be wearing soft body armor, packing a folding knife and a cell phone. With several different force options at his/her disposal, an officer can effectively deal with all sorts of resistive behavior. 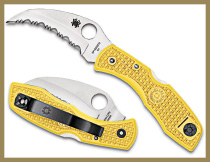 So where does this leave the off-duty law enforcement officer? In addition to the handgun, one needs to consider what other sort of gear they should be carrying. Obviously, it’s not possible to carry the same equipment as a uniformed patrol officer but there are some basic tools that should be part of the mix.

So what do we really need to carry, in addition to that gun and spare ammunition? Not a great deal really and you’re probably hauling most of it around already. To my thinking, the list of essentials goes something like this: a cell phone, a small flashlight, a knife and a less-lethal tool.

What follows is a run-down on some products that I feel can fill this role very nicely. Your needs may vary slightly, but tools outlined herein can go a long way in keeping you safe.