With the introduction of the Aimpoint CompM5, the manufacturer has certainly upped the ante in the red dot sight market.

The CompM5 is a new offering from Aimpoint. It’s “new” in the sense that it recently became available to the public in late 2017, but that doesn’t mean it’s truly “new.” Aimpoint isn’t in the habit of using its customers as test subjects. After all, just look at the what’s out there — lots of red dots that look like an Aimpoint. It’s often said that “imitation is the greatest form of flattery.” 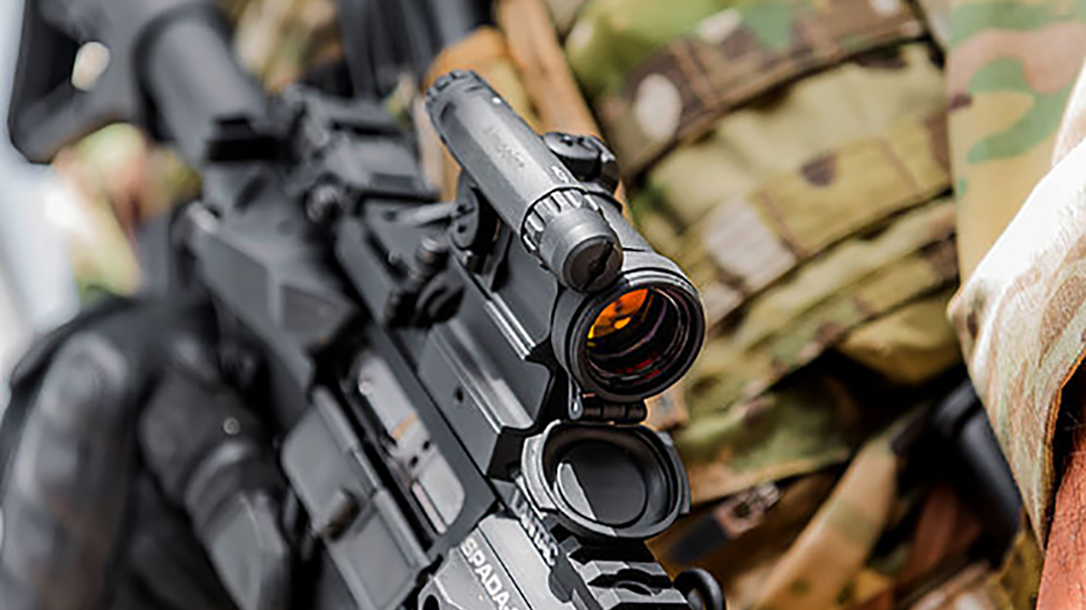 No, as per usual, Aimpoint perfected the CompM5 before going to market.

A small group of Swedish entrepreneurs got together with one goal: “To create a sighting technology that would allow shooters to acquire their target quickly, and to hit moving targets in all weather and lighting conditions consistently and accurately.”

Gunnar Sandberg founded Aimpoint back in 1974 and the rest, as they say, is “history.” Fast Forward to today and we find some of the markets best red dot offerings (reflex sights) being offered by Aimpoint.

The CompM5 may be new to the civilian market, however, as mentioned above, it’s not really “new.” The CompM5 has been in use by our government’s Diplomatic Security Services for a spell. Several foreign governments have also used the CompM5 for their “secret squirrels,” military and law enforcement alike.

As I was informed, Aimpoint designed the CompM5 at the request of a “specific customer.” The customer needed a compact sight that ran off of alkaline batteries for air travel. I’ll just let your imagination run wild trying to figure out who that mystery shopper was.

So, Aimpoint’s engineering and design team went to work. Now, we have the CompM5.

Weighing in at 5.2 ounces with just the sight itself (no mount) is an amazing feat in itself, especially since Aimpoint really beefed up the construction of this “micro dot.” More on that in a bit.

While some may point to the CompM5 and say that it looks similar to a T2 or H2, only with a different battery, they’re not even close. The CompM5 is actually a first for Aimpoint.

Aimpoint told me that the CompM5 is actually the strongest Aimpoint sight to date due to its “7075 high-strength aluminum” build. Aimpoint manufactured most of its previous optics from 6061 Aluminum.

Rather than a harder-to-find watch- or camera-type battery, the CompM5 utilizes a commonly found AAA battery; that’s another first for Aimpoint.

You can even choose to use a Lithium FR03 battery if you prefer it. A quick web search netted me prices where one can literally get twice the amount of AAA batteries at half the price of the more expensive CR123A types. That right there is a huge selling point.

Aimpoint informed me that it also chose to use a “Secondary Window” option for the CompM5. By doing so, they have greatly increased the optic’s “water submersibility and water impact capabilities.” Designed with military and law enforcement in mind, this makes sense. Again, the CompM5 is Aimpoint’s most “beefed up” optic. 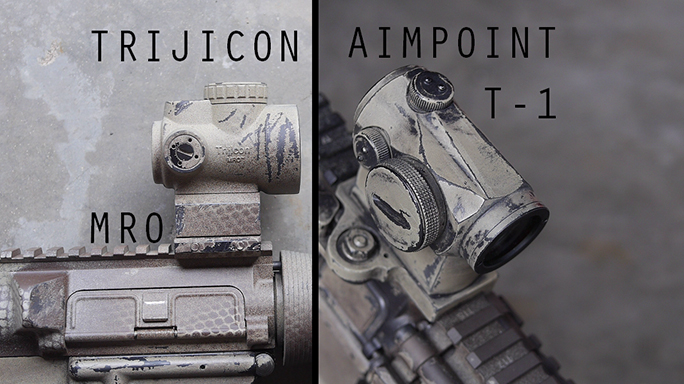 The CompM5 really is a tiny micro-dot. The battery tube (for lack of a better term) is actually longer than the main optic body itself; sticking past the included lens covers only by a hair on either side.

The version I opted for is called their “AR Ready” package. It came with Aimpoint’s 39mm spacer and Micro LRP Mount.

Aimpoint states that the LRP (Lever Release Picatinny) Mount is a true return to zero mount. I didn’t notice anything to the contrary, as it’s been mounted on two different caliber ARs as of this writing. However, I may just throw this on my buddies Barrett M82A1 to see how she holds up. Overall, it locks up tight on the rail and feels very solid when mounted.

There are 10 total power settings — positions 1-4 being for use with a night vision device and positions 5-10 for day/night use.

I found position No. 8 to be the sweet spot for me. I’ll just leave it on 8, swap out the batteries once a year, and call it a day. I don’t gamble with my tools. AAA batteries are cheap, and this will be on my main home defense rig — ’nuff said.

Since Aimpoint claims that this is night vision compatible, I decided to put it to the test. Using a TVN/PVS-14 L3 Gen 3 OMNI VIII and the darkness, I was able to see a nice clear and crisp dot in settings 1-4.

The front flip-up lens cap is solid black and would need to be opened to use the optic. However, it’s up to the individual user on the rear lens cap as it is clear. They even painted a small diagram on the battery tube to show how the battery should be inserted.

It comes with a 10-year warranty to the original purchaser for personal use and two years for professional/competition use. I’ve yet to utilize Aimpoint’s warranty in the many moons that I’ve been abusing its products, so keep that in mind. These things would not be in use by “a specific customer” if they weren’t ready for the rigors of combat. Various Aimpoint models have been in use by the greatest fighting forces to ever grace a battlefield: The United States military. If they trust taking Aimpoints to battle, so can you.

The CompM5 is a serious investment. Aimpoint’s “AR Ready” package, which includes the 39mm spacer and LRP mount, has an MSRP of $1,079. The “basic” CompM5 (no mount) has an MSRP of $902. Again, you definitely get what you pay for here — and that is arguably Aimpoint’s most well-built red dot.

I have played with a great many number of red dots on the market. If I had to grab only one (non-magnified) reflex type sight, mount it on my battle rifle and march off to war, without question it would be the Aimpoint CompM5. When ounces equal pounds and pounds equal pain, I want a micro-dot.

The CompM5 is a game changer. If a battery dies, I can simply raid my junk drawer for a AAA battery until I can get to the store to buy a fresher battery. Having that piece of mind is nice. Overall though, this is one solidly built micro-dot. Aimpoint went all out with this one.