If you’ve ever been shopping for an engagement ring, you probably know the ring should cost you so many months of salary, or in some cases years of salary … depending on how smitten you are. Nonetheless, some of you have or will try to get by with less expensive options, hoping for a positive and acceptable outcome. 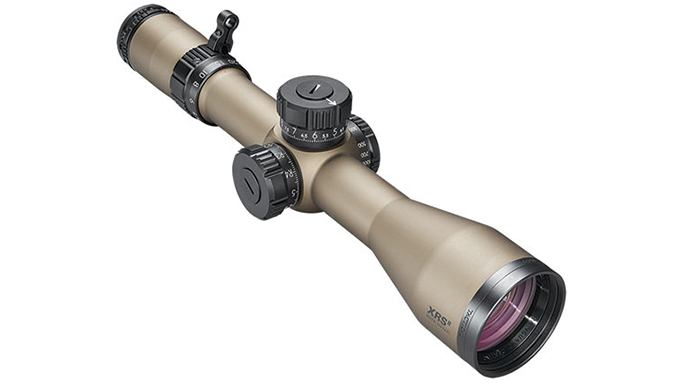 You could and should apply this mentality to rifle optics. Regardless of the rifle you own, if you want a satisfying, precision-shooting relationship, you’ll want to consider superior optics. And if I’m bing honest, these too can cost a few months salary or maybe even more. But I can assure you spending money here will bring you happiness, and perhaps even more than the person you bought the ring for.

In case you didn’t know, Bushnell has been on a seriously aggressive path with the introduction of its Elite Tactical line of riflescopes. This brand extension ushered in new levels of quality and performance that got people paying attention, to what was previously just another name in also-ran hunting riflescopes, this guy included.

The latest offering in the line of souped-up, rethought products is the Bushnell Elite Tactical XRS II. The XRS II is what happens when a company reaches out to some of the most accomplished shooters out there and actually listens to the feedback they are given. “We polled the top shooters in the PRS circuit, as well as our pro shooters … we listened”, says Jacob Edson, product master of the Elite Tactical line.

The XRS II has the largest range of magnification that Bushnell currently makes but doesn’t come at a penalty of excessive weight or poor optical clarity. The XRS II is one of the lightest scopes on the market for this magnification range, weighing in at 2.38 pounds. It also features ED Prime glass with Bushnell’s exclusive EXO barrier that resists water, oil and scratches. It also greatly resists fogging up, thus giving the shooter a big advantage in less than ideal weather conditions.

While glass is important, we don’t hear enough about consistent and accurate tracking. This is one of my greatest concerns in an optic, because if you’re dialing for elevation (or windage) and those clicks aren’t concise, you’ll have a problem that you may never be able to diagnose. Heck, you might even sell your rifle or change your ammo because you think it doesn’t shoot, when in fact it could be an optic that doesn’t track properly. Edson told me the tracking is extremely accurate on the XRS II because of design and extremely tight tolerances that are kept by the Elite Tactical line.

Another benefit that the XRS II has is its easy-to-use RevLimiter Zero Stop. This is also a feature that can be overlooked. I fully expect to be whipping out user manuals every time I want to set a zero stop regardless of manufacturer. The XRS II also has a pop-up, locking wind turret and locking diopter, as well as a magnification throw lever included.

Getting back to my original point on price—the XRS II retails for $2,299.99 to $2,399.99. That’s not cheap, nor should a truly high-quality riflescope of this capability be. When it comes to optics, taking shortcuts will always cost you more money and headache in the end.

If all this isn’t enough to convince you to pony up the bills for a good optic, keep this in mind: this year’s King of the 2 Mile ELR match winner used a Bushnell Elite Tactical XRS II on his .416 Barret. He had to dial 35 mils of elevation from his 1,000-yard-zero. Still think that tracking isn’t important? You get what you pay for. As such, the Bushnell Elite Tactical XRS II is a solid and dependable choice for the discerning precision shooter.

You can find the XRS II at bushnell.com.