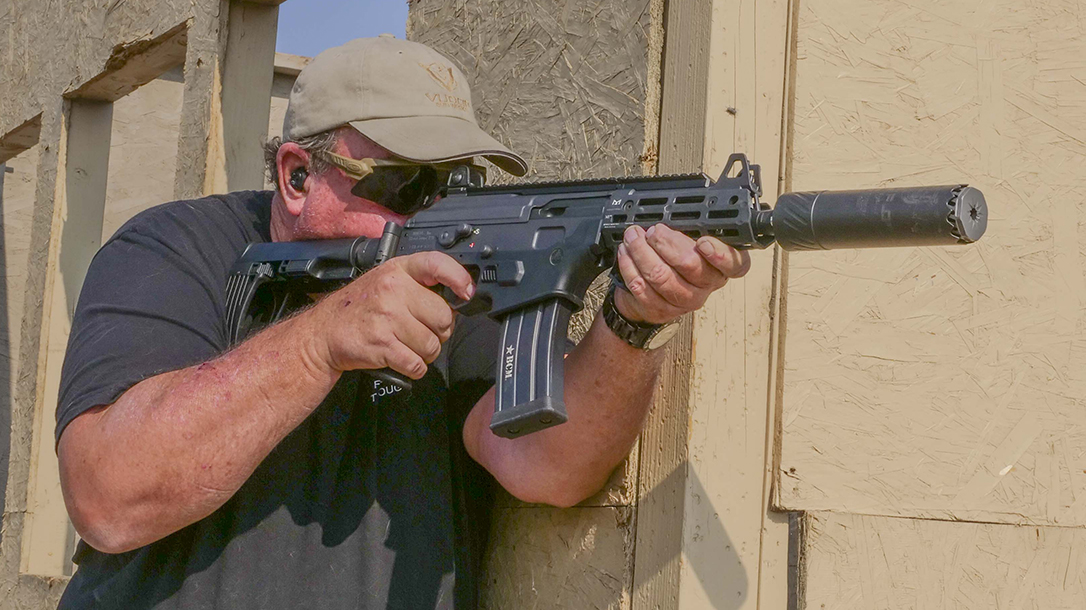 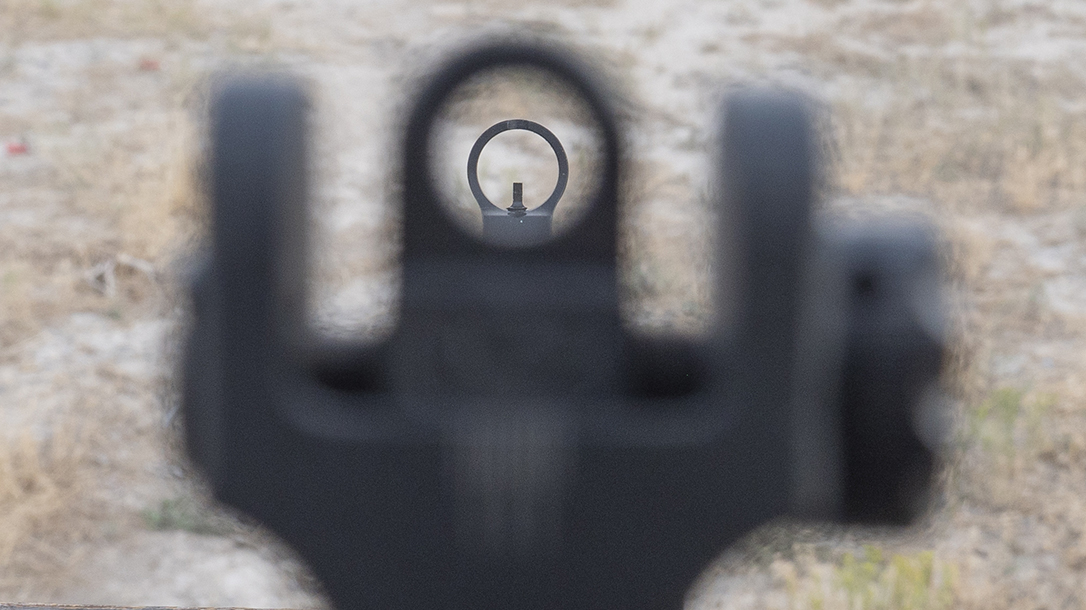 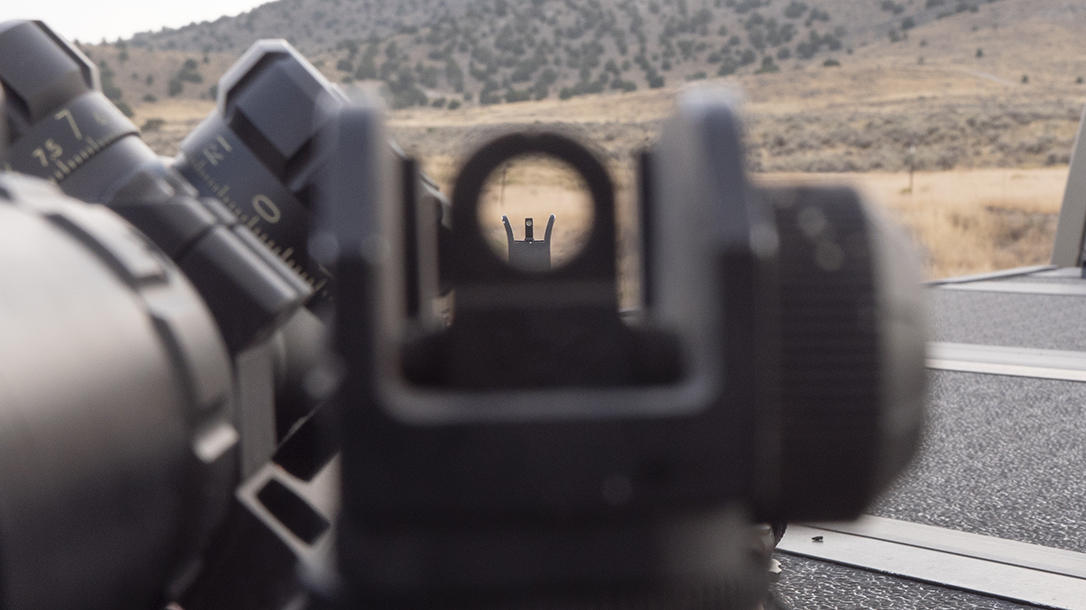 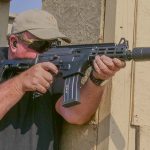 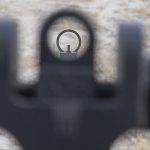 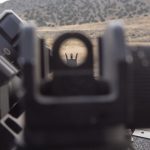 Hopefully you already know this, but movies, television shows and video games aren’t real. Self-defense is simpler and less cinematic. Encounters outside of a military engagement can be solved with a simple carbine, iron sights and a couple magazines. Sure, there are scenarios where iron sights aren’t exactly ideal, but such events aren’t common. I believe a trainer shooter can handle most situations with a solid set of iron sights. 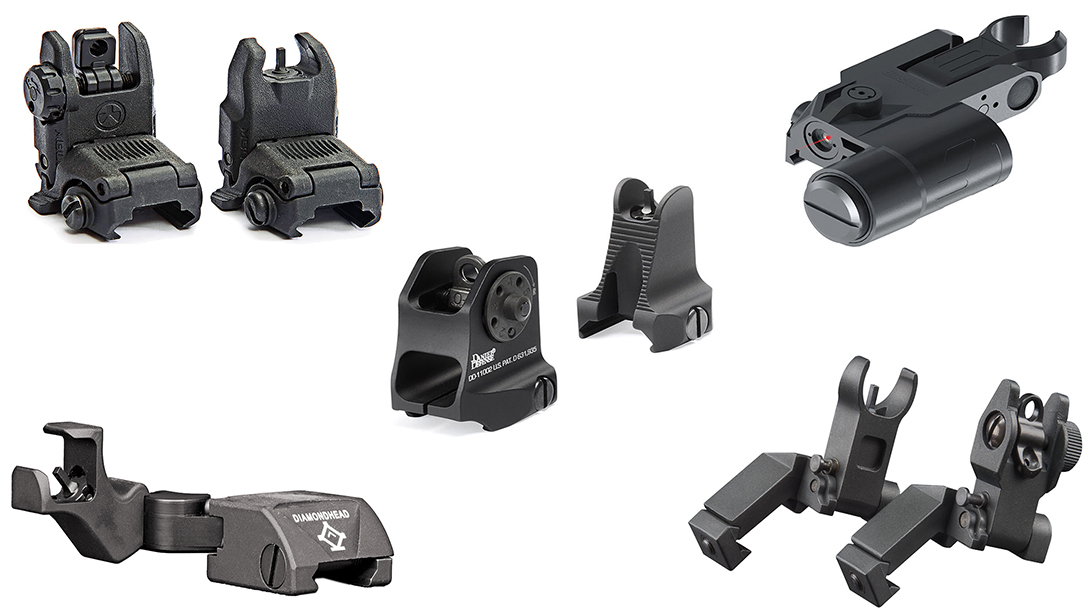 The vast majority of civilian shootings occur inside 50 yards or across a room. Combining statistics of recent police engagements using carbines shows that they occur mostly between a couple houses, in the front yard, behind a car or across the street. So, using realistic parameters, let’s take a look at what to do in a real self-defense situation and the equipment available to get it done.

Over the years, iron sights became relegated to a “backup” role. Like the tiny pistol you carry but hope to never use in a fight, a backup iron sight is something you have but never expect to use. If they are the only sighting system on your pistol, don’t scrimp. The same goes for carbines. Cheap folding sights with no means of adjustment are not primary sights. If you’re not using a scope or reflex sight, your iron sights don’t need to fold; in fact, my preference is that they don’t—at least not the front sight. Your standard A2 front sight base, part of the gas block, is fine, and several similar styles will mount to your top rail. You want iron sights that are rock solid, easy to see and designed for fighting.

Red-dot sights are “fast.” Or so I’m told, but just like having a reflex sight on a pistol, mine aren’t really on my carbines for speed, but convenience. The biggest advantage of red dots is that you don’t have to alight two sights, and they’re fantastic when shooting from awkward positions or if you’re weighed down with cumbersome gear, especially a gas mask. But if you’re at close range and precise alignment isn’t necessary, red dots are typically slower for me. After years of running HK diopter sights, I’m much faster using them at CQB distances.

If precision is needed, I align the two ghost rings, putting one circle inside the other so the shadowing is relatively equal. Otherwise, I stay target focused, put what I want to hit in the center of the front circle and press the trigger. To that end, I used to remove the post from my HK front sight just for practice. It’s important to know your zero so you can line up shots quickly without worrying about lighting conditions, for example. And in that same vein, with a good set of iron sights, you won’t have to worry about your red dot getting “washed out” by a strong light.

Several companies make completely covered front sights that work the same way. They come standard on the FN SCAR, and you can get them on an HK416. Griffin Armament makes a great set of angled sights with a fully protected front unit. Another good choice is a bar/line sighting arrangement that’s much easier to pick up when you’re close. Sights with big dots are nice up close, too, but they don’t provide much better service than a red dot. With sufficient practice, you can fold your rear sight down and get most things done with the front sight alone—something I’ve done for years with my shotguns.

For longer-range work, there are several different posts you can choose for your front sight and various ways to adjust for elevation with the rear. Thin posts or blades are great; I regularly hit 400-yard silhouette targets with the 115-year-old blade sights on my M1903 Springfield. At long range, they don’t obscure much of the target, making holds easier. My preference for shots at 300 yards and closer is a Trijicon tritium post. It’s great for low light, and the flat top allows me to line up my shots more precisely. Zero the front sight for a hold under the target and you can reach out a long way.

In most cases, the front sight is adjusted to your preferred zero and elevation is handled by holding high on the target or adjusting the rear sight. If longer ranges are in the cards, pick a sight you can adjust easily on the fly. The SCAR’s sights are great, and so are standard A2-style units like Dueck Defense offset sights. Typically, holds work at 300 yards, so rears that require tools to adjust are fine. You can also get tritium inserts for your ghost-ring rear sight; they’re nice, but they aren’t critical. Given how close your eye is, it’s also hard to see them sometimes, and I personally never use them. 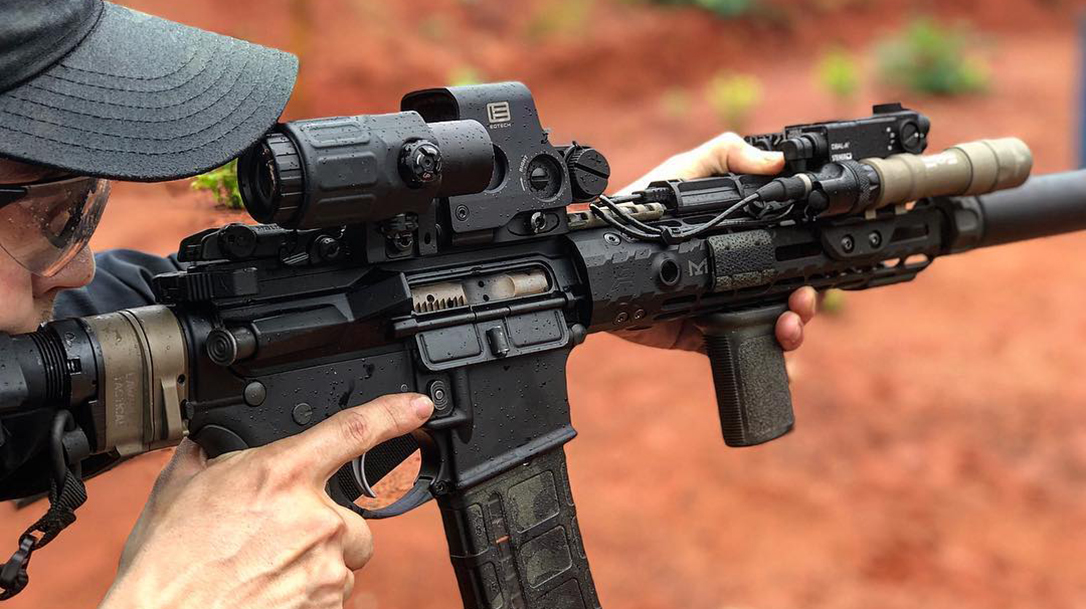 Using iron sights effectively takes practice, which is why red-dot sights are so popular these days: In tactical realms, they allow department trainers to become note-takers instead of teachers. A proper zero is critical with any sight, and it’s absolutely mandatory with iron sights. There are several ideas out there when it comes to distances for zeroing, but it doesn’t matter so much which one you choose as long as you intimately know whichever one you do choose. Practice is also necessary at any range you will likely experience in a self-defense situation, from across the room to the farthest distance you may encounter. In other words, you need to know where to hold your front sight no matter the situation.

The rear ghost ring was designed so soldiers could use the large out to 200 yards and then switch to the smaller aperture for greater distance. For anything up close, across the lawn or maybe even across the street, definitely use the larger hole. You want to know where the front post is on the target while it’s somewhere in the middle of the rear aperture. If you need more precision, then line up carefully, but at that range you’ll have more wiggle room than you would think.

When taking photos for this article, I zeroed a rifle’s red-dot sight at 50 yards in relatively low light, and my target was a 6-inch steel plate. At 59 years old, the “dot” I perceived was just three sparkles, so I couldn’t see the target. So, I cranked up the reticle brightness, and it was as clear as a bell. I mention this because you won’t always be 30 forever, and sometimes equipment is not an advantage but a liability. Does this mean I’ll drop my red-dot sight? Nope, but it’s definitely something to consider.

Red-dot sights remain practical and popular for a reason. Night-vision devices make them almost a requirement unless you have an infrared laser, but you’re adding thousands of dollars to the cost of a rifle either way. Some agencies use night-vision goggles, but very few (and by comparison even fewer outside the government) have $5,000 to spend on one pair. This doesn’t mean iron sights are useless. However, they lack all that is necessary for the task fighting at night.

Red-dot sights are great tools, but they aren’t the only ones, nor are they magical or flawless. If it’s electronic, it can fail, and to think otherwise is just foolish or even dangerous if lives are on the line. If you can afford expensive sights, great! Just don’t overlook or ignore the things you can do with practice and a good iron sight set. Your life could depend on it. 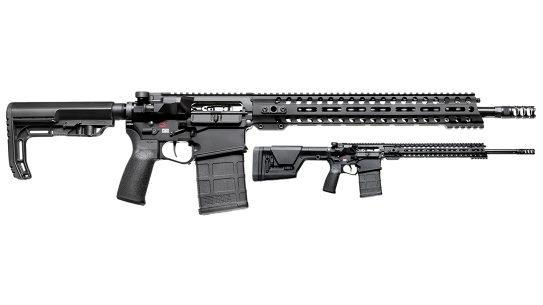