The red-dot reticle can be adjusted to 10 different brightness settings, two of which are night-vision compatible. This makes it adaptable to just about any ambient lighting condition.

Nikon has long been respected by shooters for its quality binoculars, spotting scopes, rangefinders and riflescopes, but until now, it had never produced a miniature reflex sight. That changed this year due to increased consumer demand for red dots by competitive shooters, as well as those who want “urban” rifles and PDWs for personal protection. 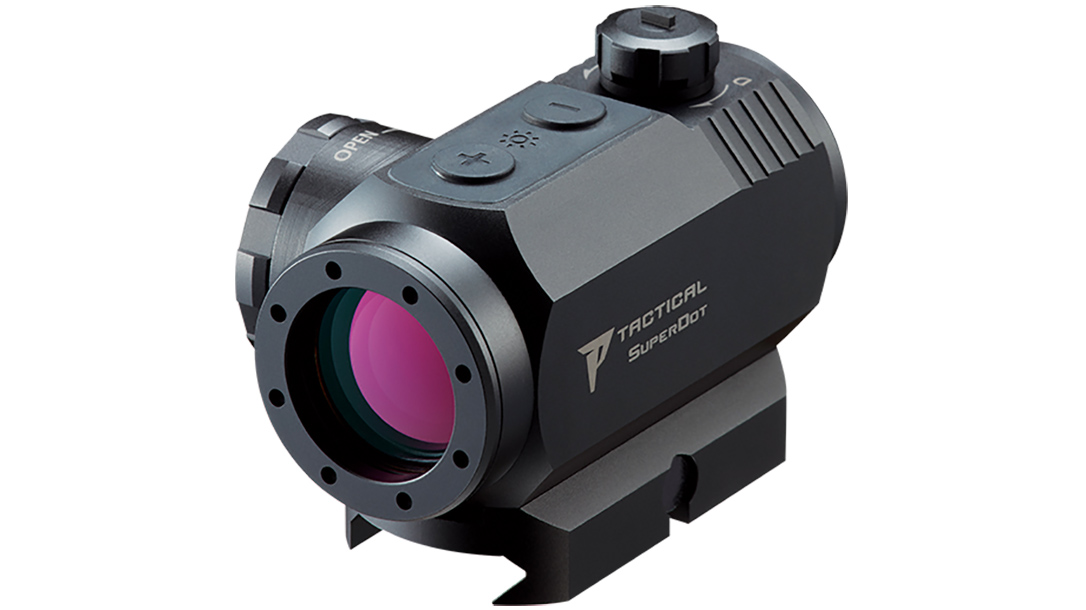 These sights are popular because they are often superior to scopes, lasers and iron sights when targets are engaged out to 100 and 150 yards. Compared to most other sighting systems, many people find red dots provide faster target acquisitions. They also allow you to shoot easily with both eyes open. This makes them just about ideal for close- to medium-range targets.

The P-Tactical Spur is both high tech and rugged. The sight’s lenses are multi-coated with Nikon’s TRUCOLOR, which minimizes bluish tint color distortion throughout its wide 27mm viewing window. The red-dot reticle can be adjusted to 10 different brightness settings, two of which are night-vision compatible. This makes it adaptable to just about any ambient lighting condition.

Its 1.1-ounce body may be small, but it’s designed to handle the recoil of a tactical shotgun using full-power slugs. The P-Tactical Spur also has 1X magnification. This makes it parallax-free, and it offers unlimited eye relief.

Another very desirable feature is its long battery life. This optic will run for 15,000 hours on a single CR1632 lithium battery. The optic also has a 12-hour automatic shutoff feature to save battery life in case it is accidentally left on. Finally, the sight has a water resistance rating of IPX7, which means it can be submerged in 1 meter of water for up to 30 minutes without damage.

Using the sight is very straightforward. First, you need to insert a battery into the chamber just behind the viewing window. A special tool is provided to open and close the battery chamber cover. Remember to insert the battery with the positive side up.

This brings us to the windage and elevation adjustment dials. Your can use a laser bore-sighter to achieve a general zero and then move to the shooting bench and make final adjustments.

For a 62-grain .223 Remington cartridge, I use John Farnam’s point-blank zero in which the bullet crosses the line of sight at 40 and 240 yards. This is done by having the bullet impact about 2 inches high at 100 yards.

Since this sight has a 3-MOA dot, I sight as close as I can to 2 inches and then use my Sierra ballistic program to provide the most accurate estimation of the trajectory, entering the velocity readings indicated on my Competition Electronics chronograph.

A well-built optic deserves testing on an equally well-built gun. Therefore, I tested the Nikon with a customized rifle put together for me by Jamie Zern at the Florida Gun Exchange. I asked him to start with a 16-inch-barreled S&W M&P15 Sport II.

I chose this gun because I like the barrel’s 5R rifling. It doesn’t compress the bullet as much as six-groove rifling. 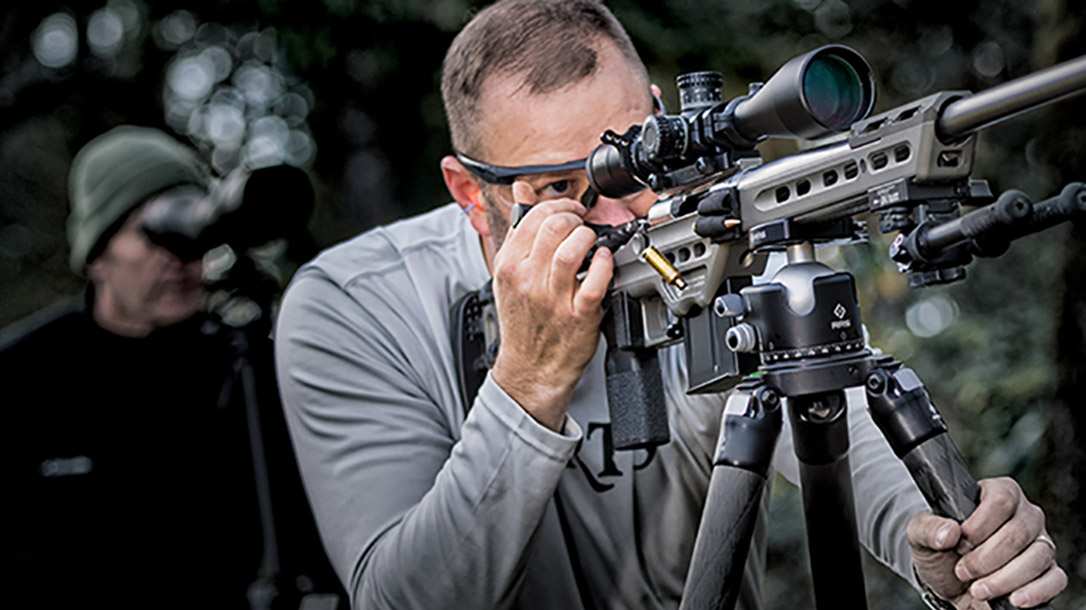 Also, this barrel has a 1-in-9-inch twist rate, which does a good job stabilizing the 55- to 77-grain bullets I prefer. The barrel also has an A2 flash suppressor that does not kick dust up when firing from a prone position.

Internally, the factory bolt carrier groip and trigger were replaced with an enhanced LMT bolt carrier group and a 4.5-pound Geissele Super Tricon trigger. The end result is a rifle that is highly reliable, easy to use and will consistently put five Speer 62-grain Gold Dot soft points into a cluster tighter than 1.5 inches at 100 yards.

After sighting in the P-Tactical Spur at the Volusia County Gun & Hunt Club, I ran it through several tests.

My first test involved shooting from a benchrest to get groups at 100 and 200 yards. I used Black Hills’ 50-grain V-MAX rounds to see how well the Nikon performed when fired from an MTM K-Zone rest. Two 5-shot groups at 100 yards averaged 3 inches. That’s not bad for a 3-MOA sight. At 200 yards, all of my shots were on the silhouette, but the group size increased to 9 inches. I attribute this to the sight’s 1X magnification as well as the effects of mirage on a hot day and a building East Coast sea breeze.

The second test was a drill involving two paper silhouette targets 20 yards away and 7 yards apart that depicted armed assailants. Starting from a low-ready position, as soon as my Competition Electronics timer sounded, I fired one shot to the center-mass of each target using Winchester 55-grain FMJs. I did this three times with the goal of seeing how quickly I could acquire and hit the targets. All of my shots were in the center-mass areas, and my average time was 3.1 seconds.

The final live-fire test involved using the same Winchester load to shoot a scenario using a simulated “storefront” shoothouse that the club built for IDPA matches. It has two windows and two doorways that open into halls. We placed three pictorial targets 20 yards downrange from the front of the structure. Each target received at least two shots to the chest and one to the head while pieing the corners.

The scenario was as follows: You own a liquor store, and as you go to open it up in the morning, you look through the window and observe a man inside attempting to carry off your cash register. You retrieve your rifle and enter through the front door. As you move down a short entryway, you don’t see the first man, but you do see another man leaning out from the backroom where your safe is. He has his gun pointed at you. You shoot him with three shots and move forward to see the first man hiding behind some wine bottles with a gun pointed at you. You shoot him twice in the chest and once in the head.

As you move to the counter, you look right to see a third attacker standing outside, pointing a gun at you. There are several bystanders. You neutralize this third and final target, again with three shots. My average time for two runs was 39 seconds. All of my shots hit critical areas, and didn’t strike bystanders.

The Nikon P-Tactical Spur delivered the performance I expected from a quality 1X red dot. It produced a wide, clear and sharp image. Its controls were easy to operate. It held its zero well. And it added very little weight to my rifle, even with a riser mount. At an MSRP of $220, it’s a good bargain.

This article is from the November/December 2018 issue of Tactical Life Magazine. Grab your copy at OutdoorGroupStore.com.