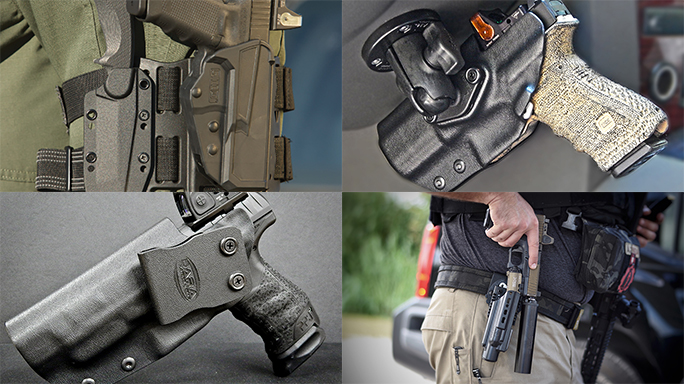 These RAM—R, A and M-Spec— sights are close-range optics built for everything from target shooting to law enforcement and military operations using ARs and shotguns. The sights are powered by a CR123A battery, offering up a battery life between 200 and 2,000 hours. In addition, a wide lens hastens target acquisition and provides a wide FOV. Meanwhile, quick-detach models include an improved QD lever, allowing a low profile that keeps the sights from snagging on gear or unlatching.

The first RAM Series sight is the Ultra Shot R-Spec, or Range Spec. Designed for target shooters and hunters, it boasts four reticles with red or green illumination; battery low indication which makes the reticle blink when the battery is low; 10 brightness levels; and slotted windage and elevation adjustments. MSRP: $155.

Next is the Ultra Shot A-Spec, or Advanced Spec. This aluminum-constructed model has many of the features as the R-Spec, but it also has six night vision settings, which allows the sight to work with night vision devices. In addition, the A-Spec is shockproof up to eight feet. Suggested retail on this one is $179.

Last up are the M-Spec LQD and M-Spec FMS. Geared toward LEOs, hunters and competitive shooters, the M-Spec is waterproof up to 40 feet and can withstand up to .50 BMG recoil. This fixed mount M-Spec also has motion sensing activation—five minute shutoff with motion activation, and 12-hour auto-off—to preserve battery life. Also included here is an integrated retractible sunshade that mitigates lens flare and protects the optic from the harsh weather. The M-Spec LQD is priced at $299, while the FMS is available for $239.

For more, go to Sightmark.com.