Trijicon recently broke new ground with the release of the industry’s first wind-mapping rangefinder. As such, the new Trijicon Ventus promises to be a game changer for long-range shooting.

Powered by WinPro Technology, the Ventus measures three-dimensional wind velocities at multiple distances out to 500 yards. Additionally, it ranges real-world, non-reflective targets out to 5,000 yards. This combination gives shooters and hunters data previously only obtainable by through expert experience.

Trijicon says it tests the Ventus to MIL-STD-810G standards. It features a rugged housing and scratch-resistant lenses for durability. The 9X optical magnification and center cross-dot reticle also aid in target acquisition at extended range. Simple, intuitive controls allow for ease of use and navigation of the menu. oversized buttons allow shooters to measure wind and range. Two rechargeable lithium 18650 batteries power the unit.

The rangefinder also comes in a Ventus X model, featuring a user-configurable on-board ballistic solver. It pairs with the Trijicon Ballistics Calculator App for a customized long-range shooting experience. The app will be available on both iOS and Android, offering seamless Bluetooth connection with the Ventus X. It stores shooter and target geographic locations, provides a ballistic solution and displays a wind map overlay of readings. 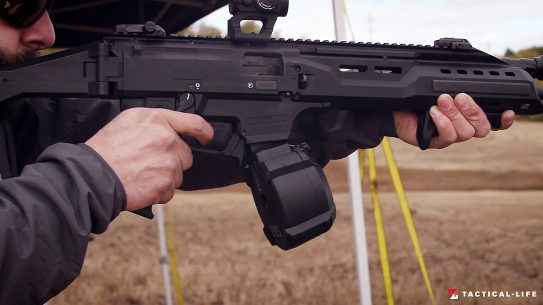 Providing 50 rounds of 9mm in a CZ Scorpion Drum Magazine, the Magpul PMAG...