One of the big surprises this year was that Para USA, the manufacturer best known for their high-capacity 1911 pistols, introduced an AR-15-style rifle. Licensing the gas system from Allan Zitta of ZM Weaponry, the rifle features Zitta’s trademark slider/folder stock, a free-floating handguard rail system and Yankee Hill detachable sights. It’s a sharp-looking carbine that possesses a number of features that deserve a close look.

I’d been aware of Zitta’s operating system for years but had always thought that it was a gas-piston system. I was wrong. Zitta’s design uses a specially modified gas key, which is called the Op Rod in Para USA nomenclature that extends for 10.5 inches through the upper receiver, over the barrel down to the gas block where it slips over the gas tube. An action spring is wrapped around the op rod and this spring replaces the conventional buffer tube spring. Para USA has trademarked the name “Delayed Impinged Gas System” (DIGS) to describe this operating system.

One of its big advantages is that it allows the use of a folding stock. Note that I said, “folding,” not collapsing. With the stock folded the overall length of the weapon is a surprisingly compact 26.5 inches. Renamed by Para USA as the Rapid Deployment Stock (RDS), it is designed to fold to the left side of the gun so that the stock could be deployed while a right-handed person held the gun with a firing grip. Once deployed, the stock can be adjusted 3 inches in length.

Another advantage of the DIGS gas system is that the gun runs cleaner. Because the gas tube does not enter the upper receiver, gas residue is not introduced into the receiver area. Excess gas is vented through ports on the right side of the bolt carrier that blow it out through the ejection port. Zitta reports there’s no need to clean the Op Rod area of the system.

“What I call the Op Rod is actually an extended gas key that is hollow. It is plated with electroless nickel and the gas tube is chrome plated. The Op Rod and the gas tube on the Tactical Target Rifle system intercourses itself and the wiping action of the stroke and pressure self-clean. Of course, you always want to clean the chamber, regardless of whatever system you use.”

The familiar M-16/AR-15 bolt is used on the Tactical Target Rifle and it locks up into the steel barrel extension, but the rear of the bolt carrier is removed. There’s no need for it, since this system does not use a buffer spring: Remember, the new Para USA rifle uses an action spring wrapped around the Op Rod. Because the bolt carrier is shorter by 2.90 inches, the forward assist is also moved forward and Para USA wisely incorporated the brass deflector into the assist.

Para USA outfits the Tactical Target Rifle with an aluminum free-floated handguard that possesses a rail system on its forward end. I don’t always use a vertical foregrip and this design is comfortable to shoot without one but still leaves that option available to the shooter. The top rail is perfectly indexed with the receiver’s Picatinny rail top and gives one the option of mounting an optic or red dot far forward of the receiver.

To access the DIGS system one first removes the top rail by depressing a spring-loaded plunger and then sliding the rail forward and off the handguard. Next, pull back the action spring and remove the spring retaining clip and ease the spring forward. Push out the takedown pin at the rear of the lower receiver, allowing the weapon to hinge open at the front take-down pin. 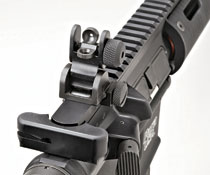 Piston Versus DIGS
Piston-driven ARs have become a very hot item in recent years and I asked Zitta if the DIGS gas system had any advantages over the piston-drive guns. “They (piston guns) cost more to make and you still need to clean the piston. Piston-driven guns keep more heat in the piston and the barrel; it doesn’t allow for the bolt carrier to work as a heat sink,” said Zitta.

While the upper receiver looks like a standard flat top receiver, it is actually 0.200 of an inch taller to allow for the op rod to go through. The charging handle is also taller to accommodate these changes. Zitta spec’d the feedramps to be cut lower to allow for different tolerance stacks, between manufacturers of magazines. Even though Zitta’s design has been extensively tested and evaluated, and even carried into hot zones by the military, his initial inspiration for its development was for competition.

“I was shooting the Masters and you could use anything with up to a 15-inch barrel and I first made some AR-type pistols that were manually operated. At that time the weapon of choice was the Remington XP-100 (a bolt-action single-shot pistol), so having a magazine-fed weapon allowed me to spend more time on target because you have a time limitation to fire a certain stage,” said Zitta. “Then the following year I went back with a semi-autopistol so I had to eliminate the buttstock and put the action spring over the barrel. I called it the ‘Master Blaster.’”

A couple years later the military invited Zitta to come down to their base and bring along some of his prototypes. After looking at the Master Blaster they asked if he could put a folding stock on it. That’s when he developed the Slider-Folder stock and the LR300 was born.

“It really was designed for the short barrel; in fact, that’s where the model name comes from. LR stands for ‘Light Rifle’ and the 300 stands for the effective range of an 11.5-inch barrel with a 55-grain FMJ bullet. Of course, that’s not to say that it wasn’t deadly at ranges beyond that.

“We had weapons that went over to Afghanistan in 2002 and spent time with a spec ops group. One operator came back and told of a 450-meter confirmed kill and one at 250 meters suppressed. All that and zero malfunctions,” said Zitta.

Range Time
To test the rifle’s accuracy I mounted a Trijicon 3-9x40mm AccuPoint scope on the Para USA Tactical Target Rifle. Shooting from a cement bench, I fired five shots to a group without giving the barrel any time to cool. Accuracy was better than expected and four of the six loads produced sub-MOA groups. “Your results don’t surprise me. Put good loads in one of our rifles and there’s no reason that it shouldn’t shoot under an inch,” says Zitta.

The new Para USA rifle uses a barrel with a 1-in-9-inch twist and this seems to be the industry standard since it stabilizes a majority of bullet weights with optimum accuracy. For corrosion resistance and ease of extraction, the bore and chamber are chrome lined.

For field shooting I removed the Trijicon scope and mounted Insight Tech-Gear’s Integrated Sighting Module (ISM-V). This slick unit provides the shooter with a red dot and a visible laser that are coaxially aligned. You can use either the red dot or the laser individually or together. Adjustable for brightness, the red dot is just 2-MOA in size and is small enough that it provides significant precision.

The ISM-V attaches directly to the receiver’s Picatinny rail and weighs less than 9 ounces. Insight claims that it has more than 1500 hours of run time from its 3-volt lithium battery. Insight also offers the ISM-IR, which possesses an infrared illuminator and laser designator for use with night vision gear for qualified military and law enforcement users.

I set up some steel targets at about 30 yards and had no problem hitting my mark using the red dot, even though it was a bright sunny Arizona afternoon. However, I did have a problem finding the visible laser at the same time. No surprises there; I’ve used enough lasers to know that they are most useful during periods of low light.

Shooting the rifle just after sunset, with a minimal amount of ambient light, I was able to consistently hit my steel targets at 100 yards using just the laser. Turning the red dot and laser on provided me with a single intense red dot when viewed through the sighting module. In use, I found the ISM-V to be as quick as any red dot or holographic sight. Its ability to perform two tasks makes this lightweight sighting module particularly attractive to those looking for a tactical electronic optic. 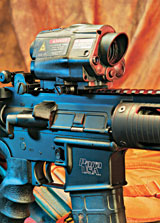 I fired around 450 rounds during my evaluation and found the inside of the upper receiver to be incredibly clean. I have to credit the DIGS gas system for keeping the gas residue out of the receiver. I wiped down the operating rod and residue was easily removed by wiping down the gas tube. Assembly of the weapon is in the reverse order and easily accomplished.

Para USA’s literature touts the Tactical Target Rifle as the fastest tactical rifle ever built citing that, “…having the recoil system up front over the barrel puts it where it naturally pushes the rifle back down on target instead of up and into your shoulder.” Honestly, I couldn’t feel the difference between the Para USA TTR and other AR rifles that I had brought along to shoot during this outing. But more experienced shooters may be able to realize the benefits of the DIGS design.

Todd Jarrett, Para USA’s professional shooter, had this to say about the new rifle: “For the past decade one of my top secret weapons in the competition world has been the Tactical Target Rifle. I have trusted it and used it exclusively. Its unique design lets me get on target faster with accuracy and reliability unmatched in any other rifle. And, it is just fun to shoot.”

I should note that Jarrett was shooting this rifle many years before there was any kind of licensing agreement between Allan Zitta and Para USA. Jarrett could have chosen any brand of rifle to compete with and he chose this particular rifle. He’s not alone, professional shooters whose income relies on winning matches also have chosen Zitta’s rifle. Rob Leatham and Mike Voigt, two of the top shooters in the world, also use this rifle. According to Zitta, “Leatham never even cleans his rifle. He just squirts oil on the moving parts from time to time.”

Besides offering complete rifles Para USA will, at some point, offer complete uppers that should fit on any AR-15 lower allowing users to convert their rifles to the DIGS system.

Throughout my evaluation I found Para’s new Tactical Target Rifle 100 percent reliable, accurate and fun to shoot. Zitta’s unique design, refined over the years at the highest level of competition and in the harshest combat environments, may prove to be the next logical evolutionary step for the AR-15 family of weapons. PARA-usa.com.

One of the big surprises this year was that Para USA, the manufacturer best…