Having the privilege to meet with Para USA and one of the founders and CEO Thanos Polyzos, it was indeed a pleasure to speak to one of the leaders in the firearms business. Having had many Para firearms over the years it was exciting to meet one of the leading innovators in the 1911 world. As a result of this meeting an opportunity to test their new TTR (Target Tactical Rifle) AR-15 rifle presented itself. This was a test of some interest having been acquainted with the operating system from its inception. It was a simple and innovative fix to a problem that persists to this day for the AR system. With just about every weapons manufacturer out there jumping on the AR15 bandwagon, and even more looking at piston systems, it was intriguing to see something different. Many of these piston systems deal with one part of the equation alone, the TTR deals with two.

It was several years ago the system in the Para USA TTR was brought to my attention. At the time the weapon of choice for me were a Heckler & Koch 53 or what was then a Gallil SAR and later on a Micro-Gallil. The HK was far more reliable and its roller delayed blowback system made it soft shooting and easy to control on full-auto. The Gallil offered a folding stock, something very handy on a SWAT team for sure. That simple little item allowed for easy placement in a case, trunk, or rack even with a longer barrel. The AR buffer system precluded the folder, and reliability, especially with short barrels, was spotty especially when dirty. More choices abound today, but at the time an AR was pretty much an AR.

ZM Weapons, a small Massachusetts rifle company owned by Allan Zitta, at the time offered fixes to both problems. The operating system was essentially a modified M14/AK47 idea. An extended gas key forms a sort of op-rod that uses a return spring. An alteration of the gas tube extends (or delays) it a fraction. This allows for a delayed blowback of sorts. In doing so the chamber pressures are allowed to diminish, meaning you need less force to cycle the bolt. That allows the bolt to be smaller so that the buffer system can be removed. It also adds positive bolt pressure increasing reliability. So, it was reliable dirty, shot cleaner, had about zero felt recoil and muzzle rise, and had a folding stock. It was a really nice fix to the problems the AR suffered from. The only issue was simply the cost. In 2000 the retail on the rifle was around $1,800 and with a goodie or two you could easily get into the $2,000 price range. That seems about the norm today, but consider in 2000 the department price on a short barreled AR15 or M16 was around $600 or so. Officers could buy an AR in M4 furniture for about $750. The cost at the time just made it impossible for most officers and police agencies to even consider. It ended up mostly in the hands of competition shooters and the military shooters that could get one. Well, it seems the price of these weapons has caught up. With piston uppers in the $1,500 range or higher, and most of the big name complete guns retailing at $2,400 the then LR 300, now Para TTR is right in the middle of the fray with the rest of them. 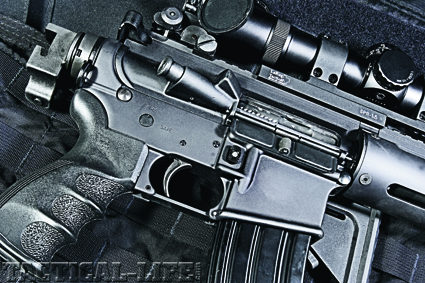 The TTR’s lower can accept standard AR trigger parts, allowing users to customize the rifle to their preferences. Note the unique combination shell deflector/forward assist unit on the upper receiver.

Para USA purchased the rights for this design in 2007 and has introduced this rifle as the Para TTR (Tactical Target Rifle). The gas system is described as a Delayed Impingement Gas System. Just so there is no confusion this is not a gas piston system, it is still a gas impingement system. The design attaches an op-rod to the carrier that goes over the gas tube. The gas tube is extended up into the top of the handguard making it longer. This essentially delays the blowback. Although very simple, it was revolutionary for its time and is still incredibly ingenious today. It lowers the chamber pressure prior to the unlocking of the bolt, which allows for more positive extraction. This in turn produces a number of effects. It allows for a smaller and shorter bolt carrier, which means less felt recoil. Once you shoot this rifle it becomes clear it is pretty much recoilless. It vents most of the gas into the handguard and not into the action. This means it runs cleaner longer.